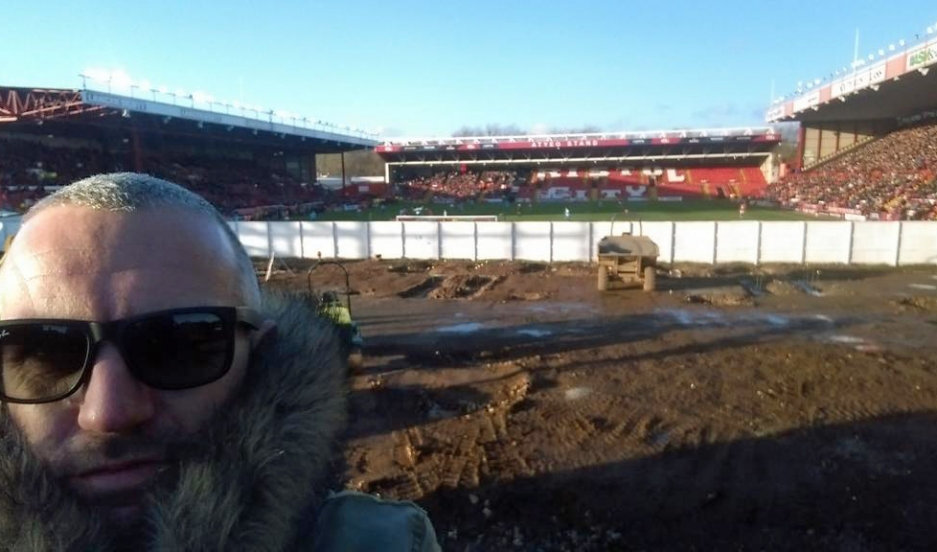 Every soccer club in England has at least one thing in common: an area of its stadium that's home to its loudest, most dedicated fans, who chant and sing throughout the 90 minutes of every game. Bristol City, a club in England’s third tier of professional soccer, isn't any different — or at least it wasn't.

That's because the East End stand of Bristol City's Ashton Gate stadium is missing. The club tore it down so it could build a new one, part of a piece-by-piece redevelopment project that aims to turn the stadium into a modern venue, luxury boxes and all.

Instead of the East End, the club now has Ben Swift. For years, he was a regular in the stand, attending "pretty much every home game." When the East End came down, he lost his spot.

But Swift gained a special benefit: He lives in a house right behind the demolished stand, and his long, thin backyard houses a garden shed that's just a couple of fences away from the playing field. All Swift has to do is climb up onto the shed's roof and enjoy the view.

“It’s certainly different from what you’re used to,” Swift says. “Just 'cause it’s yourself on a shed roof, not actually in the stadium. It’s quite good fun.”

He’s there on top of his shed for every Bristol City home game, the only person getting to watch the game from that vantage point. He even has a big sign that labels his shed as the East End.

Swift occasionally eggs on the fans inside the stadium with special signs, telling them to sing a chant or start a wave.

The other fans have noticed, and he's now something of a celebrity. Swift has his own Twitter account and almost 1,500 followers, though he has to run inside to post his shed photos: The WiFi in his house doesn't reach out to his perch.

He's been profiled on Bristol City's YouTube channel and, in early December, even the New York Times got in on the act.

Swift says he doesn’t mind all the attention. He sees it as good publicity for Bristol City, and English football in general.

“I was saying to a few guys the other day, after the New York Times article, that it’s good that you guys over there are actually being able to see that there’s a good level of football below the Premier League," he says. "And if we can convert a few of you guys from the other side of the pond to Bristol City fans, all the better.”

Just been sent this from a friend on holiday in NY haha pic.twitter.com/M5uL6c4pvw

But Swift’s good fortune can't last forever: Construction on the new East End Stand is already underway. He figures he’s got about another month of free soccer viewing from atop his shed. Then he’ll have to go back to buying a ticket and watching along with everyone else inside.

That’s not necessarily a bad thing, Swift says. He’s starting to feel a bit lonely out there by himself.