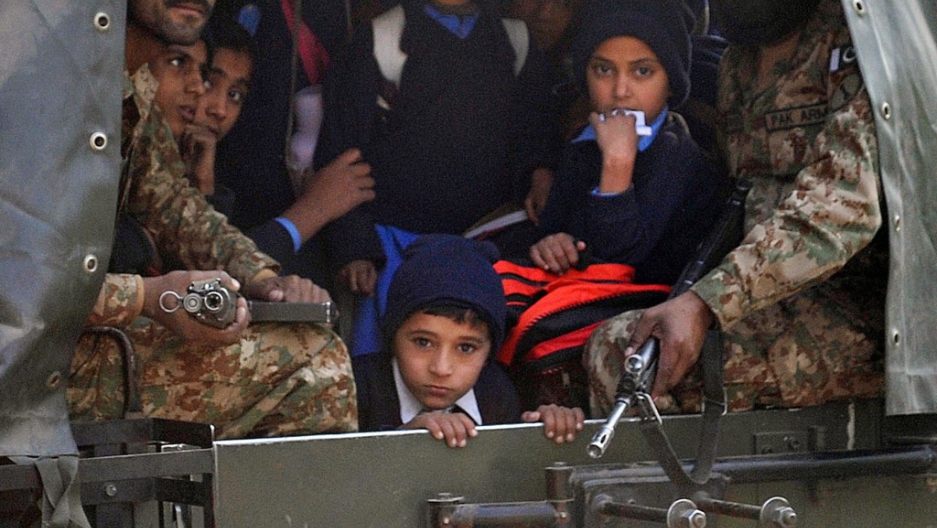 Pakistani soldiers transport rescued school children from the site of an attack by Taliban gunmen on a school in Peshawar on December 16, 2014 (A Majeed/AFP/Getty Images)
Credit: A MAJEED
Share

A group of militants from the Pakistani Taliban, also known as Tehrik-i-Taliban Pakistan or TTP, stormed the Army Public School in the city of Peshawar today, killing 141 people, most of them children.

There are many questions to be answered, and perhaps the most obvious one is: Why target a school full of children?

It's too early to fully understand the reasoning behind the attacks, but here are at least 3 important things that help explain why the group targeted this particular school at this time:

Pakistani soldiers patrol at a destroyed empty bazaar during a military operation against Taliban militants in the main town of Miranshah in North Waziristan on July 9, 2014

This, so far, is the TTP's stated justification for the attack. It's also, probably, the most direct cause of the attack.

"We selected the army's school for the attack because the government is targeting our families and females," a Taliban spokesperson, Muhammad Umar Khorasani, said. "We want them to feel the pain."

Pakistan's military has been going hard after the Taliban since June, when it launched "Operation Zarb-e-Azb," a major assault in North Wazirastan, the mountainous region on the border of Afghanistan that's become a TTP stronghold and a safe haven for several other militant groups, such as the TTP-allied Haqqani Network. It's a place the New York Times has called a "vibrant global hub of jihadi money, ideology and fighters."

The United States had been pressuring Pakistan to launch this type of operation ever since Al Qaeda militants slipped across the border and set up camp in the region at the beginning of the US war in Afghanistan in 2001. As the US has drawn down its military operations in Afghanistan, some Pakistan authorities have looked to the border region with growing anxiety about the future, and a wave of TTP attacks in early June, including an assault on the Jinnah international airport in Karachi, confirmed that something needed to happen. The operation has displaced hundreds of thousands of people and destroyed entire towns.

An army-administered school allows the TTP to launch a symbolic attack on the military without a direct engagement.

2) A history of targeting schools

The attack comes less than a week after Malala Yousafzai accepted the Nobel Peace Price for her advocacy work related to girls' access to education. Since the TTP's failed attempt to assassinate her in 2012 — when she was 15 years old and an increasingly visible champion of girls' education in Pakistan — Malala has become a global icon, a campaigner for girls' education around the world, and a figure that stands in stark opposition to everything the TTP represents.

It's not clear that today's attack had anything to do with Malala's Nobel, but what is clear is that the attack is part of a longstanding TTP strategy to target schools.

As Buzzfeed points out, the TTP has attacked more than 1,000 schools in Pakistan since 2009. Schools make for good targets because they represent a variety of things the TTP wants to dismantle. They are state institutions, so a strike against them is a symbolic strike against Pakistan's government. They offer educations that the group considers un-Islamic and promotional of Western values. And girls attending school is banned under a TTP edict.

Malala quickly condemned the latest school attack. “Innocent children in their school have no place in horror such as this," she said. “I condemn these atrocious and cowardly acts and stand united with the government and armed forces of Pakistan whose efforts so far to address this horrific event are commendable."

3) A show of strength and demand for attention

Azam Tariq, a former leader of Tehreek-e-Taliban Pakistan, talks with media in North Waziristan on May 27, 2014 to explains a splinter in the group

The TTP is struggling, according to the Guardian, and it could be trying to use a large-scale, shocking attack to shore up support and prove that it's still a major threat to the Pakistani government.

“The [military] was always wrong about our capabilities,” said TTP spokesperson Korasani. “We are still able to carry out major attacks. This was just the trailer.”

It's not just the Pakistani military offensive, which has killed around 1,600 militants, that's hurt the group — it's internal division.

This summer has been all about the Islamic State, and while the TTP has been trying to create an Islamic state in Pakistan, militants in Iraq and Syria have conquered territory and declared a caliphate. The draw has been strong for some TTP fighters and leaders, and there have been a few high-profile defections.

Add to that the splintery nature of groups in North Waziristan, and you've got a lot of pressure on the TTP. Still, if the TTP breaks apart, there are sure to be plenty of people who'll wreak havoc under different names but similar banners.