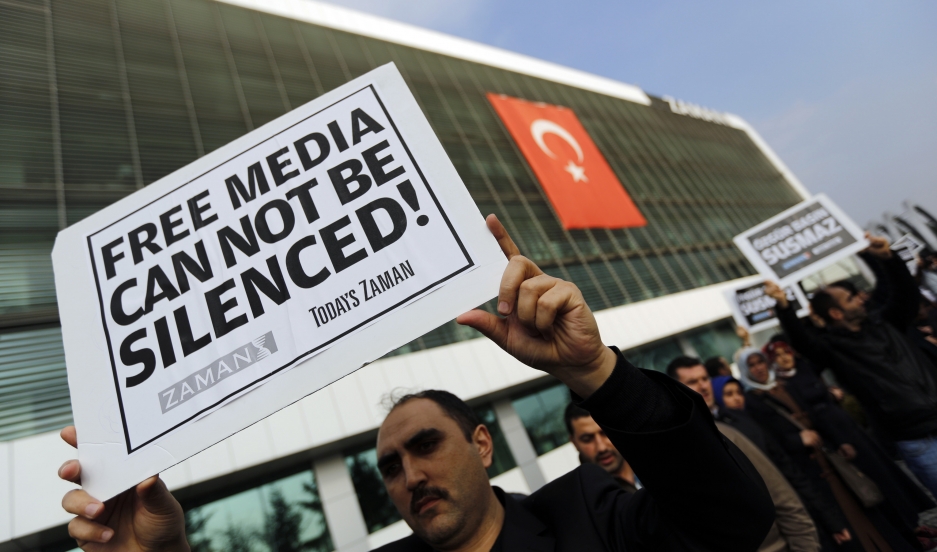 Journalists of Turkey's Zaman daily newspaper in Istanbul protest a police raid of the media outlet. 24 people, including top executives and ex-police officers, were round up in what Turkish president Tayyip Erdogan calls a terrorist network conspiring to topple him.

Close to two dozen employees of Zaman, one of Turkey's largest newspapers, and other media companies around the country were detained on Sunday. The country’s president, Recep Tayyip Erdoğan has defended the raid, saying that the people arrested were part of a “dirty” plot to overthrow the government.

“This has nothing to do with press freedoms,” Erdoğan said at a press conference on Monday. While the European Union criticized the raid, Erdoğan dismissed their objections, telling the organization to “save its wisdom for itself.”

The arrests were made over a massive corruption investigation that broke on December 17, 2013, when dozens of people, including the sons of three cabinet ministers, were detained on charges of mass corruption that included bribery, money laundering, fraud and gold smuggling.

The evidence included phone calls between Erdoğan and his son, in which the then-prime minister seemed to be discussing hiding millions of dollars in cash. The tapes were secretly leaked via Twitter and YouTube, leading to angry denials from Erdoğan and an attempted social media crackdown.

The initial investigation is thought to have been carried out by officials loyal to famous cleric Fethullah Gulen, a rival of Erdoğan's who has been living in self-imposed exile in the US for more than a decade. Gulen’s network of supporters is believed to run some schools, media outlets and police academies where employees and students are loyal to the cleric.

Sunday's arrests took place at media outlets with strong ties to Gulen, including Zaman, and whose reporting has been critical of the government.

Gulen and Erdogan were once strong allies; the pair worked together to help Erdoğan's Justice and Development Party rise to power by mobilizing the cleric's conservative followers. But the two disagreed on many issues, from government involvement in people’s personal lives to Turkey’s strong — and often adversarial — stance in regional conflicts.

The relationship grew increasingly strained until the corruption charges were brought last year and an all-out rivalry ensued.

Those arrested on Sunday are being charged under Turkey’s vague anti-terrorism laws, which were given a boost in early December with the passing of a security bill. The law increased police powers, allowing them to search and detain people with little to no evidence, and without authorization from prosecutors.

No evidence has yet been presented against the dozens taken into custody, and human rights organizations and the United States have joined the EU in its condemnation.