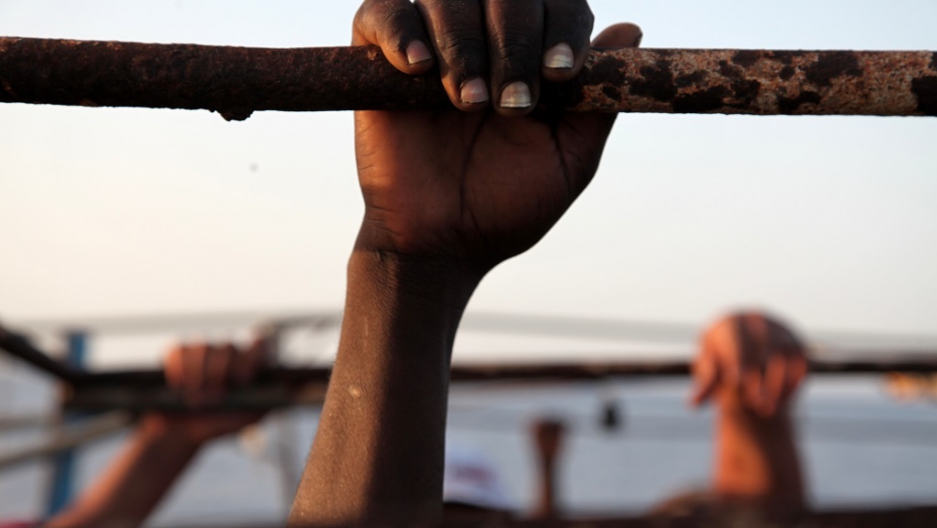 Migrants on a boat headed toward the Sicilian coast, hanging on to a dream.
Credit: Francesco Malavolta/The GroundTruth Project
Share

AUGUSTA, Sicily, Italy — Isma could see that the rubber dinghy he boarded with 100 other refugees was ill-equipped to carry them across the Mediterranean Sea to Sicily from the Libyan capital of Tripoli.

So it was no surprise when, only eight hours into a voyage that can take three days, the inflatable boat began to take on water. A satellite phone left behind by one of the smugglers made it possible to call the Italian coast guard for rescue before it was too late.

Isma, who is in his early 20s, was one of an estimated 207,000 people who surrendered their fate this past year to one of Libya’s once ragtag, now highly organized smuggler rings. By August 2014, the demand for passage from migrants and refugees fleeing war, oppression and poverty in the Middle East and Africa had reached its highest point on record. The UN High Commission for Refugees estimates at least 3,419 migrants have drowned on voyages between Africa and Europe this year alone despite the best efforts of an Italian rescue operation called Mare Nostrum that has rescued as many as 140,000 people since October 2013.

Violence in Isma’s small hometown in Mali compelled him to flee for Tripoli, where he worked odd jobs under miserable conditions — “like a slave,” he said, often mistreated and sometimes robbed.

Libya, where political instability is now veering into anarchy, has allowed smuggler networks to flourish, establishing Tripoli as the primary migration portal to Europe. Gangs charge up to $2,000 for trips in unseaworthy vessels that may or may not reach port. And yet most migrants seeking new lives in Europe have no better option.

Isma scraped together nearly $1,000 to pay the smugglers, along with another $300 for a life vest, a precaution that won’t guarantee survival.

“In some cases these are simply inflatables that would not last long,” said Brigadier Martin Xuereb, the director of Migrant Offshore Aid Station, a private Malta-based group that rescues migrant boats.

As conflicts in Syria, Iraq and Gaza rage on, ample migrant demand for passage is providing smugglers with increasing funds and power. And as long as Libya lacks a stable government, the smuggling trade operates unchecked.

The Syrians, especially, have “changed the game as far as trans-Saharan migration is concerned,” explained Tuesday Reitano, a researcher for the Geneva-based Global Initiative Against Transnational Organized Crime. In the beginning they paid the same as African migrants, but because Syrians tend to have more money, smugglers are starting to charge them more, she said.

No one knows exactly where the vast funds migrant smugglers are accumulating go, but the rapid professionalization of these networks is threatening to entrench itself in the region. “Once these power balances begin to shift, they can actually very quickly accelerate,” Reitano warned. “Once you’ve got a monopoly of force, you have significant amounts of illicit income to buy arms, to buy guns, to buy cars. You can very quickly change the balance of power quite dramatically.”

Migrant testimonies compiled by Italian police and advocacy groups recount the ruthlessness of smuggling lords as gangs jockey to exploit migrant desperation. This past summer, survivors told of smugglers stabbing them mid-journey, throwing people off of overloaded ships to lighten the load, or forcing scores of people into stifling cargo holds full of the boat’s toxic exhaust fumes, where some suffocated during the journey.

After a July tragedy that left 30 migrants dead, migrants testified to Sicilian police that the organizers of the trip had forced African passengers — who pay less for their passage — into the hold to cram more people onboard.

“I heard the passengers who were in the cargo hold ask for help because they were hungry, thirsty and they couldn’t breathe, but the crew didn’t do anything,” an unnamed survivor told police. “Before we left, they told us there would be two bathrooms and a kitchen to eat, but when we arrived on the fishing boat, we saw there wasn’t anything that was promised,” the testimonial continued. “Since we were taken from the beach to the fishing boat on a little rubber boat, we couldn’t go back anymore, even though I was afraid because I could tell it was dangerous. I couldn't say anything because I was afraid — the Libyans were all armed and could kill me.”

Many say it’s necessary to develop more legal avenues to reach Europe, both to help refugees avoid the dangerous journey and to defuse the power of the smuggling gangs. While the United States accepts tens of thousands of refugees who apply from outside its borders, nations in the 28-member European Union bloc have virtually no legal resettlement pathways.

Germany and Sweden have led the way in resettlement and accepting asylum-seekers from Syria in the current crisis, but the rest of the EU has not shared that burden. Amnesty International estimates that, excluding Germany and Sweden, the remaining 26 EU countries have only pledged 5,105 settlement places this year, or a fraction of one percent (0.13 percent) of the number of Syrian refugees estimated to be scattered in the five main host countries. Some EU countries have offered nothing in the way of resettlement plans. And thanks to tightening border controls, European visas are hard to obtain.

“Something must be done about this lack of legal channels,” said Kris Pollett of the European Council on Refugees and Exiles. “There is increasing acknowledgment that we can’t go on just focusing on the sealing of the borders option. People are going to come.”

Earlier this year, the Italian Interior Ministry called the situation in Libya a humanitarian emergency, with upwards of 600,000 migrants from the Middle East and Africa at the time waiting to cross the Mediterranean.

“If we don’t do something,” Pollett said, “We are going to see an increasing number of people dying at our borders. We’re going to see smuggling networks becoming more powerful and richer.” If that happens, Europe may have a bigger problem than overcrowded ports on its hands.

Meanwhile, Isma waits at a reception center in Augusta, Sicily. He’s relieved to be alive, but still hopes to reach England or France, where he can speak the language. But because he has already provided fingerprints to Italian authorities, chances are slim he’ll be able to go there legally.

When asked what he hopes for, he responds simply: “Freedom.”

Kavitha Surana and Maggy Donaldson reported on European migration this summer as part of their two-year M.A. in Global and Joint Program Studies at New York University. Reporting was contributed by Francesco Malavolta from Sicily.