Anything to say? a public art project for freedom
Share

WikiLeaks' Julian Assange has been holed up in the Ecuadorian embassy in London for the past two-and-a-half years. But he may soon be out in public again — in the form of a life-sized statue.

Italian sculptor Davide Dormino is hoping to create a set of statues featuring Assange and two other famous leakers: Edward Snowden, who leaked classified documents from the NSA, and US Army soldier Chelsea Manning, who is serving time in a military prison for the biggest document leak in American history.

"It's a viral sculpture, a public art project that will travel through different countries to inspire people to know the truth," Dormino says. "I represent three icons of our times in which communication is the center our daily life. For me they are three contemporary, revolutionary people."

The bronze statues will depict the three men standing up on chairs, with a fourth, empty chair next to them. "The empty chair is for us," Dormino explains. Anyone who musters the courage "can climb onto it, however uncomfortable and vulnerable, and change their point of view." 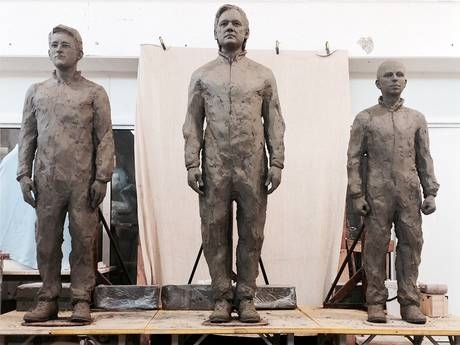 When completed, the three figures will be cast in bronze and standing on chairs to symbolize courage.

Courtesy Anything to say?

Of course, even a public art project about freedom doesn't come free. Vaughan Smith, a friend of Julian Assange, is organizing a fundraising campaign on Kickstarter, a crowdfunding website.

"The reason I supported this work of art is because I think we need to think about who our real friends are," Smith says. "I mean, Snowden, Assange and Manning and other whistleblowers have all believed their actions have been in the public interest, and they've made a sacrifice for this belief. They've lost their liberty."

The Kickstarter page is attempting to raise about $150,000, but the project has only a little over $30,000 in pledges with 16 days to go. Its critics charge that the statues are both too narcissistic and too expensive. Smith says the price tag covers both the bronze casting and the cost of transporting it all around the world.

"We absolutely resolved to do it. I mean, this is small change when you consider the amout of money the government's spending monitoring and snooping on Assange in the Ecuadorian embassy," he argues. "One week of that money would pay for this statue."

And Smith believes that, no matter the cost, it's worth it for the public. "I would say these people are the public's friends, because they've embarrassed people who aren't really our friends: politicans, business leaders, bankers and people like that," he saye. "I think it is important to have a monument that is publicly owned, and I think its absolutely worth the money."