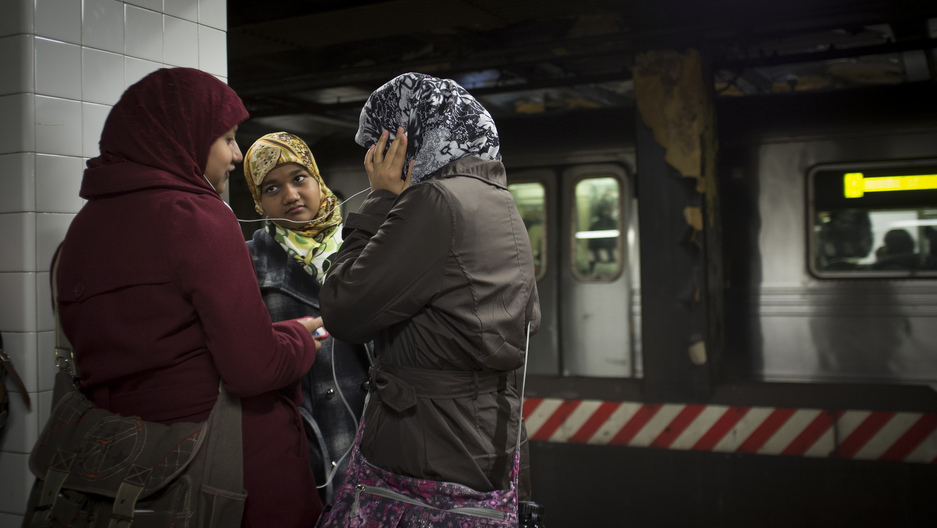 Three women wearing hijab, the headscarf worn by some Muslim women, on a platform in the New York City subway. Australians feared that Muslims on public transportation would be harassed following the Sydney hostage crisis.

Tessa Kum was watching the Sydney hostage crisis unfold on social media when she saw a Facebook post by a woman “that pretty much broke my heart.”

“There was a woman who observed another woman on a train just silently remove her hijab. And when she got off the train she approached that woman on the station and simply said, ‘Put it back on. I’ll walk with you,'" Kum, of Melbourne, Australia, told the BBC. "And the woman who had removed the hijab cried and hugged her. Nobody should have to live like this."

The post inspired Kum to support other fearful Muslims, so she took to Twitter: "If you reg take the #373 bus b/w Coogee/MartinPl, wear religious attire, & don't feel safe alone: I'll ride with you," she tweeted. And then she had an idea that seemingly took over Australian Twitter:

Hundreds of thousands of people followed Kum’s example, tweeting out their transit routes using the hashtag #illridewithyou and offering to shield Muslims from potential abuse.

@sirtessa my bad attempt at a pic to help get the message out #illridewithyou pic.twitter.com/kFld1eNVgv

More than happy to join the #IllRideWithYou initiative. T3 or T4 from Sydenham to city and return, daily.

“It’s a very moving hashtag," says Zeynep Tufecki, a professor at the Center for Information Technology Policy at the University of North Carolina at Chapel Hill. "Australian citizens trying to reassure their fellow Muslim Australians that they don’t blame them for the actions of one person."

Tufecki admits it wasn't the response she expected to see when news of the siege in Sydney first broke.

“On the Muslim feeds I follow, people were really dismayed, they were upset, they were hoping that it would end safely," Tufecki says. "They were also afraid, because after such incidents the whole community tends to get blame."

In fact, when the siege first began, a prominent Muslim refugee rights activist in Australia tweeted her condemnation of the café attack, as well as a prayer that the situation would end in peace. Then the trolling began.

“There was a lot of people saying, ‘How dare you pray for peace. How dare you pray for safety of the hostages,' as if she was responsible," Tufekci says. "It was just really awful and ugly and I thought, ‘Oh no, I’m going to wake up to a Twitter feed of this kind of things.’ Instead I woke up to a Twitter feed of people pushing back against this kind of individual blaming."

Tufecki thinks hashtags have become an important tool on social media for people to change the narrative of the conversation.