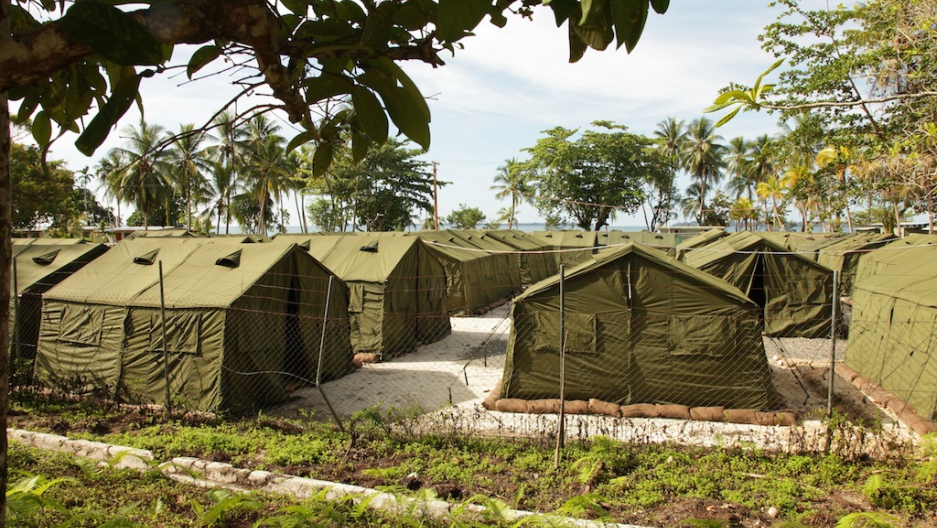 JAKARTA, Indonesia — Based on his government actions, you’d think that asylum seekers are Australian Prime Minister Tony Abbott’s biggest problem. “Stopping the boats” of migrants trying to reach Australia was at the center of his electoral campaign.

Oddly enough, relative to the country's geographic size, Australia has one of the lowest rates of refugee intake in the industrialized world. And since the country signed the Refugees Convention, it is bound by international law to give people fleeing political persecution the right to protection.

But to Abbott, international law doesn’t appear to carry much weight against “national interest.”

Here is a recap of what his government has done to “protect Australia’s borders” in the past year.

Abbott recently bragged about having had “almost no boats [arrive in Australia] over the last 12 months.” What he didn’t brag about is how this was made possible.

The truth is, the Australian Navy forcibly tows or escorts the boats it intercepts back to where they came from. Most of the time, this means Indonesia. It has even invested in “alien looking” vessels to transport refugees out of Australian waters.

Needless to say, the Australian Navy doesn’t check whether the people who risk their lives on rickety boats have legitimate asylum claims when they stop them. It just pushes everyone back.

Not everyone is happy with Abbott’s “success.” The UN said the “stop the boats” policy may breach international law. And in early December, Australian Navy personnel talked on television about the trauma of pulling dead asylum-seekers from the sea.

2) It released this not-very-subtle poster.

The Australian authorities want asylum seekers to know that, even if they manage to slip through the Navy net and make it to Australia, there is NO WAY they’ll actually resettle there.

So they made a poster. The poster is available in 17 languages on the Australian government website. At the bottom of the page is a banner that says “Thinking of home?” and links to info on voluntary return services for those who’ve already made it ashore.

They also made a video, in which commander of Operation Sovereign Borders General Angus Campbell, wearing his army uniform, calmly explains: “The message is simple. If you come to Australia illegally by boat, there is no way you’ll ever make Australia home.”

To be fair, this wasn’t Tony Abbott’s idea. Offshore processing centers were implemented before he took office.

For the past two years, Australia has systematically sent migrants arriving by boat to detention centers in Papua New Guinea and Nauru (a tiny Pacific island), where their refugee status is determined.

Amnesty International visited one of these detention centers, on Papua New Guinea’s Manus Island, and called the treatment of asylum seekers “cruel [and] humiliating.” It also said it was a “deliberate attempt to pressure them to return to their country of origin, regardless of whether or not they are genuine refugees.”

One migrant was reportedly beaten to death during riots there in February. In Nauru, there have been claims of women and children being sexually assaulted. In Christmas Island’s detention center, the Australian Human Rights Commission said new mothers are on suicide watch, and expressed “grave concern” as the place is “totally unsuitable” for infants and young children.

In late November, a dozen migrants sent letters to the US and Canada saying they’re being detained “in the Australian version of Guantánamo,” and begged for asylum.

4) It has resettled refugees in conditions that resemble “liv[ing] like animals in the jungle.”

Australia’s Fairfax Media went to meet some 50 refugees, mainly from Pakistan, who have been resettled in Nauru, an impoverished country that human rights groups have said is absolutely not suitable for resettlement. The refugees say they don’t have enough clean water, food, or work to survive, and that they have been “abandoned to live like animals in the jungle.”

"In our country, the Taliban will come and they will slash our throats and finish our lives. It will take 10 minutes to die. But here, they are killing us by pain, taking our soul and our life slowly,” one refugee told Fairfax Media.

5) Australia sends asylum seekers back to countries where they face grave danger.

In March and August, The Guardian revealed the “‘unthinkable’ lengths to which Australia had gone to return Syrian detainees,” despite the fact that one of them at least had said he’d face “certain death” if returned.

This, The Guardian says, included sharing asylum-seeker identity documents with the Syrian consulate in Australia, booking flights, and “endeavoring to issue an ‘ultimatum’ to force them into a decision on repatriation, despite a number of them being severely mentally ill.”

In September, Immigration Minister Scott Morrison said that 412 asylum seekers had been sent back home, including one Syrian, six Iraqis and 48 Iranians. Earlier this year, the government had increased monetary incentives to up to 10,000 Australian dollars (US$8,400) for asylum seekers to voluntarily return home.

6) It signed a resettlement deal with Cambodia.

That’s right, Cambodia. One of the poorest and most corrupt countries in the world. Amnesty International called it a “new low in Australia’s deplorable and inhumane treatment of asylum seekers.”

Cambodia agreed in September to take in asylum seekers who have obtained refugee status in Australia. In exchange, Australia will give Cambodia 40 million Australian dollars over four years, to help with resettlement and development projects. “It’s just being used to buy off Cambodia,” said Ou Virak, the head of the Cambodian center for Human Rights.

Human Rights Watch said that “sending people to a country that has a terrible record for protecting refugees and is mired in serious human rights abuses” definitely does not meet “Australia’s commitment to send refugees to a ‘safe third country’.”

7) It will automatically reject all UNHCR refugees registered in Indonesia.

All asylum seekers who have registered in UNHCR’s Jakarta office since July 2014 will simply not be eligible for resettlement in Australia. Morrison, the immigration minister, has called it “taking the sugar off the table.”

“We’re trying to stop people thinking they can go to Indonesia and wait around till they get to Australia,” Morrison told Australia’s ABC radio late November.

“Ironically,” Australia had traditionally justified its anti-boats policy by arguing boat migrants were “queue jumpers,” contrary to those who “followed the rules” and registered with UNHCR around the world to obtain resettlement.

It’s a “win for Australia” said Tony Abbott. Early December, the country passed a bill reintroducing temporary visas for refugees. They will be allowed to live and work in Australia for three to five years, but won’t be granted permanent protection. If the Australian authorities decide the conditions have improved in their country of origin, they’ll send them back.  The new bill also redefines who’s a refugee and restricts legal appeal to the decision, which critics say makes it easier to send asylum seekers back to places where their lives could be at risk.

A year after he launched “Operation Sovereign Borders,” this latest measure seemingly gave Abbott a sense of achievement.

“We always said that three things were necessary to stop the boats - offshore processing, turning boats around and temporary protection visas, and last night the final piece of policy was put in place,” he said the day after the bill was approved.