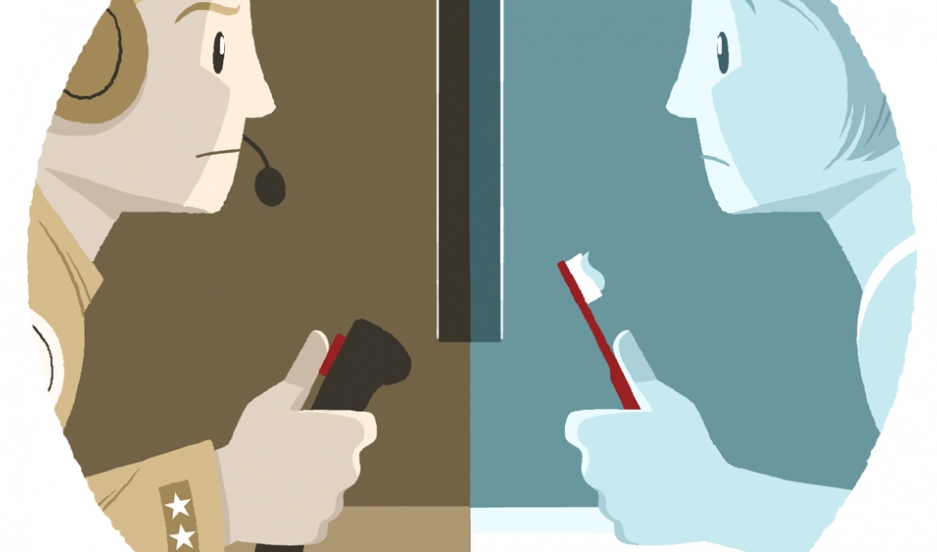 It's an odd quirk of modern warfare than when a bomb falls in Yemen or Iraq, the person who dropped it might be able finish her mission and be back home for dinner — in Nevada.

But that is reality for operators of the American drones that spy on, and sometimes kill, potential terrorists all over the world.

"Taylor" is one of those long-distance soldiers. She doesn't want us to use her real name, knowing that some people aren’t happy about what she does for a living. She fears they’ll target her for protests.

Despite being just 30, Taylor has already been involved in the drone war for a decade. She grew up on a little farm in northern California, and was looking for a way out of town after she graduated from high school.

“I always wanted to be an FBI profiler,” Taylor says. “So I joined the Air Force, into the intelligence portion.”

That was in 2003, around the start of the war in Iraq. She was assigned to what was then a small Air Force program, comprised of about 50 young men and women, who learned to analyze images gathered by Predator drones — and act on them.

“I had no idea what I was getting into," Taylor says. "There was no press about them, really. There was just what you heard word-of-mouth through the community.”

A military drone — the Air Force refers to them as Remotely Piloted Aircraft — actually has two operators: a pilot who flies the thing by remote control, and a sensor operator who manipulates the cameras and fires the missiles.

Taylor trained as a sensor operator for six months. Then, just like that, she was running missions.

“It was intense," she says. "You’re these 19-year-old kids who have never had any experience in war or anything like that, and you’re getting trained how to blow things up and be responsible for million dollar equipment, flying over countries you’ve never even heard of. So I like to think I was pretty much scared out of my mind going through.”

I ask her if her instructors taught her how to shoulder that responsibility. She says she thinks they overdid it: “It was a little overwhelming, worrying that you’re going to mess something up. Messing something up could be blowing up the wrong house.”

Of course, she wasn’t responsible for deciding who to blow up. Higher-ups were watching, and they gave the orders on who to follow and when to pull the trigger. Still, the stress was immense.

“You would have people saying, ‘All right, the President is watching what you’re doing right now, so don’t mess up," she remembers.

A typical work day might be snooping on insurgents in Nigeria, or bombing terrorists in Afghanistan.

But then her shift would end, and she would walk out of the control station into the Nevada air, ready to go home or buy groceries or — as Taylor puts it — “turn the beer light on."

The light went on a lot.

Taylor left the Air Force in 2009 and then got a job training other sensor operators.

I wanted to know how Taylor’s perception of war and security compare with the older generation, the fighter pilots who actually flew planes and dropped bombs from the sky. So I called up an older acquaintenance from the industry, Keven Gambold.

Gambold was a Top Gun kind of pilot. He flew missions over Kosovo and Iraq multiple times for both England and the United States. He eventually transitioned to drones, and he now owns a commercial drone consulting firm called Unmanned Experts.

Gambold says in the "old days," most of a fighter pilot’s life was training. “The fighter guys only go to work, real work, when there’s a war on," he says. "They only go for a couple of months, and then they come back.”

“It’s a massive, massive turnabout,” Gambold says. “That’s a lot of pressure. You put people on the front lines for three years, working a shift system that is barking mad, and go, ‘Yeah, that’ll be fine. They won’t have an alcohol problem.’ I think it’s pretty intense.”

It’s not like the military doesn’t know this: Drone operators are tested for PSTD and other mental health issues.

But Taylor is still worried about the next generation of operators, the 19-year-old recruits she helped to train. They're natives from the world of first-person gaming, and she fears they’re more desensitized to the gravity, the life-and-death nature of this work.

Of course, the drone program has plenty of opponents. Critics protest that drones are killing innocent civilians from Pakistan to Yemen.

“Now we have this label as baby killers or something, and it’s not fair,” Taylor says. “I wish that people could understand the benefits of not having to send guys on the ground and putting them in harm’s way.”

I ask Taylor if she thinks she’s killed innocent people. She takes a long, deep sigh, stammers out some military-speak about trusting the chain of command, but then she gets to her real point.

“You’re told these are bad guys, really bad guys. 'These guys are planning the next 9/11.' So you want to think that you just saved thousands of people as opposed to ‘I just killed five people,'" she says. "But I’ll never know for sure.”

In the basement of her suburban house, toys and a racetrack are strewn about the carpet. Taylor is proud of her service to America, proud that she's part of the generation that repsonded to 9/11. But when she had her son, who plays with these toys on the floor, things changed.

“I think it brought a sense of humanity to what I had done,” Taylor says. “Maybe all that hate just melted away, and you’re left with this feeling left over. It’s kind of a sadness. You’re sad that these things have to happen.”

She recently took a leave of absence from work because of health issues, some of which she attributes to a decade of living in a perpetual state of long-distance war. She’s not sure what’s next — maybe school, maybe playing the field for government jobs.

She chuckles wryly and admits: “I don’t know what I want to do when I grow up.”