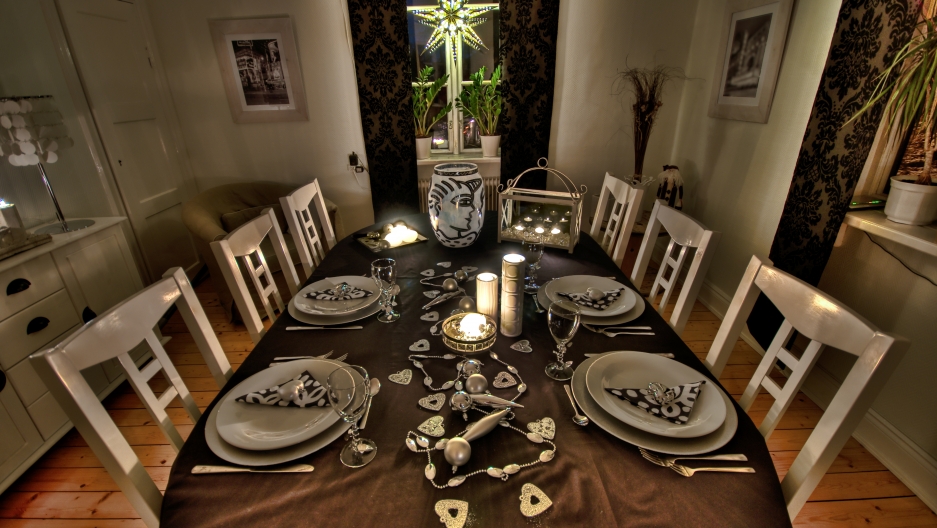 Slow down when you're eating. Your body will thank you.

A new study on mice shows that how much you eat may not be as important as when you eat it.

Researchers found that mice were less likely to develop obesity, diabetes or other negative consequences of overeating when the time between feedings was fixed between 8 and 12 hours. The results are published in the journal Cell Metabolism.

In the study, two groups of mice were fed a high-fat diet. One group was allowed to eat whenever they wanted; the second group had a restricted feeding schedule and was allowed to eat only after a certain number of hours had passed.

“When you feed mice a high fat diet, they like to eat that food all the time. They eat it during the nighttime and during the daytime. Instead of getting a good day's sleep, they tend to eat the food,” says Amir Zarrinpar, one of the paper's authors and an assistant professor of gastroenterology at the University of California, San Diego.

Zarrinpar and his colleagues found that when they restricted feeding to just the nighttime, those mice “ate the same amount of food as the other group, but they didn't become fat, they didn't get diabetes, and they didn't have any of the negative consequences of eating a high fat diet.”

“We tried it at eight hours; we tried it at nine and twelve hours, as well,” Zarrinpar says. “It didn't work so well at the 15-hour time point, but it did work at the 12-hour.”

Zarrinpar says his colleague, Amandine Chaix, “did exhaustive studies on the mice” to try to pinpoint what was going on. “What we noticed,” he says, “was that the longer animals fasted, the less likely it was that the energy they consumed would turn into fat.”

You can imagine, he says, that if the body is expecting a period of fasting between feedings, it would store energy in a way that is more readily available, and fat isn't the best way to store that kind of energy. “Fat is our body's way of putting energy into long-term storage,” he explains.

There may be a genetic component, as well, Zarrinpar says. Other studies have shown that “the genes that control metabolism are highly circadian,” he says. When we eat at sub-optimal times, the body may not be expressing the right genes at that time and “may decide to shuttle that food energy toward building up fat cells, as opposed to glycogen or some other forms of energy that may be more readily available.”

Time-restricted feeding also makes some interesting changes to the gut microbiome, Zarrinpar says. "We showed that when mice consume a high-fat diet, they lose a lot of the dynamic changes that happen normally in the gut microbiome. ... When we put them on a time-restricted feeding, we restored some of the dynamic changes in a select number of [bacterial] species. ... And it just so happens that those species we identified have been hypothesized in previous studies to play an important role in metabolism."

Zarrinpar says they structured these studies in anticipation of applying them to humans. People have different eating habits during the work week, when we have set schedules and tend to be less social, than we do on the weekends. So they duplicated this pattern in the mice.

“We restricted their diet for five days out of the week, and on the weekends we gave them a break and let them eat however much they wanted,” Zarrinpar says. “What we found was that they were still protected against obesity under those conditions.”

Since some research suggests obesity and related problems stem from a high-carb diet, rather than a high-fat diet, the researchers tried that, too. The diet in the previous study had been 60 percent fat. This time, the diet was only about 30 percent fat and contained high levels of sucrose — a carbohydrate that occurs naturally in all fruits and vegetables. The time-restricted feeding protected against the negative consequences of that diet, Zarrinpar says.

This study does not give them enough information to change practice guidelines or to make recommendations to people, Zarrinpar says. But he has “anecdotally heard of a lot of people who have adopted the diet,” and report good outcomes.

“But, of course, you have to keep in mind that the people [for whom] it didn't work are probably not calling us and telling us that it didn't work,” he notes.