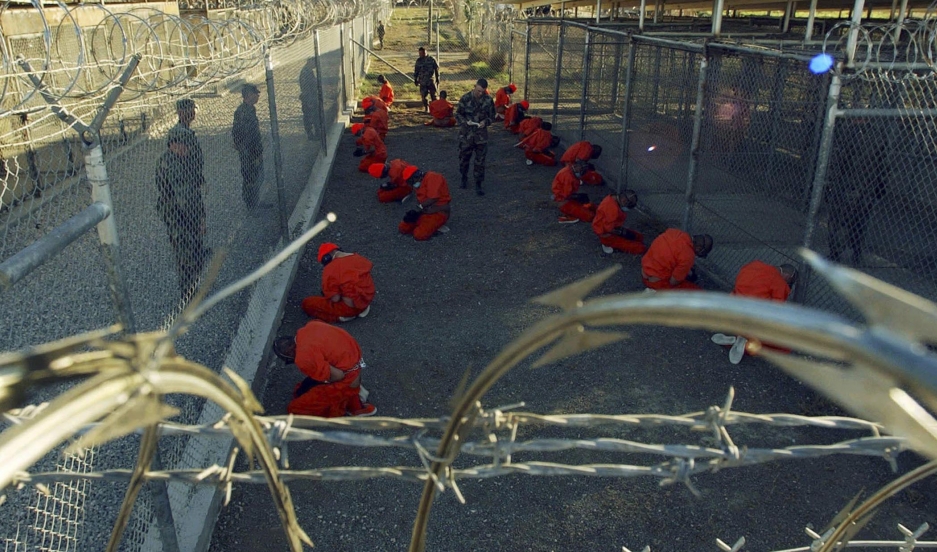 Detainees in orange jumpsuits sit in a holding area under the watchful eyes of military police during in-processing to the temporary detention facility at Naval Base Guantanamo Bay in January 2002.

Since the release of the CIA's torture report, there has been a heated national conversation about the use of torture during interrogations. There's no doubt it's a divisive issue.

But what do those who have served the US have to say about torture tactics? The World regularly consults a community of veterans, and we reached out to them, asking how they felt about the use of torture.

The majority of responses that came in claimed that torture is often a neccessary tool of war — within reason. They have been lightly edited for clarity and style.

"While I do not condone torture as a first method of getting people to respond to interrogations, I do believe in escalating methods of interrogation when dealing with ruthless, heartless, wicked people who are clearly enemies of the United States. Detainees may or may not have direct connections to the upper echelon. However the act of defiance by refusing to respond places them in a negative light. They have no regard for following the rules of the Geneva Convention s— rather, their leaders violate the conventions in every way. The continued beheading of US and European citizens is but one example. I do believe in and practice non-violence. But I definitely believe that torture is acceptable in defined circumstances and situations. Details of the techniques should be limited to only very high level of security clearance personnel. Finally, we do accept the use of the death penalty in horrific crimes against persons in this country. Torture is certainly not as severe a consequence as that!"

"I will advocate for the total removal of torture when nuclear weapons are also abolished. They are both morally wrong, but also efficient, for the same reasons."

"I don't understand how a country/Congress that asks its soldiers to kill in the name of national security can be so upset over people being tortured for the same ends. Is death really so much more agreeable than torture? And guess what — there is absolutely zero chance of gaining intelligence from someone who we've killed. In a perfect world, none of this would be an issue, but in the world we live in where extremists are actively trying to kill innocent, peaceful civilians, we are forced to take measures in the interest of preventing those atrocities that most people can never truly understand. We are not fighting a linear battle and we are engaged with an enemy who does not play by the traditional "rules" of warfare. If we do not take extreme measures to thwart their efforts we will suffer. To Senator Feinstein, her committee, and those who are appalled by their interpretation of the findings, I would ask for their solution rather than simply their criticism, and am curious if they are truly willing to live with the consequences that will result from their approach."

"The toolbox should be large and nearly limitless. And unquestioned by politicians that lack the experience of being on the ground."

But some other vets, a minority of the responses we got, to be sure, felt differently, siding with members of Congress who say torture is ineffective — or arguing that by using torture, the US is in violation of the Geneva Conventions.

"If we're saying the ends justify the means then we've just endorsed terrorism. We are a nation of laws — if we ourselves don't abide by our laws then who are we to hold others accountable to that standard?"

"In adopting torture we undermined our humanitarian goals in Iraq and Afghanistan. We destroyed the moral high ground we used to decry human rights abuses in China, Russia, Saudi Arabia and Yemen. We allowed ourselves and our leaders to justify and carry out crimes against humanity. The worst par, is that as former President George W. Bush and former Vice President Dick Cheney deny that anything inappropriate was done, a similar report in South America said that crimes against humanity are not covered by immunity."

"We now know that after this brutal regimen of torture, detainees often gave false information. if we do these horrific things to foreign nationals, their governments will gladly do the same to our men and women."

If you're a veteran and would like to join our SMS community, text RETURN to 69866.