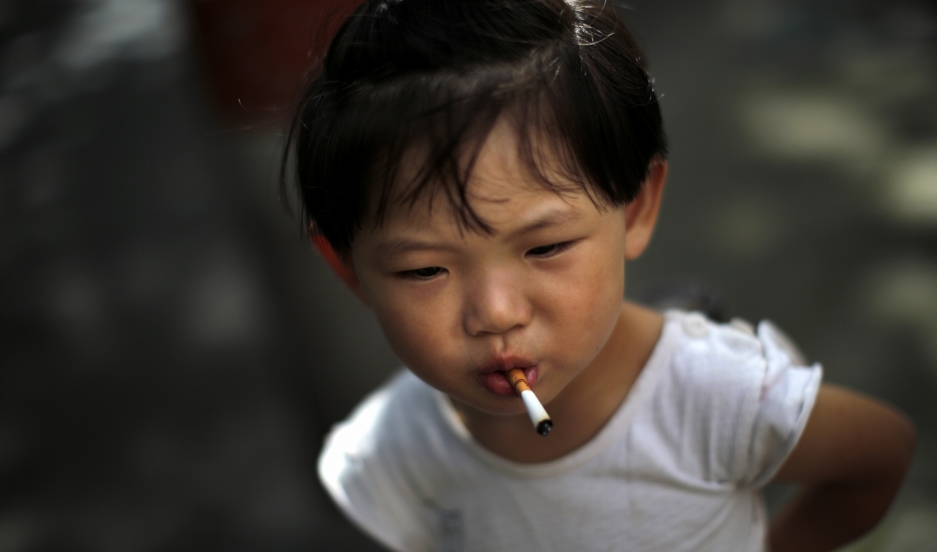 A girl stands on a sidewalk after putting an unlit cigarette in her mouth, which she picked up from the ground, in Shanghai July 31, 2014.

The revenue generated by China National — $170 billion in 2012 — was more than the revenue brought in by Apple that year.

“[CNTC] was started by the government in 1982 as a way to corral black market cigarettes,” Martin says. “It’s just exploded in growth along with the Chinese economy. Currently, the tobacco industry in China accounts for seven percent of all of the government’s revenue.”

In addition to generating income for the government, the Chinese tobacco industry employs about half a million people directly, and an additional 20 million people work at retail stores selling cigarettes.

Though the tobacco industry’s work force spans the gamut, Martin says that there is a gender gap when it comes to tobacco use in China.

“It’s exclusively men,” he says. “More than half the men in China smoke, but only two percent of the women smoke, and that’s been fairly consistent. It’s also cultural — men exchange [cigarettes] as gifts.”

Meanwhile, lung cancer is on the rise in China. This year alone, smoking-related diseases are expected to kill more than one  million people in the country.

“Unless the Chinese government is able to get a handle on this and reduce the prevalence of smoking, the authorities estimate that there will be three million smoking-related deaths by 2050,” Martin says.

Fighting those numbers will likely be difficult, because CNTC starts marketing tobacco products early on — even to elementary school students.

“The subsidiaries of the national tobacco company sponsor elementary schools,” Martin says. “They give them money, and some of them are named after local tobacco companies. ... They’re very much ingrained in the local culture.”

Though China is still decades behind the US when it comes to anti-smoking efforts, Martin says Chinese officials are taking steps to change the culture.

“In the last year there has been some movement from the Chinese government, at least in terms of rhetoric,” he says. “There has been some pretty strong legislation that’s been introduced, and Beijing recently became a smoke-free city. That has created some optimism among anti-smoking advocates — they may finally be able to address this issue.”