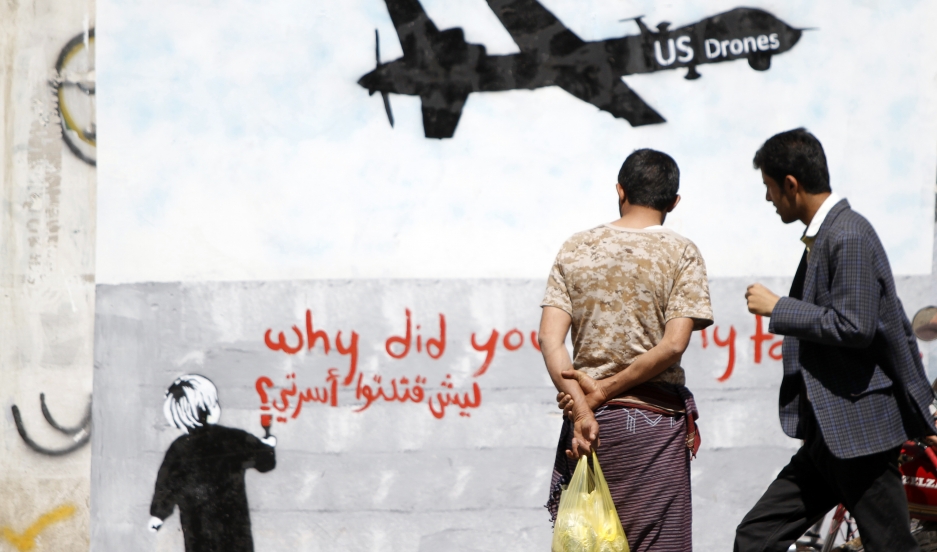 Men look at wall graffiti depicting a American drone along a street in Sana'a, Yemen, on November 9, 2013.

American policymakers credit drones as a lifesaver for American soldiers, saying it keeps them from direct confrontations with fighters from groups like al-Qaeda in the Arabian Peninsula in Yemen. But on the ground, the hum of a drone flying overhead sparks fear in Yemenis.

"Damaging their relationship with the sky" is how Yemeni activist Farea al-Muslimi puts it. He now lives in Sana'a, Yemen's capital, but comes from a rural village where he says drones terrorize residents.

"Their income, or their food on the table, comes from the sky, from the rain," says the 24-year-old Muslimi. "The sky was the source of hope. Now it's the source of bombs."

Muslimi is an outspoken critic of American drone strikes in Yemen. Days after a drone fired a missile at a target near his village in April 2013, he travelled to Washington to testify before the Senate Judiciary Subcommittee on the Constitution, Civil Rights and Human Rights.

"What the violent militants have previously failed to achieve, one drone strike accomplished in an instant," he said, warning that the drone campaign was turning Yemenis away from the United States. "It has distracted attention from AQAP ... to make the United States actually the enemy."

Muslimi points out that "the target person was a person everyone knew, and could easily have been arrested by Yemeni authorities. But most importantly, all of those who were with him were actually innocent civilians that had no idea of his connection to AQAP."

"The problem with drone strike is that [the CIA and the US military] are confident that they are doing the right thing, and in fact they are not, on the ground, at all," Muslimi says.

While the Obama administration has pledged to try to minimize deaths of non-combatants, bystanders are still dying in the strikes. The Bureau of Investigative Journalists reports there have been 13 to 15 confirmed drone strikes in Yemen so far this year, killing about 100 people, including civilians.

And it's not just the United States whose image is suffering. The Yemeni military forces work in concert with Americans to combat AQAP, and that cooperation "is damaging people's relationship with the central overnment, with the central security forces," Muslimi says. "They simply accuse it of being the puppet of America in Yemen."

In Muslimi's view, the drone campaign is tearing at every important bond that locals have: "It destroys the local society's relationship with each other, with the sky and with the security forces in the center."