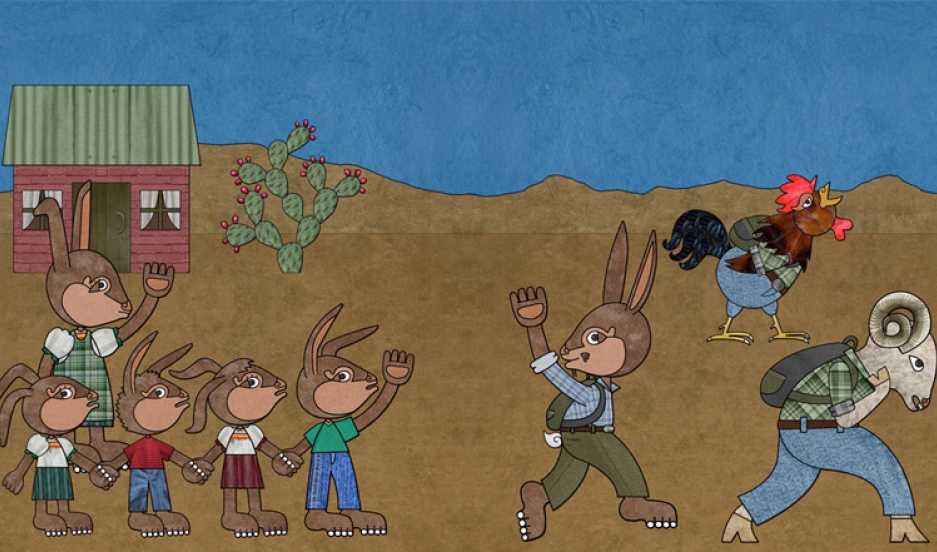 A scene from "Pancho Rabbit and the Coyote: A Migrant's Tale." The children's book, by Duncan Tonatiuh, is popular for its recognition of including immigrant perspectives.

In the 10 years Caroline Sweet has been teaching bilingual fourth grade in Austin, Texas, she’s had one white student.

“We can’t really ignore talking about immigration here,” she said. Her school, Metz Elementary, is about 95 percent Latino.

For the first time this year, minority children in US public schools outnumber white students.

Are school bookshelves reflecting this change? No, say members of one grassroots group, We Need Diverse Books. Last summer, the group launched a social media campaign on the lack of diversity in children's literature. Since, the organization has enlisted authors, librarians and self-proclaimed "book nerds" to promote diverse books. They provide recommendations to parents and young readers, and organize panels and events addressing diversity in kids lit.

"There's definitely a gap in stories about the immigrant experience,” says Ilene Wong, a surgeon, young adult author and vice president of development at We Need Diverse Books.

Wong points to one major hurdle when it comes to promoting more diverse books: "It boils down to the publishers,” she says. “We’re simply talking about keeping up with the demographics of the US, but some publishers will say, ‘We don’t want to carry this book because it doesn’t appeal to our demographic.’ There’s just this blatant lack of awareness and it’s just a matter of having the readership recognized.”

“You have kids putting a book down because they think, 'Oh, no one in that book looks like me.’"

Getting diverse books into schools

In early October, the Consortium of Latin American Studies Programs  hosted a workshop in Washington, DC, to help educators address immigration issues in the K-12 classroom. The workshop featured Duncan Tonatiuh’s children’s book “Pancho Rabbit and the Coyote: a Migrant's Tale.” His book, which he illustrated himself, won the Pura Belpré Award, named after the first Latina librarian at the New York Public Library.

The book’s main character is Pancho, a young rabbit whose father had to travel north for work. When he doesn't return, Pancho tries to find him and runs into Coyote, who offers to bring him north. Their travels lead them through familiar border stories -- traveling on a dangerous train, crawling through dark tunnels and crossing a deadly river.

This year, Tonatiuh traveled through the US reading his book to students and parents.

"Kindergartners get scared when Pancho encounters the coyote," says Tonatiuh. "They see the story as more of a cautionary fable. Older kids talk a lot more about the facts and stats." He also relates to the book himself. He was born in Mexico City, but went to high school and college in the US. He says living on both sides of the border helped inspire his books.

Fourth-grade teacher Caroline Sweet uses Tonatiuh’s book in her class, saying it creates a safe space for students to talk about immigration.  "My students surprise me every year with what they say and how open they are with their own stories," she says. "In the classroom we ask each other, 'Are we finding other rabbits or do we know any coyotes?'”

She says that, at times, students can be cautious to reveal too many details about their own US journey. She has students write down their stories and promises anonymity. "Even kids who might not have a border-crossing story understand the sacrifice other children sometimes make,” says Sweet, who keeps her own online catalog of books that address diverse cultures and immigrant communities.

"Children's books are mirrors and windows,” she says.  "Kids see themselves and the world around them in these books."

As for Tonatiuh, he says that he just tries to make the best books he can. "I want them to not only appeal to Latinos, but all kids."

Here is a selection of children's books recommended by teacher Caroline Sweet. We've also included a few recommendations from the staff of We Need Diverse Books:

What other children's books focus on immigrant communities? Share your suggestions below.