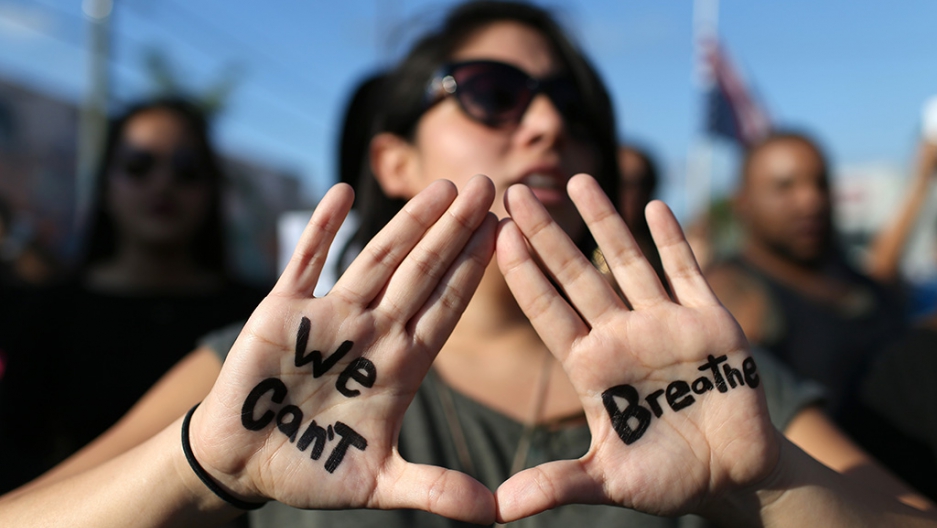 Demonstrators march to protest police abuse on December 7, 2014 in Miami, Florida. The protest was one of many that have take place nationwide after grand juries investigating the deaths of Michal Brown in Ferguson, Missouri and Eric Garner in New York failed to indict the police officers involved in both incidents.
Credit: Joe Raedle
Share

EVANSTON, Illinois — The decision not to indict Ferguson police officer Darren Wilson came several days after Russian President Vladimir Putin walked out of the G20 summit in Australia to show his irritation with Western leaders regarding Russian aggression towards Ukraine, and the downing of flight MH17 over Eastern Ukraine.

Coming off of yet another prickly confrontation between Russia and the West, Putin could use the Ferguson grand jury decision against the US, if he were to repeat the Soviets’ tactic of gloating over US racial strife during the Cold War.

In the 1960s, a race riot in the US became a media field day for the Soviets. Headlines like “Racism is the Ulcer of Capitalism,” and “Shame to Racism in the US” were common.

The Soviet government funneled these state publications and their proclamations about US hypocrisy into the hands of nations recently decolonized.

The leaders of these nations were hardly mindless dupes. Kwame Nkrumah of Ghana, Jomo Kenyatta of Kenya, and Agostinho Neto of Angola knew what the Soviets were up to. They also knew from experience that when their diplomats traveled to Washington, they were forced to stay in segregated hotels.

Nonetheless, it was this kind of Soviet opportunism that made the US government think hard about the global implications of domestic racial intolerance. It was an international badge of shame for the nation to declare itself the leader of the free world while television screens and newspapers depicted white policemen aiming fire hoses at peaceful black protesters.

As part of a strategy to shift global influence away from the West, the Soviets pressured the US to keep its outrageous actions of racial intolerance under scrutiny, forcing the US to be ashamed of the treatment of its black citizens.

Some of our most revered black cultural figures — Paul Robeson, W.E.B. Du Bois, Lorraine Hansberry — were associated with the Left. They used their Soviet connections to engage in conversations about white supremacy, and to compel such conversations to be soul searching.

The recent 25th anniversary of the fall of the Berlin Wall reminded us that Soviet communism is dead. But has post-communism become an excuse for us to become more racist?

Our allies have reported on Ferguson in ways that should give us pause. In Germany, Zeit Online reports, “the situation of African-Americans has barely improved since Martin Luther King.”

El Mundo, a right-wing Spanish newspaper, writes that Obama's “words of peace and reconciliation are perceived by many activists as inadequate and almost treason to a situation they see as a direct result of slavery and racial segregation laws that were in force until 1965.”

Le Monde has noted the injustice in Ferguson in its newspapers, and Turkish media have compared Ferguson to the Gezi Park protests last year.

Predictably, Russian news outlets have covered Ferguson closely. Svobodnaya Pressa has described Ferguson as “AfroMaidan,” saying that Americans have “prejudice towards African-Americans … in their blood.”

With news daily from Ferguson, a question emerges: will we pay attention to how the world views us?