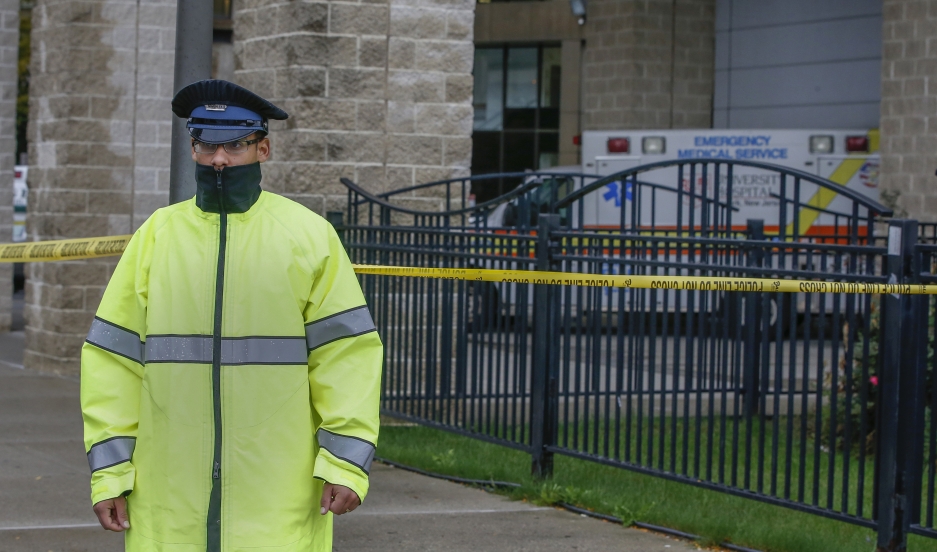 A hospital security guard stands next to police tape near an ambulance at University Hospital in Newark, New Jersey, October 22, 2014

About one million Americans work as private security guards, twice the number of those serving as police officers.

While the data does not state the number of guards who are armed, Shoshana Walter, public safety reporter at the Center for Investigative Reporting (CIR), says the expected norms of policing simply don't apply to the security guard industry.

“The security industry is very different from the law enforcement profession,” says Walters. “They have limited powers, they don’t have the same ability to detain or arrest, or as it relates to search and seizures. But they’re often taking on the same types of roles as law enforcement officers.”

But Walters says guards often have a small fraction of the training that police officers usually get. In the state of California, for example, a police officer is required to get a minimum of 600 hours of training — an armed security guard gets about 54 hours.

“The difference there is huge,” she says.

In addition to training, regulations regarding background checks for armed guards also vary widely by state.

"We found that 27 states are not checking armed guard applicants through the prohibited possessor database — that's a database of people who are prohibited by federal law from possessing guns," Walter says.

According to Walters’ research, many security guards are explicitly prohibited from owning a weapon for personal use, for several reasons: Some have mental health issues in their past, others may have restraining orders against them, may have been dishonorably discharged from the military or have misdemeanor domestic violence convictions.

“These are people who are prohibited, by law, from carrying guns,” she says. “They can’t buy guns and they can’t possess guns, and they’re getting jobs as armed guards.”

Walters says the security guard profession is also used as a “backup” for law enforcement officers who were fired because of misconduct or using excessive force, or for civil rights abuses.

“There’s only one state that actually checks for that — the state of Oregon,” she says. “But the state has actually never rejected an armed guard applicant who previously was a law enforcement officer.”

Though many studies show the presence of a security guard can lead to a decrease in crime, CIR did an analysis of the FBI’s bank robbery database, which includes information about every bank robbery in the US, and came to a different conclusion.

“What we found was that when an armed guard is present during a bank robbery, the chance of violence happening triples,” Walters says. “One of the problems with the way the armed guard industry is regulated is that, for the most part, there’s no one monitoring when a security guard shoots his or her gun.”

Walters says a lack of oversight has led to situations where security personnel who have acted recklessly with a firearm are still able to keep their armed guard licenses.

“People who work in the security industry, even some security executives, want to see more uniform standards across the states,” she says. “There are some states that do some things really well. Florida, for example, while they don’t require mental health evaluations for armed guard applicants, they do require that guards or their employers file reports whenever they use their guns.”

Only 12 states that require those reports to be filed. In most states, though, Walters says no entity tracks, monitors or investigates armed security guard shootings.

“Even among those 12 states, there’s massive underreporting,” she says. “Regulators receive the reports and rarely do anything with them. There’s a huge lack of oversight.”

“An armed guard, who was later diagnosed with severe mental health problems — psychotic disorders, delusional disorders — was working at a strip club and spotted these two men sitting in a car,” says Walters. “He said they looked menacing and that they were rolling a joint. As he was walking toward them, he said they both got out of the car simultaneously.”

“He interpreted that as a threat, and he shot both of them. One of them is now paralyzed from the waist down and the other was killed,” Walters says.