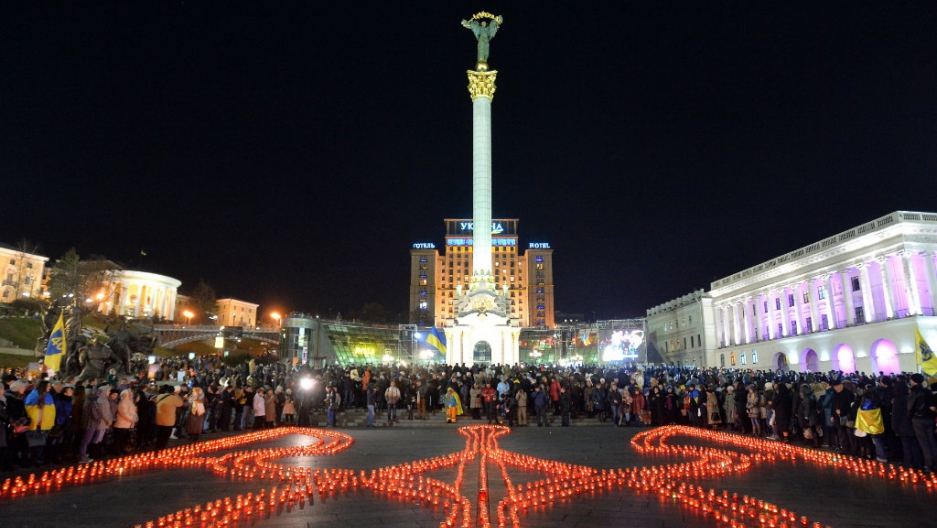 Candles form the shape of Ukraine's national coat of arms as thousands gathered in Kiev's Independence Square on Nov. 21, 2014 to mark the first anniversary of protests which unleashed a year of turmoil. A crowd of several thousand gathered in Kiev's Independence Square, known as Maidan, to remember the more than 100 protestors who died in demonstrations that started on Nov. 21 last year.
Credit: GENYA SAVILOV
Share

Editor’s note: This analysis is part of a Special Report called “The Eleventh Hour: Unlearned lessons of World War I” which launched this year, a century after the conflict began.

KYIV, Ukraine — On a sunny afternoon this fall, cafés in this vibrant capital city were packed and couples strolled the streets under a warm sun. Visitors could have been forgiven for failing to realize the country was at war.

I was with the cousin of an old friend who had urged me to meet her for a take on what “ordinary” Ukrainians believe about their country’s conflict. Not that Olga Kuzakova really qualified as ordinary: The smiling yoga instructor’s travels had taken her as far away as China and the United States. We chatted amicably until I mentioned the veneer of normality. Ukrainians may appear as if matters were more or less typical, she replied urgently, as if I’d blamed her for not caring about the conflict. But under the surface, she added, they’re suffering for their country, struggling to cope with the psychological strain of not knowing what the future will bring.

It was more evidence that the Kremlin’s support for separatists in Ukraine’s largely Russian-speaking east is achieving its aim of destabilizing life for all Ukrainians. It’s also doing something else remarkable: encouraging them to forge their own national identity around their shared troubles. The new collective consciousness started to form on the Maidan, Kyiv’s central square, the focus of protests that forced former President Viktor Yanukovych to flee in February. Before then, says political analyst Volodymyr Fesenko, Ukrainians’ post-Soviet identity was an eclectic mix of loyalties — to Russia, to the West and to the Soviet past.

“The Maidan was the start of the national birth,” he told me. “It’s prompted a sharp process of national consolidation.”

Now the embattled government in Kyiv is confronting the rebels while attempting to stave off financial crisis. One of its largest long-term tasks, however, will be ensuring that national identity includes all members of a society divided along lines not only of geography, but also culture, history, language and economy. Those differences stretch back centuries — Ukrainians have fought each other before as part of a broader struggle for influence between Russia and European countries, including during World War I.

That cataclysmic conflict helped lay the foundations for the country’s independence by leading to the collapse of the Austro-Hungarian Empire to which western Ukraine then belonged. It also contributed to starting the Bolshevik Revolution in Russia — to which eastern Ukraine belonged — followed by decades of Soviet subjugation. Today, with Ukrainians fighting each other again exactly a century after the war began, it’s becoming clear that Western countries have yet to fully learn its lessons.

Vladimir Putin’s attempt to exert influence over Russia’s southern neighbor using violence, intimidation and propaganda is fanning some of the old enmities most Europeans believe to have died out last century. Failing to understand the gravity of his challenge not only betrays the millions of Ukrainians who want to live in a fair, open society in the 21st century but also undermines European values across the continent.

Before the war began in 1914, much of today’s eastern Ukraine was part of the Russian Empire, having been absorbed by Empress Catherine the Great in the 18th century, then subjected to waves of Russification. Not western Ukraine, however: Its main city Lviv — then called Lemberg — was part of the Austro-Hungarian Empire. The Habsburgs had acquired the territory from the once-powerful Polish-Lithuanian Commonwealth when the partition of Poland during Catherine’s reign wiped that old empire off the map. In other words, western Ukraine’s architecture, language and culture were influenced by altogether different traditions.

World War I started with a successful Russian offensive into that western region, called Galicia, which split Ukrainians between those fighting for the Russian and Austro-Hungarian empires.

Combat was much more fluid than on the Western Front, with its stalemated trench warfare: The tide soon turned against the ill-equipped Russian army. Russia’s generals performed miserably under the misguided Tsar Nicholas II. Soldiers’ weapons were inferior when they were available at all and ammunition always scarce. At one point in 1915, a quarter of Russian soldiers were sent to the front with no weapons, provided only instructions to pick them up from the dead. By the spring of that year, the Austrians had retaken Galicia.

In Russia, the public backlash to Nicholas’s handling of the war helped prompt the Revolution, which toppled Nicholas in 1917. The following year, the new Communist authorities surrendered to the Central Powers (Germany, Austria-Hungary, Bulgaria and Turkey) by signing the Brest-Litovsk treaty. Russia lost control over most Ukrainian territory, where two separate independent Ukrainian states emerged. However, they were soon caught up in vicious fighting between the Bolsheviks and their opponents during the brutal Russian civil war, much of which took place on Ukrainian soil.

It ended in 1921, with the territory of present-day Ukraine divided between Soviet Ukraine (which would become a republic of the Soviet Union) and Poland, with small parts belonging to Czechoslovakia and Romania. Moscow gained control over western Ukraine only in 1939 under the Molotov-Ribbentrop pact between the USSR and Nazi Germany, which divided Poland between the two. After World War II, eastern and western Ukrainians coexisted in the same state, and continued even after the collapse of communism in 1991 finally delivered an independent Ukraine.

Russia was never pleased by that development, and since Vladimir Putin came to power in 2000, Moscow has sought to increase its influence by playing on the old divisions. During campaigning for Ukraine’s presidential election in 2004, the Kremlin openly backed the pro-Russian candidate from eastern Ukraine. When Viktor Yanukovych won in voting that was clearly fixed, street protests launched the Orange Revolution, which elevated new leaders whose base was in western Ukraine and who looked to join Europe.

After the disgraced Yanukovych staged a remarkable comeback to win the next presidential election in 2010, Moscow pressed its advantage again. More than just exerting influence, Putin wanted Ukraine to act as a bulwark against Western influence by keeping the nation inside Russia’s sphere of corruption and autocracy. The last thing Putin wanted was for Ukrainians to provide a model of democratization for Russians, which meant stopping Kyiv from joining Western organizations.

Where other parts of the old Russian and Soviet empires joined the European Union and NATO, they have been able to develop democratic institutions, civil society and innovative economies. In others, Moscow has sought to exploit ethnic and political divisions that exploded in the 1990s after remaining largely dormant during communist rule. In Moldova and Georgia, the Kremlin has done that by supporting small de facto independent, pro-Russian regions. Moldova’s Transnistria and Georgia’s Abkhazia and South Ossetia became so-called frozen conflicts that have sapped those countries’ resources and seriously complicated their prospects of joining either the EU or NATO.

Earlier this year, Moscow seized another opportunity when Yanukovych fled after plundering tens of billions from Ukraine’s coffers and crippling its institutions. Following its annexation of the Black Sea peninsula of Crimea, the Kremlin has sought to carve out yet another frozen conflict in the eastern regions of Donetsk and Luhansk. Putin has called them Novorossiya, or New Russia, after a tsarist name for the region that once included them.

Overcoming Ukraine’s civil conflict will require leaving behind the historical divisions Russia is striving to widen by focusing on forging a common identity centered around shared European values and aspirations. Ukraine can’t succeed without Western support in the fight not only against Russian influence, but also corruption and other grim legacies of Soviet rule. Nevertheless, backing for Ukraine remains controversial in the West, where many believe their governments have no business meddling in Moscow’s backyard, in a country with deep historical ties to Russia.

Which is where the lessons of World War I come in.

Before that cataclysmic conflict, many of its participants had assumed their complicated economic interdependence, together with the massive human and financial costs of war, would avert fighting between Europe’s major powers. That kind of thinking has also influenced Western behavior since the Soviet collapse ushered in the latest age of globalization.

Now the free world’s leaders have been at pains to respond to aggressive military actions by countries they assumed were following 21st-century rules. In Europe, Putin is seeking to impose the kind of 19th-century spheres of influence whose failure led to World War I by redrawing borders again, dividing a country of 45 million people who want to determine their own future living in a democratic state under the rule of law.

Olexander Sherba, a senior Foreign Ministry official, says that’s what the Maidan was all about. “We made our choice,” he told me. “It was an existential crisis and we made our choice. It can’t be brushed off.”

With the government weak and economy tanking, much of the hope rests on Ukraine’s blossoming civil society. It includes Oleksii Savchenko, who helped start a group of civilian volunteers who collect donations and deliver food, clothes and computers to the country’s ill-equipped soldiers, risking their lives to drive supplies directly to the conflict zone. “We’re struggling for our people on the front line,” he says, “and for our parents and our children.”

He believes Ukraine is the front line of the battle for European values. Although Putin can’t succeed in the long-term, his actions are helping perpetuate enmities whose violent effects will linger for decades if not longer. People in the West must also realize that the conflict isn’t about just Ukraine, but a battle to define the limits of their civilization.