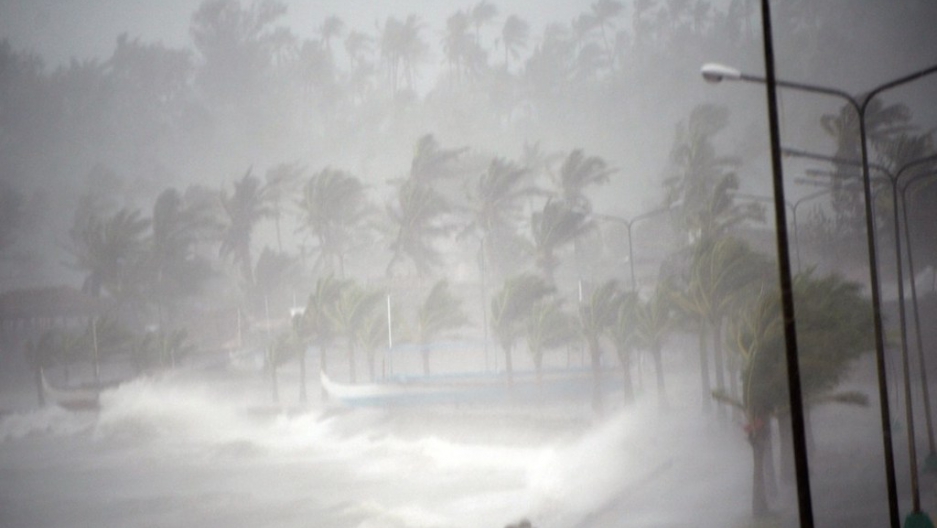 On the other side of the Pacific, in Lima, delegates from nearly 200 governments were knuckling down to the second and final week of the latest round of United Nations talks to hammer out a global climate treaty.

Scientists are careful to avoid linking individual storms — or droughts, floods and forest fires — to climate change. Yet the growing pattern of extreme weather events around the planet, most scientists agree, is a direct result of humankind’s pumping billions of tons of greenhouse gases into the atmosphere.

But if Typhoon Hagupit provided the thousands of negotiators with the kick in the rear end needed for a breakthrough in Lima, it was not showing.

Oxfam America spokesman Ben Grossman-Cohen described the talks so far as “lethargic,” with few nations willing to give up “extreme” negotiating positions.

Tasneem Essop, a climate expert at the World Wildlife Fund, added: “[The negotiators] seem to have forgotten that they are here to solve a planetary emergency.”

Possibly, just possibly, that may change in the next 72 hours as dozens of top world government representatives, including US Secretary of State John Kerry, descend on Lima to wrap up the talks. Here, GlobalPost breaks down the key issues.

The president of the National Coordination of Indigenous Peoples of Panama, Mezua Candido Salazar, and Norwegian Climate and Environment Minister Tine Sundtoft in Peru.

The talks are well past the stage of attempting to avoid climate change; instead, they are effectively focused on preventing things from turning from bad to devastating.

In 2010, the countries participating in the UN climate process set a goal to keep the global temperature rise below 2 degrees Celsius (3.6 degrees Fahrenheit) above pre-industrial levels. Exceeding that, they agreed, would expose the planet — not to mention humankind — to potential catastrophe.

More from GlobalPost: This year may be hottest on record; adds urgency to climate talks

Some actually argue that 2 degrees is too high. The problem is that we're already almost there. Just weeks before the Lima summit, the World Bank came out with a heavyweight study, “Turn Down the Heat,” that warns that a 1.5-degree Celsius rise is all but “locked in” (page XVII), thanks to past and unavoidable future carbon emissions.

So what are they negotiating about?

Worryingly, the Lima talks aren’t focusing on keeping the temperature down to a specific level.

Instead, the international poker game that these talks have become has gotten rather technical. “Mitigation,” “adaptation,” and “Nationally Determined Contributions,” or NDCs, are the biggest buzzwords here.

Mitigation means slowing climate change by slashing the amount of greenhouse gases we dump into the atmosphere. Populations emit these gases mainly by burning fossil fuels, but also by destroying forests and other natural ecosystems.

Adaptation is about how nations adjust to the new climatic reality. With impacts varying from country to country, adaptation can include anything from developing new drought-resistant crops or using water more efficiently, to building storm shelters or preventing the spread of tropical diseases.

Most poor countries, which stand to be worst hit by climate chaos, want adaptation — and billions of dollars in international aid to fund it — included in the final treaty, due to be signed in Paris in December 2015. Most rich nations want it to only deal with mitigation.

NDCs are the specific pledges to reduce greenhouse gas emissions that each country is due to announce early next year. Even assuming countries accept each other’s NDCs, the complicated discussion about how to measure them — and thus confirm that a specific country is living up to its pledge — is gridlocked.

How much the planet heats up above that “dangerous” 2 Celsius limit will be decided by what agreements the negotiators reach on mitigation and the NDCs.

But whether that is another degree Celsius, or even a positively scary 2 degrees more, no one here is predicting.

Of course, some countries are more interested in halting (and even reversing) climate change than others.

Those with large reserves of oil or coal, such as Saudi Arabia, Venezuela and Poland, have most to lose from a serious global crackdown on fossil fuels, and have been, to varying degrees, singled out for criticism. Meanwhile, the Obama administration’s strategy for reducing US emissions, although well received by many, has also met skepticism.

One campaign group, Climate Action Network International, has even been giving out Fossil of the Day awards to countries seen to be putting up obstacles in the talks.

Australia has won the gong an astonishing three times, including for trying to keep the “loss and damage” suffered by poor nations out of the treaty text and, separately, attempting to set up an alliance with other governments, like Canada, that share Australian Prime Minister Tony Abbott’s climate skepticism.

Other winners have included Saudi Arabia, for opposing measures aimed at helping women fight climate change; Switzerland, for threatening poor countries over their insistence on making an eventual treaty legally binding; Japan, for claiming that cash for coal plants in developing nations was climate funding; host Peru, for undermining the very environment ministry that is hosting the climate conference; and a group of seven developed nations that have failed to pay into the multibillion dollar “Green Climate Fund” to help poor countries cope with the climate crisis.

And yes, Australia was one of those seven.

More from GlobalPost: With its green cred under fire, Peru is hosting UN climate talks

So, might the negotiators pull a rabbit out of the hat and agree on a treaty text that would keep the temperature rise within the 2-Celsius threshold? Or maybe wording that would keep it to, say, 3 degrees?

No one here is saying. And that’s for a good reason: whatever treaty is eventually signed, there will still remain a laundry list of unknowns.

One of the biggest is whether nations will actually meet their stated targets. In the run-up to Lima, announcements from three key players unleashed a wave of optimism that some of the biggest polluters might finally be getting serious about climate change.

In November, the United States and China reached a groundbreaking bilateral agreement that will see Beijing peak its emissions by 2030, while Washington will shrink its carbon footprint around 27 percent of 2005 levels by 2025. Meanwhile, the European Union announced it would slash emissions 40 percent compared to 1990 levels by 2030.

Combined, the EU, US and China account for well over half of the world’s carbon emissions. Yet none of that big three will face any sanction should they fail to meet their voluntary targets. And the Obama administration’s plan will still need backing from Congress — now controlled in both chambers by a Republican party that largely refuses to accept climate change is real.

Another huge variable is India. Its current carbon emissions of 1.7 tons a year per person is just one-tenth of the US'. But that’s set to rise rapidly as India develops, lifting hundreds of millions of its 1.2 billion people out of grinding poverty.

Whether India develops sustainably will be one of the keys to the climate change battle; just think of all those new members of the Indian middle class buying cars for the first time.

India’s negotiating team in Lima is keeping its cards close to its chest, demanding financial support and technology from rich countries while avoiding, so far, specific commitments of its own.

“We have a right to development,” says Ravi Prasad, one of the negotiators, when asked how Delhi will tackle climate change.

No one can argue with that. At least not while richer nations fail to agree to stronger measures themselves.