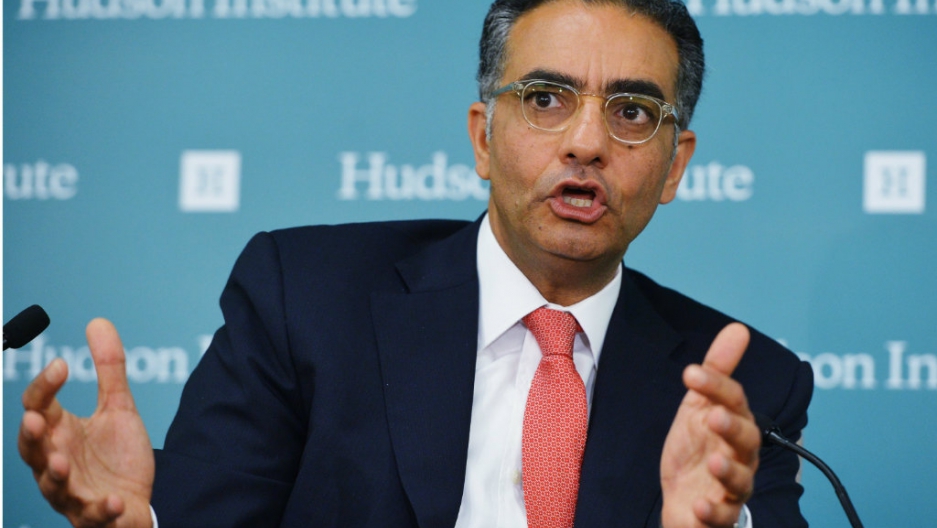 Internet Corporation for Assigned Names and Numbers (ICANN) President and CEO Fadi Chehadé speaks on internet governance during a discussion at the Hudson Institute on April 4, 2014 in Washington, DC. A plan unveiled in March would see the US relinquish its key oversight role for the Internet, handing that over to 'the global multi-stakeholder community.'
Credit: MANDEL NGAN
Share

The internet as you know it is about to fundamentally shift. While Americans are embroiled in debates over net neutrality (watch John Oliver explain it) and data surveillance, little attention has been paid to issues that affect global internet security as a whole. Big changes are ahead, and there’s been a surprising lack of discussion about how the web we’ve come to know and love will be managed, and who will be at the helm.

The organization that currently maintains the easy global flow of the internet, the Internet Corporation for Assigned Names and Numbers (ICANN), is about to be released from under the US Department of Commerce. Since 1998, ICANN has been operating the global domain name system from within the US government, including setting policy and managing the functions of root name servers. But that’s all about to change.

The nonprofit, which is based in California, has become too big and too important to be under the sole control of the US, and so in September 2015, ICANN will emerge as an independent entity – if they can conceive and implement a system of accountability that the US agrees to.

In an attempt to create a system through which everyone who uses the internet has a say in running it (democratic principles being one of the internet’s founding ideals), a conference was convened in Sao Paulo, Brazil in April to discuss how the international community might come together to govern the internet.

The NETMundial Conference brought thousands of groups together to discuss how they might implement a “multi-stakeholder” model of governance, through which countries, corporations, NGOs and citizen experts would all have a say in global governance of the internet.

ICANN is leading the charge to create an international body that would be tasked with not only maintaining the technical elements of the performance of the internet, but would also address questions of global internet governance and accountability, and create a mechanism to levy and enforce sanctions.

With a looming deadline and thousands of groups all trying to insert their opinions – from liberal nonprofits to the government of Uzbekistan – the task is a daunting one.

ICANN’s best idea so far has been to create something akin to “a United Nations Security Council of the internet.” By setting up a “coordination council” with 20 members and 5 permanent seats, this body would channel concerns through a multi-stakeholder panel made up of delegates from civil society, nonprofits and technology corporations, as well as state representatives.

It sounds ideal. But can something so complicated come so easily?

Already there are cracks in the foundation and a schism looming between long-time internet governance nonprofits and the countries and corporations that want more control. It’s a tug-of-war that has a firm deadline, and the players are all scrambling to keep up.

Experts at the Centre for International Governance Innovation (CIGI), an Ontario-based think tank, have been studying the ICANN dilemma. The group’s research suggests that the public approves of the proposed multi-stakeholder system: In a 2014 survey of more than 23,000 people of all ages in 24 countries, CIGI found that 83 percent of internet users believe access to the internet is a basic human right and 57 percent agree with the multi-stakeholder model.

“People see the internet as critical to their own livelihood, freedom of speech, knowledge awareness, and almost a vital instrument of not just communication, but also increasingly economic survival,” said Fen Hampson, director of CIGI’s Global Security and Politics Program. “It’s reflected in the simple question: do you think it should be a human right?”

Even users in Tunisia are in favor of the multi-stakeholder model suggested by ICANN, NETMundial and CIGI. The Tunisian government has a history of tough internet censorship laws, and the country’s status has only recently been upgraded from “not free” to “partly free” in Freedom House’s annual Freedom of the Net Index.

“Were an intergovernmental body like the UN to take up a role in running the internet at a global level, key decisions would be taken by the same telecommunications ministers that restrict online freedoms at home [in countries like Tunisia and Egypt],” said Adrian Shahbaz, internet freedom researcher at Freedom House, a US-based advocacy group.

Shahbaz emphasized the value of having a variety of collaborators – not just government officials – make key decisions on how to run the internet in an environment that fosters accountability, transparency and a commitment to free speech and human rights.

Bumps in the road

Not everyone shares the positive outlook that many governments seem to have. Prominent internet freedom advocacy organizations have said that the very notion of a council goes against the principles of a free and transparent internet. Some have come out forcefully against the idea, saying it’s too much of a top-down structure and isn’t inclusive enough.

However, the clock is ticking, and CIGI believes it’s better to get started and adjust as needed.

“The bodies that have been charged with looking at this have been spinning their wheels, because some people have some very ambitious ideas about corporate governance, and there are governments in the mix who want greater control,” Hampson said. The NETMundial model is “the best the way to deal with the transition issue: it’s simple, it’s elegant, it’s more politically feasible than the other options,” according to the CIGI team.

But even Hampson acknowledges that ICANN’s plan is not foolproof. To push through, he said, the plan must “pass the political smell test”: the US government has to agree with it.

“At the end of the day, we have to recognize that the US has a veto and they have to be happy with whatever is being proposed,” Hampson said.

CIGI’s Gordon Smith pointed out in a recent interview that some large American corporations – even ones who have been historically unfriendly to the idea of net neutrality, including the Motion Picture Association of America (MPPA) – “did very well [at the NETMundial Conference] and had a good outcome, a result in their favour.”

Other stakeholders, such as the UN-affiliated International Chamber of Commerce and the Internet Architecture Board, who oversee the influential nonprofit Internet Engineering Task Force (IETF), have come out in recent weeks slamming both the NETMundial coordination council plan and ICANN. IETF, via the Internet Society, also issued a statement of dismay. Citizen participants, many of whom recall the last time corporate organizations tried to get involved with internet governance – remember SOPA? – aren't overjoyed, either.

The lack of support is a significant dig at the present initiative on the table. In particular, the International Chamber of Commerce, as the United Nations’ horse in the race, should have been easy to get on board. The fact that they’re backing away doesn’t bode well for ICANN’s plan.

Over at tech gossip site The Register, blogger Kieren McCarthy has accused ICANN of “building castles in the sky.” The Internet Architecture Board and the International Chamber of Commerce have issued letters that said respectively that they will “not participate” and “cannot endorse” the plan as it currently stands.

So what’s next? Where does ICANN go from here, and can a plan for international internet governance be salvaged before September?

“Building bottom-up governance processes is one of our highest priorities with respect to governing ourselves on the Internet,” Internet Society president and CEO Kathryn Brown wrote in a blog post Sunday. Brown also called on the internet governance community to carry through on earlier promises “join forces” and create solutions through open dialogue.

A meeting set for Dec. 17 with ICANN's CEO is set to include representatives from the leading internet governance NGOs and other advocacy groups. There will likely be a compromise on the question of the coordination council and how to move forward with more popular support. No matter what, without these groups on board, ICANN faces the greater challenge of convincing the public that the internet won’t just be controlled by a bureaucratic hierarchy of governments and corporations.