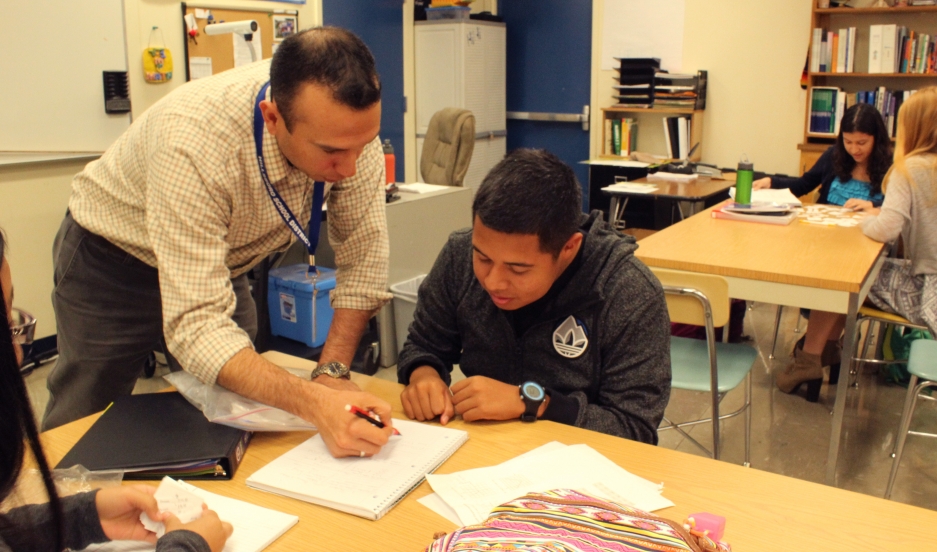 Hillsboro High teacher Moises Curiel teaches Algebra 2 in Spanish. To honor the students' bilingualism, the school will offer qualifying students a bilingual seal on their diploma.

Let's take a trip back to September 1995, when Republican presidential candidate Bob Dole was talking about education on the campaign trail. “If we want to ensure that all of our children had the same opportunities — yours, mine, everyone’s — in America, alternative language education should stop,” he said.

"Alternative education" was a code for bilingual education, and Dole was speaking at a time when states like California banned bilingual programs. The idea was that learning foreign languages was fine, but not to the detriment of being fully literate in English. 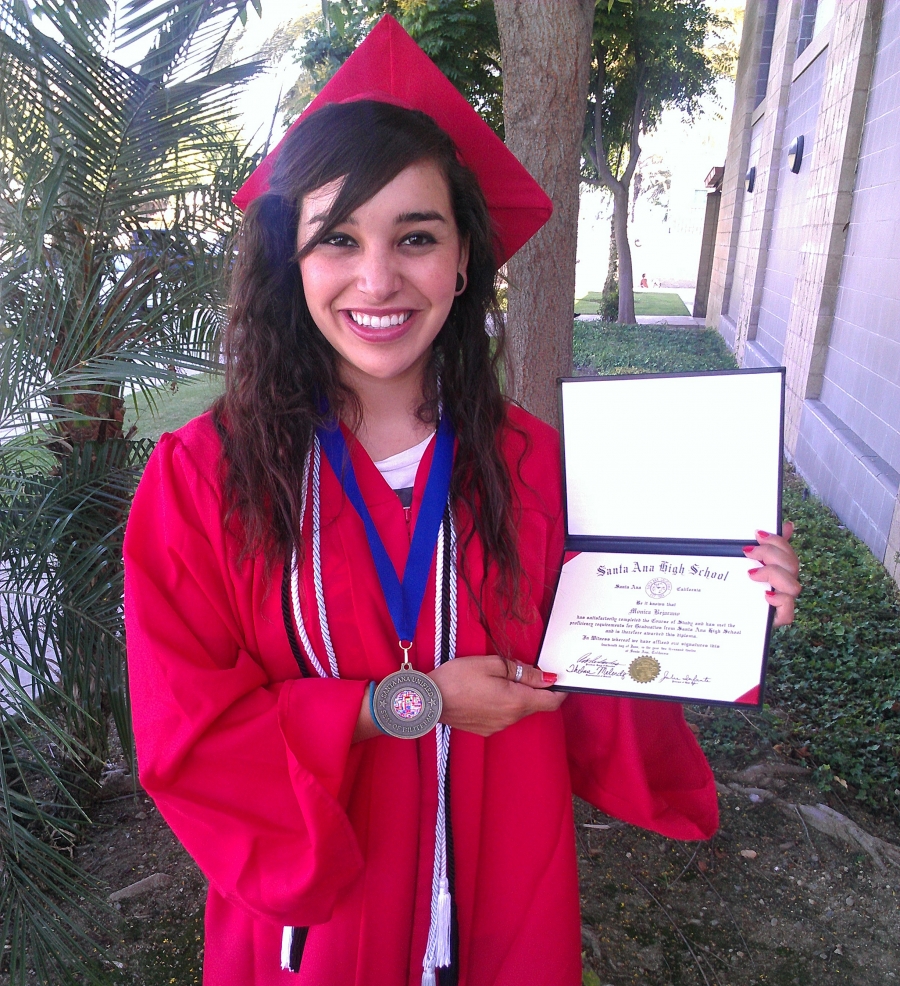 A 2012 graduate of the Santa Ana Unified School District wears a medal honoring her bilingualism and holds her diploma with California's bilingual seal.

But those days are fading — and fast. Just head to Hillsboro High School, near Portland, Oregon, and step into the Algebra 2 class. The concepts — open intervals, integers, logarithm rules — are already challenging for most students. Now learn them in Spanish.

From start to finish, teacher Moises Curiel instructs in that language, and the students plug away, asking questions and working through problems in groups.

Learning in another language isn’t a problem, because the students have two things in common: They all know English, and they’ve studied in Spanish for years. Many of the students here either grew up speaking Spanish with their families, or want to speak Spanish themsevles, like Peter Kuskie. He's a sophomore who grew up speaking only English.

Yet Kuskie’s Spanish is good — really good — because he spends most of his school days moving between classes instructed in both languages.

And while dual-language learning been around for years in the US, what’s new is what Kuskie and many of his classmates will get on their diplomas when they graduate: an embossed seal honoring their bilingualism.

The effort started in California, spearheaded by a statewide coalition called Californians Together, and is now spreading to states like Illinois, New York and Florida. Along with Spanish, there are bilingual diploma seals offered for Mandarin, Vietnamese and other languages

“What we ... have been about, really, was to try and change people’s perspectives as well as their feelings about bilingualism,” says Shelly Spiegel-Coleman, executive director of Californians Together.

Arturo Lomeli, Hillsboro High's principal, hopes the seal will have more than symbolic value. “It’s so demanding, it’s so rigorous,” Lomeli says. “They’re walking in and they’re processing English, Spanish and math and inputting in Spanish what they’re hearing — processing in English, outputting in Spanish.”

Lomeli also points to how some — but not all — studies show that bilingualism slows the brain from aging. Students learning another language are also less distracted, and even earn higher salaries over time. 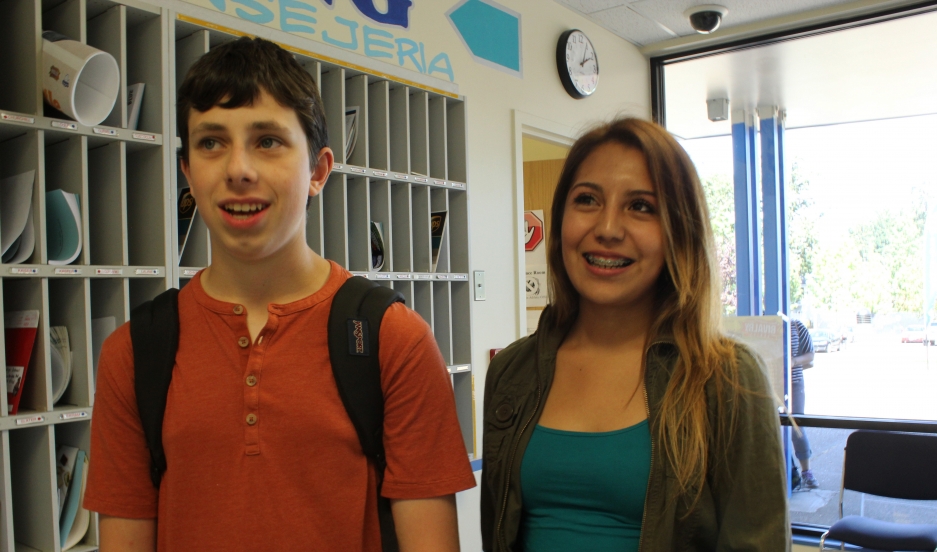 Peter Kuskie and Maria Regalado are students at Hillsboro High in Oregon and are on track to receive a new bilingual seal on their diplomas.

Spiegel-Coleman says the United States faces real risks if it continues to be a monolingual culture.

“There are issues of national security," she says. "You’ve heard from the Department of Defense over and over again that they are lacking professionals who can deal and communicate and negotiate in countries across the world in the language of that country. Going through an interpreter, you lose something."

But while bilingualism is strengthening in some parts of the US, foreign language instruction is dropping nationwide. One reason is that the federal “No Child Left Behind” law, enacted 12 years ago, stressed traditional subjects.

Anti-immigrant sentiment in some parts of the country also doesn’t help.

Principal Lomeli says he can’t control the political rhetoric, but insists "we need to catch up with the rest of the world. We need to prepare students for a global society, and we haven’t been doing that.”

Some students aren't worried about issues that are quite that big. For them, mastering another language is a personal matter. Maria Regalado, a junior whose parents are Mexican says, “I’ve had Spanish since I was born. So, I just get to keep it and not let it go, you know?"

She says now she can visit Mexico and “really talk” with her family, and she thinks her improved Spanish will also help her career. She wants to study criminal justice and become a police officer, and she knows some Latino families in the area can't speak English and can feel distanced from law enforcement. She's looking forward to bridging that gap.

Kuskie, her classmate, says it was his mom who convinced him to try and become bilingual. She was turned down for a job at a job at health clinic in Hillsboro, an area flush with new immigrants.

“She knows the people there and then they said, ‘Well, you need to learn to speak Spanish.’ So that’s why she couldn’t do that. So she’s been trying to learn Spanish, too,” he says.

Not everyone at the school is on the bilingual track. Kuskie says his friends who aren't in the program ask him why he takes classes like Algebra 2 in Spanish, and he does acknowledge that it is “a little bit” harder.

But he's up for the challenge, he says. And for students like Kuskie and Regalado, whose goal is real bilingualism, they'll have a seal on their diploma to prove that come graduation day.