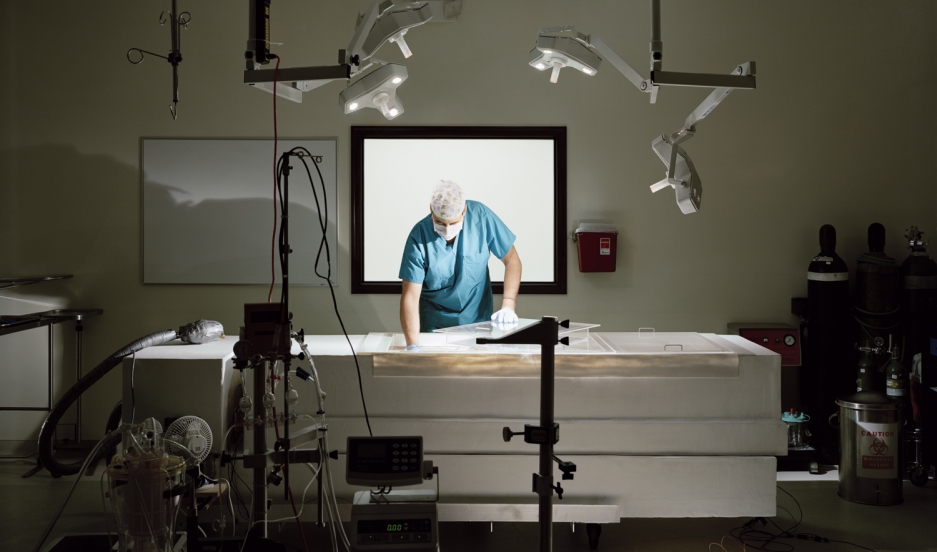 Photographer Murray Ballard says he expected a cryonics facility to look like something out of a sci-fi movie scene. But when he first walked into a lab in Phoenix, Arizona, it looked more like an industrial warehouse than a high-tech research facility.

Ballard says he was intrigued by the contrast between such an ambitious endeavor — freezing bodies after death in the hopes of reviving them in the future — and the somewhat unremarkable architecture and equipment.

The science on cryonics is still, for obvious reasons, unclear. "There's research that's being done with the liver, where a human liver has been taken down to cryonic temperatures and then has been successfully thawed out and doesn't show any signs of being damaged," Ballard says. "But, of course, we're all very aware that a liver is a very distant organism to a brain in a human being."

And no one, he says, is more aware of that than the scientists who are working on cryonics. "After doing this project for six years, cryonicists are actually pretty skeptical themselves," Ballard says. "The cryonicist's answer is, 'If I want to live forever, I stand a much better chance if I'm cryonically preserved than if I do if I am buried or cremated.'"

Regardless of the chances of cryonics working, Ballard says, "I feel like my job is really to put this subject out there for discussion and thought, and to kind of question it and inspire a conversation around it. I'm not really trying to predict how likely it is that this will work."

This photo slideshow was originally published by PRI's To the Best of Our Knowledge in collaboration with FlakPhoto, an independent photo/arts collaborative that promotes the discovery of photographic image-makers from around the world.