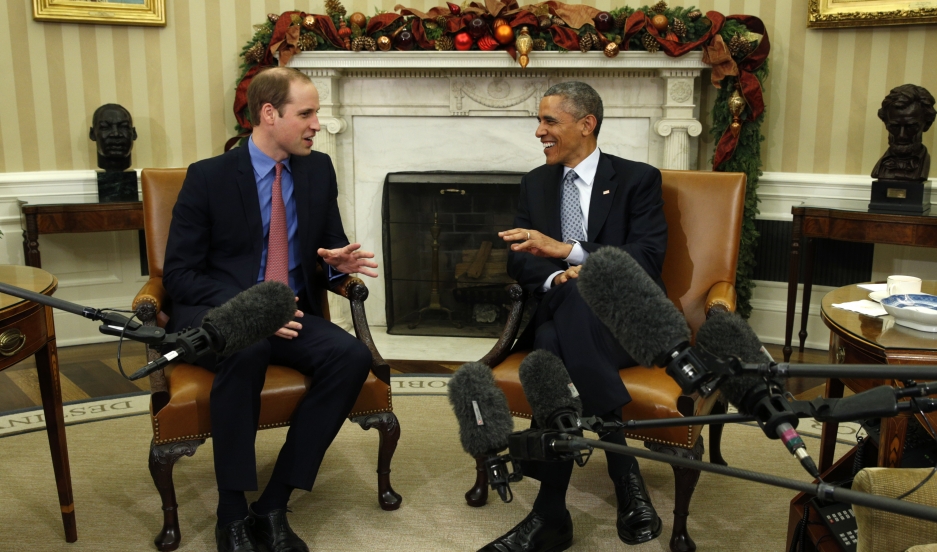 US President Barack Obama meets Britain's Prince William in the Oval Office of the White House in Washington December 8, 2014.

Today in Washington, Britian's heir to the throne and the US president seemed to trade roles for a bit as they visited. President Obama has recently been accused of being imperial because of his unilateral action on immigration, while Prince William is being seen by some British as a bit too political in the US.

First, there was William's fiery speech about environmentalism at the World Bank and his criticism of China's role in the skyrocketing ivory trade. And then, he will hold a fundraising dinner (in this case, for charity) where a seat will reportedly go for as much as $50,000.

The Guardian looks at how William's US trip would play back home (spoiler: it wouldn't) and how it differs from a previous US tour by his brother, Prince Harry. Beyond discussing world affairs, the prince and the president also spent their 15 minutes together trading tips on fatherhood and press relations.

Meanwhile, the British might consider this tip from America on abortion protests

There's been controversy in the UK recently over aggressive protesters harassing women who visit abortion clinics, blocking their entrance, photographing them and holding up large pictures of fetuses. An opposition party leader thinks the US, and other countries, may have the answer.

Parliamentarian Yvette Cooper is looking across the pond (and across the channel) to the US, Canada and France, where there are laws requiring buffer zones around abortion clinics and preventing protesters from blocking the entrances to clinics. There's no indication whether the Conservative government will take up Cooper's suggestion, according to ITV.

The 'Nikola Tesla of video games' has died

Tesla is hardly a household name, but he was critical to the development of AC current. In the same way, you may not know Ralph Baer's name, but you certainly know his work.

If you are old enough, you may have played his runaway hit electronic game, Simon, where you had to remember a series of lights and sounds and punch keys to repeat the sequence. But Baer, a Jewish immigrant who fled Nazi Germany, is also the one who changed the TV forever.

Baer is credited with the idea of using a TV screen as a gaming platform — and came up with the first video console, known as the Magnavox Odyssey. The Odyssey didn't win out over Atari, which came out with a console five years later, but Baer's idea has certainly proven itself out — with the sales of millions of Nintendos, Play Stations and Xboxes over the years. PRI's The World looks at Baer's legacy after he died this weekend at age 96.

This Chinese crook had a penchant for gold

One of the latest targets of Chinese President Xi Jinping's anti-corruption probe sounds like a villian in a James Bond film. Lieutenant General Gu Junshan, the former deputy director of logistics for the People's Liberation Army, is accused of selling off military positions in exchange for bribes, to the tune of more than 30 billion yuan — nearly $5 billion.

While that's outlandish enough in its own right, it turns out that Gu wasn't satisfied with simple bank transactions or currency. He liked to deal in gold. Gold bars, gold dust and — especially — gold Buddha statues.

According to the South China Morning Post, he's reported to have dished out his own bribes by packing Mercedes sedans with gold bars and then handing over the keys. Now that's riding in style.

In the US and Western Europe, maps are almost as up-to-date as the land itself. New neighborhoods, new roads, even traffic accidents, show up practically in real time. But in developing parts of the world, maps can be years, or even decades out-of-date. That is, if they were even accurate to begin with.

Bad maps mean delays in responding to disasters and providing services — which can entrench the division between rich and poor. Now, a new nonprofit, the Missing Maps project, is seeking to update all those maps to improve access to poor areas. They've been working hard in Sierra Leone and Liberia, two countries on the frontlines of the Ebola epidemic.

This record-setting 4.16-pound white truffle got a massive bid at auction http://t.co/yf16FjRpMi pic.twitter.com/jpyeMw0sst

As winter starts to settle into the Northern Hemisphere, with snow projected across much of the northeastern US on Tuesday, Australians are already in summer, and it is shaping up to be a doozy. In Marble Bar, Australia, Monday was the third day where the mercury reached at least 117 degrees Fahrenheit (47.2 degrees Celsisus) — with highs of 118 on Sunday and Monday and 117 on Saturday, according to AccuWeather.