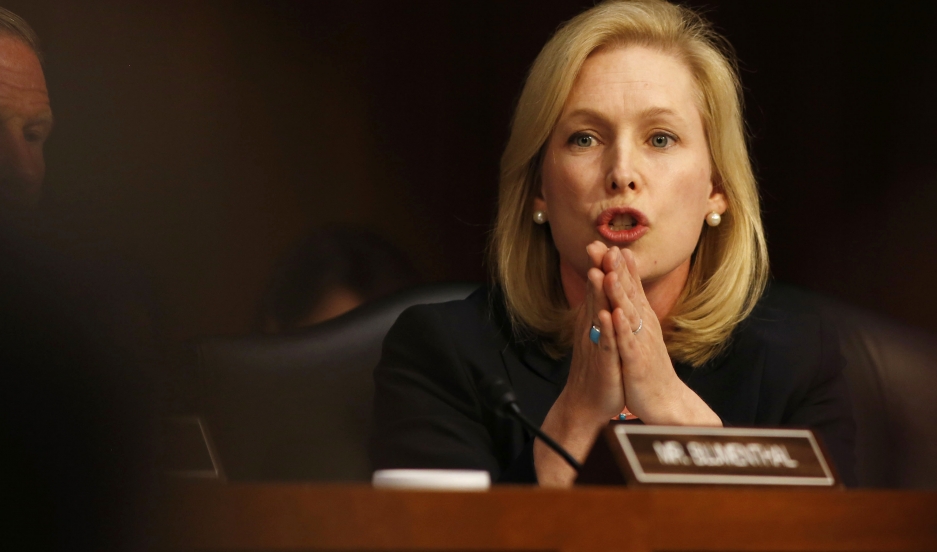 Sen. Kirsten Gillibrand (D-N.Y.) speaks about pending legislation regarding sexual assaults in the military in front of the Senate Armed Services Committee on June 4, 2013.

A new Pentagon report released this week shows progress on reducing sexual assaults in the military. But it's also renewing the fight over whether reforms have gone far enough.

Reporting is up thanks in part to the reforms included in the 2013 defense budget and a bill pushed through by Sen. Claire McCaskill of Missouri. McCaskill’s bill, known as the Victims Protection Act, allow victims formal input on whether their case is tried in military or civilian court, and allow survivors to challenge their discharge or separation from service, among other things.

“There are high levels of satisfaction with command climate, high levels of satisfaction with their special victims counsels and victim advocates," McCaskill told reporters on Thursday after the Pentagon report was releasted. "And I think 73 percent of [reporting victims] saying that they would recommend that others report is a very important number."

But Sen. Kirsten Gillibrand of New York thinks the progress is uneven: The report found that about 62 percent of people who did report sexual assault or rape were retaliated against. “That is unacceptable. That is not a measure of justice," she says.

Gillibrand attempted to push through her own, stricter bill in March, but she ultimately lost. The Military Justice Improvement Act was filibustered in the Senate in March, falling fives votes short of cloture.

“The key part of her reform, which a lot of the military did not want and which Claire McCaskill did not want ... is to take reporting of sexual assaults out of the chain of command entirely,” says Todd Zwillich, who interviewed Gillibrand. Her law would put decisions about sexual assault prosecutions in the hands of the military justice system instead of commanders.

By removing sexual assault reporting from the chain of command, Gillibrand argues that victims have a higher level of protection. But McCaskill and other supporters of existing reforms say while they agree that retaliation remains a problem, the majority of retaliations come from peers and not commanders.

Despite the pushback, Gillibrand is now trying to revisit some of the reforms that failed to pass in March. “The Defense Authorization Bill is back up on the floor next week," Zwillich says. "Gillibrand is pushing for a vote, but she probably won’t get it — leaders don’t want to open that vote up to amendments because it’s the end of the year.”

With a vote unlikely to come next week, Gilibrand is pushing for a separate vote on the issue. If that effort fails, Zwillich says, Gillibrand may use the nomination of Ashton Carter, the Obama Administration’s pick to replace outgoing Defense Sec. Chuck Hagel, as a platform to shine a new spotlight on military sexual assault.

“The military said, ‘Give us a year, give us a year and we’ll show you we take this seriously,'” Sen. Gillibrand says. “The one measure about whether commanders take this seriously is whether they’re allowing victims to be retaliated against for reporting. For that number to not budge, for that number to be exactly where it was last year, that shows complete failure.”