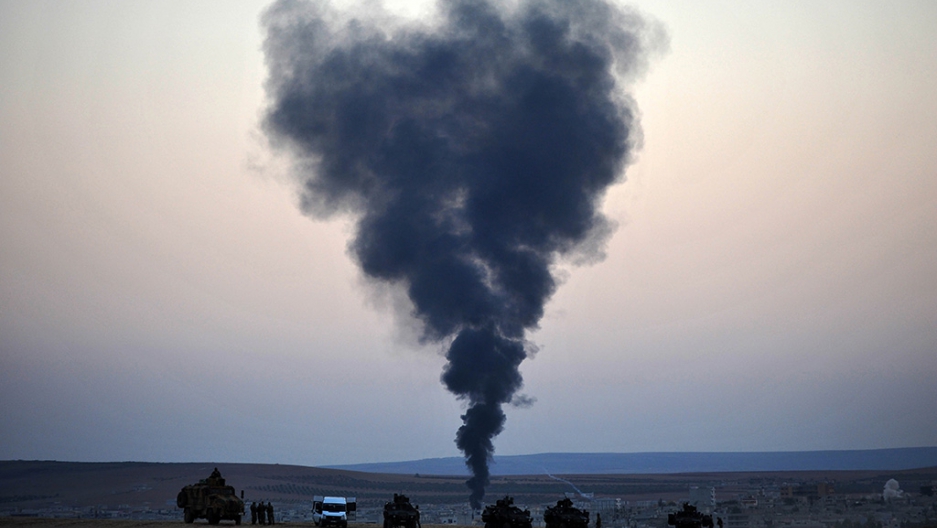 Thick smoke rises from the Syrian town of Kobani as Turkish soldiers stand guarded on the Turkish side of the border during fighting between Islamic State militants and Kurdish People's Protection Unit (YPG) forces.
Credit: Kutluhan Cucel
Share

CAIRO — As the world unites in its determination to defeat the Islamic State (IS), we must all acknowledge that to complete this task fully and ensure extremists like this are never able to pose such a threat, bombs, bullets and boots are only a small part of what is actually needed.

The CIA estimates that IS has as many as 32,000 fighters, and that number is growing. One Iraqi expert even estimates the figure to be greater than 50,000.

The denunciation of IS by Muslim scholars, and the unity of Arab governments against the barbaric group are a testament to the fact that IS does not spring from intrinsic Arab culture or Islamic faith. It has been born from and nourished by the utter hopelessness facing the youth of the Middle East.

The hard truth is that the economies of the Middle East are unable to support their respective populations.

According to a 2014 World Bank report, the Middle East and North Africa (MENA) would need to create 100 million jobs by 2020 in order to sustain the present rate of unemployment. At the same time, the youth population is soaring.

The International Monetary Fund (IMF) reported a MENA youth unemployment figure of around 25 percent, the highest in the world.

In addition, income inequality is growing. Normally, education is a route for renewal and revitalization, but as the IMF notes, MENA is unusual. Unemployment tends to increase with education.

Today’s MENA youth are better educated than ever before and have high expectations for their future. Unfortunately, their expectations are being crushed.

Among the region’s youth, it is a common belief that they are being forgotten and that their governments do not care about their future.

The Islamic State exploits this disenchantment to lure the region’s youth. Unemployment is creating an army of conscripts for the extremists.

In order for the region to reform and transform its economies into one that serves all, three key changes will be essential.

First, governments should create a program to build infrastructure across the region. Facilitating the transport of goods and services regionally would lower costs and spark innovation. Projects must include new roads and railways, expanding airports and seaports. An infrastructure bank should be created to allow funds from the wealthiest parts of the region to reach and support the countries most in need of infrastructure investment.

Second, governments need to acknowledge that private sector growth is the true engine for jobs and economic prosperity; the bloated public sector across the region must be fundamentally reformed to ensure that while essential services are being provided, resources are used inefficiently. Each country has to reform corporate taxes, welcome profitability and business expansion, and facilitate starting businesses.

Third, the Middle East needs a solid manufacturing base. It cannot just rely on providing services or functioning as a transit hub. The region needs to manufacture many of the goods it consumes.

My company, Carbon Holdings, is investing in petro-chemicals and plastic production that will be able to trigger a true transformation of the Egyptian economy. With the availability of such raw materials, large manufacturers are already discussing establishing manufacturing firms in the country; this has the potential to create hundreds of thousands of well-paying jobs.

All over the region, governments need to support bringing foreign manufacturers to establish plants in their countries. This, combined with the previous two elements, will act as a catalyst for true economic transformation.

We know we cannot stay where we are. The entire MENA economy urgently needs to be transformed; jobs and opportunities must be allowed to flourish. It is only through economic prosperity that we can truly defeat the extremist Islamic State.

Basil El-Baz is a leading Egyptian Industrialist, and is the chairman & CEO of Carbon Holdings, an oil and gas company.