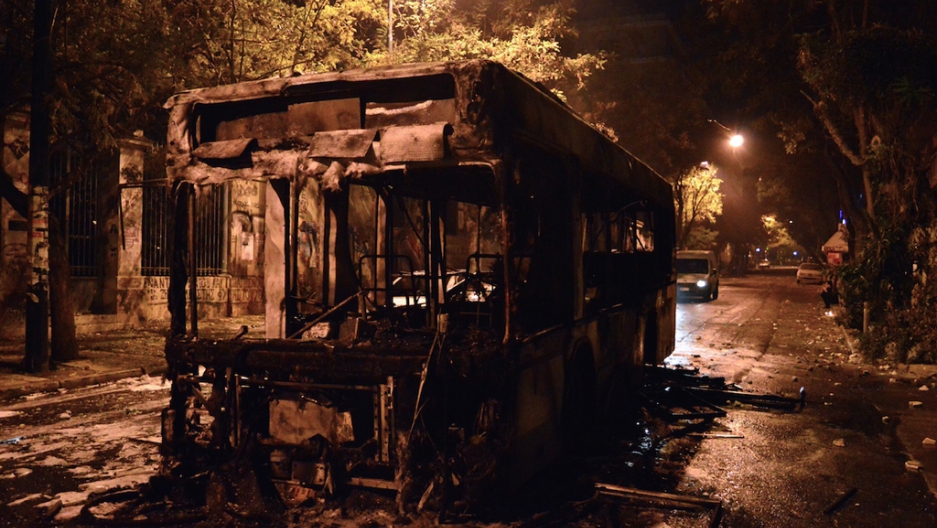 A burned out bus on the streets of Athens following protests on Dec. 5, 2014, in support of Nikolas Romanos, an young anarchist who has been on hunger strike for nearly a month.
Credit: Yiannis Baboulias
Share

Romanos' plight has mobilized protesters in Athens, who have been turning out in droves nearly every night to support his cause.

Today, the wave of solidarity with Romanos coincides with protests commemorating the death of Alexandros Grigoropoulos — a friend of Romanos' who was shot by police on Dec. 6, 2008.

Athens braces for the worst.

Romanos' story has touched the public. He was arrested for armed robbery in 2013, and sentenced to more than 10 years in prison. With the help of an education scheme that allows prisoners to continue school while incarcerated, Romanos aced his university entrance exams and secured a place at the School of Business Administration of Athens.

But prosecutor Grigoris Peponis decided Romanos will not be allowed to attend. Justice Minister Haris Athanasiou went as far as to say “God himself could not receive [educational] leave,” speaking about Romanos’ case.

In an unstable political climate, Romanos’ fate is tied to more than simple protest politics. Timing is crucial:

On Dec. 6, 2008, 16-year-old Alexandros Grigoropoulos was shot by a police officer. Minutes later, he died in the arms of his best friend, none other than Nikos Romanos. Athens saw two weeks of unrest. The riots marked a generation.

Six years later, those who protested have not forgotten. Every year on Dec. 6, teenage demonstrators carry placards around Athens that clearly state “that bullet wasn’t fired at random, hands off the youth.”

In the past few days, a profound wave of solidarity has swept Greece. From peaceful press conferences and talks, Romanos’ parents declared their unwavering support for their son and his hunger strike, which they say “demands what should be an unquestionable right for every prisoner.”

In the streets, skirmishes between anarchists and the police in the rebellious quarter of Exarchia saw cars and a bus burn on Tuesday and the offices of junior coalition partner PASOK were attacked with Molotov cocktails late Friday night.

Athens is on foot, concerned about the fate of the 21-year-old and what that might mean for the country.

His life story reads like a thriller: His friend's murder seems to have changed him forever. Following Grigoropoulos’ death, Romanos chose not just anarchy, but "armed struggle," as he called it.

In 2013, during a bank robbery in the northern city of Kozani, Romanos and three other anarchists were arrested. What followed put his name in the spotlight: The police — despite extensive evidence that the group didn't threaten the hostage or resist arrest — brutalized the three would-be robbers to the point where their mugshots were photoshopped to cover extensive bruising.

A sloppy police cover-up operation followed. Police tried to obscure details about when the anarchists were beaten up and how, and they attempted to link the three with terrorist group “Conspiracy of the Cells of Fire.” As a result, the three were charged under draconian counter-terrorism laws introduced a decade ago, which lawyers like Anny Paparousou, who has worked on the Conspiracy of the Cells of Fire case, have criticized as too general and easy to abuse.

The case against Romanos and his accomplices collapsed in court recently.

Meanwhile, Romanos got married in prison and managed to get the grades required to secure a place in the Greek education system — to the point where he was awarder a grant by Greek President Karolos Papoulias, which he refused.

Romanos has not been charged with terrorism. But two cases concerning terrorism acts are still pending — a fact that has kept Romanos from attending school. The only way he could think to claim his rights was to use his “body as a roadblock, for a breath of freedom,” as he stated at the start of his hunger strike.

At N.Gennimatas general hospital, where Romanos was transferred after his health began to deteriorate, the atmosphere is tense. Hundreds of protesters are gathered outside. Inside, police officers are everywhere, trying to control the flow of information.

The minister of justice is working on a proposal that would allow Romanos to take distance learning courses. But Romanos has rejected that idea, insisting he should be able to attend classes.

With the help of the doctors in the hospital, Romanos is successfully resisting an order issued by a district attorney to force feed him. His lawyer confirmed last week that the order had been issued, adding that “This is obviously torture. It’s something never seen before in Greece.”

This case comes at a time when the legitimacy of the coalition government is in question. The “success story” spin it tried for most of 2014 has collapsed, after an unlucky attempt to exit the country’s austerity program by borrowing from the markets. In February 2015, Greece will elect a new president, and the coaltion governement only has 151 of the 180 votes it will need in a parliament of 300.

It seems more and more unlikely that they will manage to get cross-party support. The opposition party, the radical left SYRIZA, is leading in the polls by as much as 10 percent, and has repeatedly denied the possibility of working out a deal with the current government. If they fail to do so, Prime Minister Antonis Samaras’ liberal-conservative New Democracy will have no choice but to declare early elections, which they will likely lose based on the polls.

Pressure is mounting on all sides: there is not one, but five hunger strikes taking place in Greece right now. One of them, right outside Greek parliament, is being staged by 150 Syrian refugees protesting their destitution.

If Romanos’ health deteriorates further, or if the worst happens and he dies, Athens is likely to see major disturbances. Already there have been numerous smaller scale demonstrations and the extensive mobilization of the police.

Insiders told GlobalPost that the government is split between those who are keen to compromise and avoid further riots, and those who wish to show their resolve.

Romanos’ father said in one of his frequent announcements to supporters and the media that “for whatever happens to my son, the state is responsible."

Today, thousands of people demonstrate to commemorate Grigoropoulos and show solidarity with Romanos. It is no exaggeration to say that the current government would not survive a wave of protests like the one Athens saw in 2008.