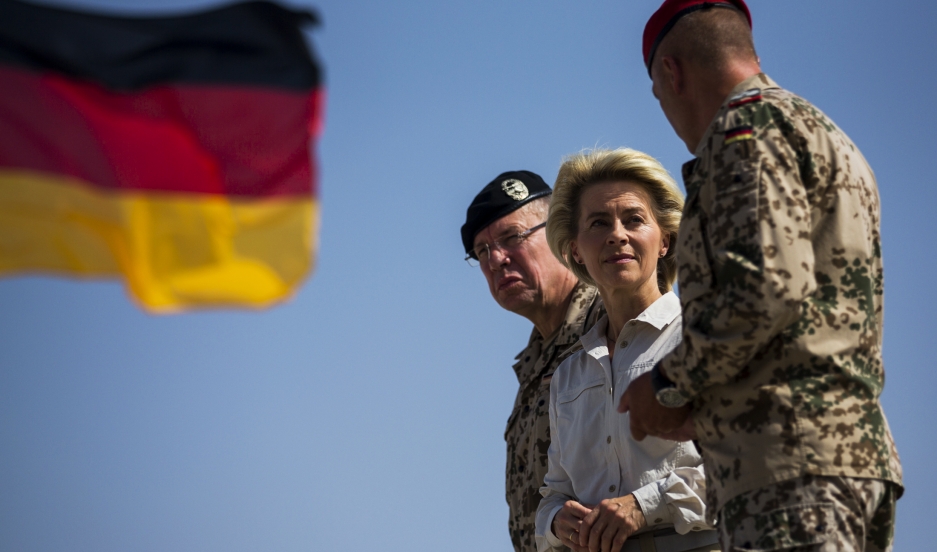 Having just finished an incredible set that started with the words, “Finally, we get to play for our heroes,” Metallica didn't leave the stage before leading the crowd in this popular chant.

I was in the midst of almost a million people who travelled to the National Mall to see the Concert for Valor, held in honor of America’s veterans — and I was floored. The sense of patriotism, and the respect and honor directed towards the heroes of the night, stood in stark opposition to the experiences I had growing up in Germany and serving as an Army officer and paratrooper in the Bundeswehr, Germany’s armed forces.

It was the peak of a phenomenon I have noticed with startling frequency since moving to the United States a few months ago. Whenever I see someone in uniform, be it on the Metro or in a coffee shop, a bystander usually approaches the uniformed person and offers some kind words of thankfulness and praise. Support for America’s servicemen and servicewomen comes when least expected: in TV commercials, on food packaging, during sporting events and even in church.

I have noticed discounts on everything from plane tickets to baseball games, as well as the special perks veterans receive, such as priority boarding on flights, sometimes accompanied by rounds of applause. I’ve seen parents proudly sporting stickers on their cars with catchy phrases like “My Son Protects Your Freedom.” And I’ve heard about celebrities attending Marine Corps Birthday balls after invitations via YouTube attracted enormous amounts of viral popularity.

This is all alien to me. Growing up in Germany, flagpoles at schools were bare of the national flag and children weren’t taught the national anthem. Patriotism feels like a foreign concept. Ask any German if he loves his country and you will receive uncomfortable silence as an answer.

The right to national pride was thought lost after the end of World War II. Nationalism propelled the Nazis to power. It drove Germany into wars and led to terrible crimes against humanity. Today, any image or icon even vaguely reminiscent of those times, including our armed forces, has been pushed to the margins of society.

Not long ago, wearing a uniform around an average town in Germany could get you beaten up; even today it will draw dirty looks and snide remarks. There are no public messages of support, no kind words in coffee shops, no stickers on cars and no rounds of applause at airports or train stations. During the few times it was unavoidable for me to wear my uniform in public, reactions ranged from being outright ignored to being called a faschistensau — a "fascist pig."

A common joke among soldiers suggests that the only thing militant in Germany is its level of pacifism. German power projection abroad of any sort is usually accompanied by mass demonstrations, public hand-wringing and probing questions about the country’s militarist past.

The Bundeswehr’s involvement in NATO’s mission in Afghanistan is tremendously unpopular with the public: Polling numbers indicate that more than 70 percent of Germans want their country’s troops to withdraw.

And a great deal of discomfort broke out when German soldiers returning from Afghanistan started calling themselves “veterans,” a term that was purged from Germany’s vocabulary after 1945. When Defense Minister Thomas de Maiziere proposed a day of tribute to veterans in 2012, the idea received a rather cold reception from members of parliament and was quickly dropped.

But what Germany lacks in terms of public support and recognition for its veterans, it makes up for in terms of care and assistance. A German private starts with a monthly minimum base salary equivalent to $2,394. Additional benefits and services are available, including free childcare on military bases. On deployment, the danger pay received by Bundeswehr soldiers is much higher than that given to members of the US military. In Afghanistan, for instance, each German soldier receives an additional $137 per day.

If being in harm’s way results in permanent physical or mental injury that reduces his or her capability to work by more than 30 percent, then a German soldier will be guaranteed employment by the Bundeswehr until his or her retirement. When a German soldier transitions from military back to civilian life, a number of programs are in place to make this process as easy as possible.

The Bundeswehr’s vocational training program allows soldiers to receive training in high-demand career fields alongside their duties in the military. The program offers hundreds of courses across a wide range of specialties that enable a soldier to attain certifications while still on active duty. Soldiers can choose whether they want to get an advanced educational degree, complete a trade certification or pursue a vocational qualification.

Members of my unit have gone on to become successful carpenters, motor-mechanics and electricians, or have chosen to pursue university degrees. Upon re-entry to civilian life, a German soldier’s last paycheck includes a one-off, “transition-easing” sum of four to six times his or her last monthly salary. He or she also receives a 75-percent salary for seven months to two years, depending on the individual’s length of service.

Across the pond, circumstances for Americans exiting the armed services are much more dire. Almost 30 percent of veterans say re-entry was difficult for them — a proportion that swells to 44 percent among veterans who served in the 10 years since the Sept. 11 terrorist attacks. Some studies have estimated that every fourth homeless person in America is a veteran, while others have calculated that a U.S. veteran commits suicide every 80 minutes.

340,000 American veterans receive public money for housing. Veterans Affairs programs assist only around 50,000 veterans, leaving the large majority to be covered through various other federal, state and local programs. Other statistics show that 900,000 veterans live on food stamps.

Across the country, Americans in uniform returning home from Iraq and Afghanistan have higher jobless rates than the civilian population. The unemployment rate for new veterans has spiked to its worst levels, nearing 15 percent. For veterans aged between 18 and 24, the jobless rate is a whopping 30 percent, compared with 16 percent nationally for the same age group. Only about half of veterans diagnosed with post-traumatic stress disorder in 2013 received the recommended treatment, making it increasingly difficult for veterans to lead normal lives.

For all the high regard America’s military receives in public, there are too many flaws in the programs meant to provide exiting soldiers with the support they deserve. Germany, on the other hand, for all its shortcomings in publicly acknowledging the men and women who risk their lives abroad, has on some level understood that “supporting the troops” requires more than stickers and concerts.

This story was originally published by War On The Rocks, a digital platform on strategy, defense, and foreign affairs