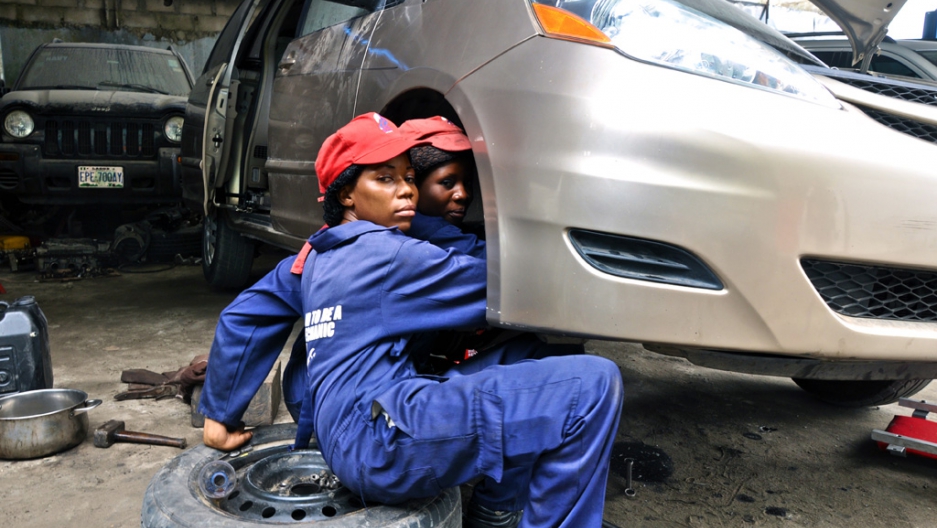 A participant in Nigeria’s Lady Mechanic Initiative, an NGO that aims to empower girls and women with mechanical skills, works on a car at the NGO’s bustling garage on the edge of Lagos.
Credit: Lauren Bohn/The GroundTruth Project
Share

Editor's note: This story is a continuation of a series on global youth unemployment, "Generation TBD," produced by The GroundTruth Project featuring work by 21 reporting fellows in 11 countries. Fellows Lauren Bohn and Chika Oduah reported from Nigeria, which has an estimated youth unemployment rate above 50 percent. Next week they will offer a closer look at the oil-rich, militant-riddled Niger Delta.

ISTANBUL, Turkey and ABUJA, Nigeria — Today’s generation of young people is the largest in the history of the planet.

That’s 1.8 billion people worldwide who are 10 to 24 years old. Owing to fertility rates, the youth population is growing the fastest in the poorest countries, so about nine out of 10 adolescents live in less developed countries, most of them in sub-Saharan Africa.

That global force of shapers and disruptors of our future creates both challenges and opportunities, says a new report by the United Nations. And how well countries accommodate their youth populations will be the bellwether for success or failure.

The report charts the numerous challenges behind the numbers. For one, youth unemployment has continued to grow dangerously since 2011. Up to 60 percent of young people in developing regions are not working or in school.

More than 500 million of them survive on less than $2 per day with little means to rise out of their situation. According to the report, the World Bank estimates that to maintain 2005 levels of employment in sub-Saharan Africa, there needs to be a 50 percent increase in the number of jobs annually.

Those challenges were at the heart of The GroundTruth Project’s “Generation TBD,” a year-long reporting project that featured 21 fellows reporting in 11 countries on the causes of and possible solutions to a global youth unemployment crisis.

But as both the UN report and GroundTruth's reporting emphasize, those numbers don’t necessarily mandate a grim future.

One of the possibilities the report focuses on is the “demographic dividend” that investing in youth can reap, reducing poverty and raising the quality of life.

If countries in sub-Saharan Africa invest strategically and intelligently in human capital, the report says, the combined demographic dividends could be at least $500 billion per year (which is equal to one third of the region’s current GDP) for up to 30 years. But those investments require political will and smart policy decisions — deficits in many imperiled countries.

Kollodge says one of the most alarming aspects of the youth bulge is that in many countries young people aren’t allowed to exercise their rights.

“The rights discussion is often overlooked, but young people need a voice…they need to be involved,” he says. “It’s a fundamental that can’t be ignored in this conversation.”

This year, as part of The GroundTruth fellowship, colleague Chika Oduah and I reported across Nigeria, focusing on how its youth are struggling to amplify their voices in that conversation.

Nigeria, the most populous country in Africa and the continent's largest economy, has been rocked by the militant Islamist group Boko Haram, who kidnapped 300 girls last April, igniting the impassioned celebrity-endorsed "Bring Back Our Girls" campaign. But we focused on the elephant in the room — an even larger enemy that Nigeria's government has failed to confront: devastating levels of unemployment.

While Boko Haram continues to dominate global coverage on Nigeria, most young Nigerians we spoke with said an acute lack of opportunities, amid a culture of government corruption and growing economic disparity, looms larger in their day-to-day lives than the perils of the Islamist insurgency.

As I wrote last month, for many, Nigeria's staggering unemployment rate and inescapable cycle of poverty has meant a life of crime and violence. For others, like 24-year-old entrepreneur Tayo Olufuwa, necessity is the mother of invention, and entrepreneurs are working to fill in the gaping holes the state has long ignored.

"I just realized I could do something with my life," Olufuwa said, adjusting his black-rimmed glasses while explaining his business venture that connects young Nigerians with jobs. "[I realized that] I could create solutions…other young people need to be given that opportunity.”

The UN report focuses on Nigeria as one of the countries that could reap significant benefits from an economic dividend if that happened:

“In 1960, Nigeria and Indonesia had the same fertility rates and similar age demographics. But Indonesia’s fertility rate began to decline and Nigeria’s did not…Nigeria went from a GDP per capita slightly higher than Indonesia in 1960 to half the GFP per capita of Indonesia today.”

If Nigeria invests more in social and human capital, the report predicts it could raise its GDP by two percentage points and lift 2.3 million people out of poverty. What’s more, a slight decline in fertility would raise output per capita by 5.6 percent in 20 years.

The report highlights how some Nigerian governmental initiatives are investing in the country’s youth through gender equity programs. The government has also thrown some weight behind entrepreneurship programs like YouWiN, a federal business plan competition for young entrepreneurs.

But as we explained in our first story, it takes more than just one-off programs.

“The Nigerian government has to do more than merely champion entrepreneurship on paper or at a ribbon cutting ceremony,” said Elmira Bayrasli, author of the upcoming book “Steve Jobs Lives in Pakistan: Extraordinary Entrepreneurs in the Developing World.”

“It must strengthen the rule of law, improve infrastructure, clamp down on corruption, increase transparency, and pour resources into education.”

Until then, such programs are mere window dressings for a rusty pipeline, says Hamzat Lawal, a 24-year-old Abuja-based social entrepreneur who has led campaigns like Follow the Money, an initiative that works to expose corruption of the government.

“Seventy percent of the time I blame unemployment on the government,” he said. “But we also have to blame ourselves, because we’re the ones empowering these politicians through our votes, through accepting the status quo.”

Last March, that status quo seemed to have finally curdled. A half-million people flocked to recruitment centers across the country to apply for fewer than 5,000 government positions. Pandemonium ensued and at least 16 Nigerians were killed in stampedes. Hundreds were injured. The country’s unemployment issue had literally turned deadly, with the government largely watching from the stands.

It seemed to be a turning point for a country whose vast oil wealth belies brutal inequities and a systemic series of “No’s.”

Instead, it was a mere ellipsis, skipping over a teachable moment and leading the generation closer to the brink of hopelessness.