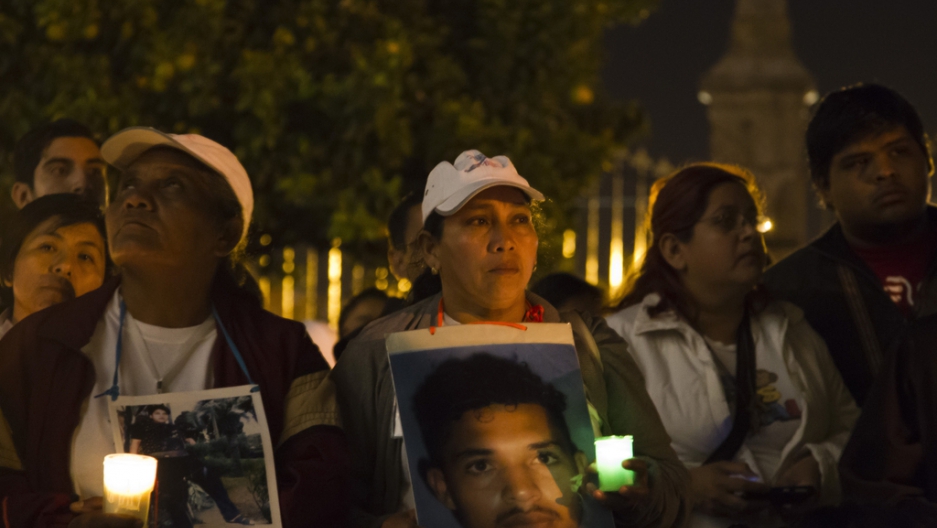 Members of a group of at least 40 Central American women travelling in caravan across Mexico in search of missing migrant relatives stand on the outskirts of the Zapopan Church in Guadalajara, Jalisco State, Mexico, on Nov. 26, 2014
Share

Update: This week Argentine forensic experts in the investigation said the Mexican government “had no scientific evidence” to declare the 43 disappeared students was a closed case. Mexico’s justice minister last month had claimed gangsters killed the students, burned their bodies and dumped them in a river. Family members of the students continue to raise doubts about the official version.

MEXICO CITY — The disappearance of 43 Mexican students after they were abducted by corrupt police working with drug cartel gunmen shocked the world for the scale and severity of the crime. But the atrocity is only one part of a much larger tragedy of people going missing in Mexico.

Since 2006, when then President Felipe Calderon launched a military offensive against drug cartels, more than 22,000 people across the country have disappeared, creating a veritable humanitarian catastrophe. The grave problem has continued under President Enrique Peña Nieto, despite his attempt to shift focus from the drug war to economic reforms.

This infographic breaks the crisis down to some key statistics:

The missing can vanish for various reasons. Sometimes, criminal cartels murder victims and dissolve the bodies in acid or bury them in mass graves. In other cases, gangs kidnap victims for ransom but end up disposing of the hostages. In others, cartels have been found to force victims to work for them, sometimes as gunmen, or they use abducted women as sex slaves.

Investigators have found Mexican police officers and soldiers at all levels to have links to cartels. In the case of the 43 teacher trainees who went missing Sept. 26 from the southwestern city of Iguala, prosecutors say local police, gangsters and even the town’s mayor were involved.

Those 43 students were among 107 people who've gone missing in 2014 in the southern state of Guerrero. This heatmap shows which of Mexico's 31 states have suffered the most kidnappings.

These infographics are based on government statistics, but the exact number of disappeared is difficult to trace. Some cases are not reported. The figures may also include runaway children or spouses. However, it is clear that the criminal groups are involved in thousands of cases, often alongside police or military.

Disappearances psychologically destroy families who have no closure in what happened to their loved ones. Irma Leticia Hidalgo watched her son Roy Rivera, then an 18-year-old philosophy student, get dragged away by gunmen from their home in Monterrey in 2011 and has not found out what happened to him.

“They don’t know how much harm they do,” she said. “My younger son, my father, my husband, we are all seeing psychiatrists and are on medication to cope with the trauma. My parents are hoping not to die before we find Roy. We spend all our time searching for him.”