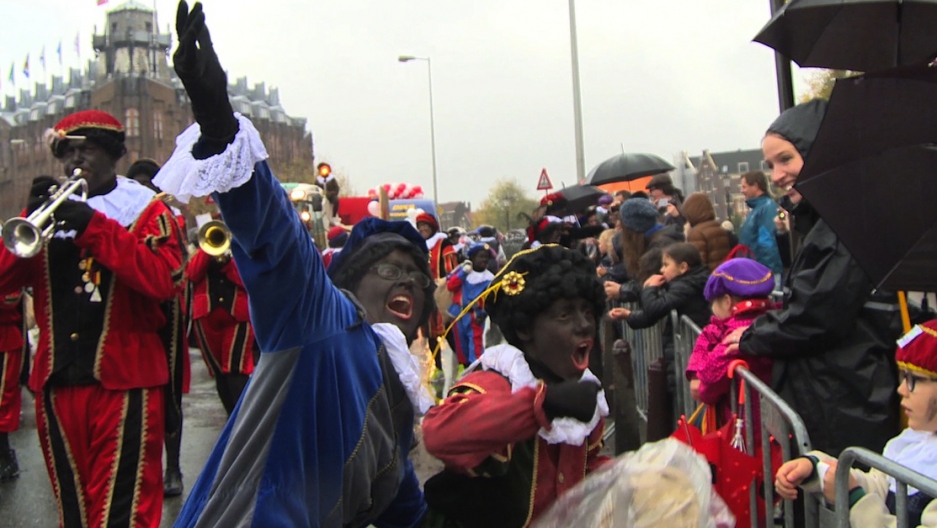 Dutch polls found that as much as 91 percent of the population thinks 'Black Pete' should stick around.
Credit: Suzanna Koster
Share

Editor's note: This article was originally published in December 2014.

AMSTERDAM, The Netherlands — The Dutch holiday season has one very weird — and to some people, racist — tradition. His name is Black Pete, and, love him or hate him, you'll see him everywhere you go right now in the Netherlands.

Black Pete, or "Zwarte Piet" in Dutch, is the star of the annual feast of St. Nicholas ("Sinterklaas"). Every year in the weeks leading up to St. Nicholas Eve ("Sinterklaasavond") on Dec. 5, Black Petes — thought of as St. Nick's sidekicks, played most often by white Dutch people in blackface — parade through towns across the Netherlands, spreading merriment, giving presents, and unintentionally reenacting a history of racism, colonialism, and slavery. It's, ya know, a tradition.

Similar legacies gave the United States its own performative traditions: blackface minstrelsy, characters like Sambo and Zip Coon, and a collection of black stereotypes still very much alive in America (see recent events in Ferguson, Mo., and reaction to them).

Americans, still struggling with blindness to structural racism and racist discourse, have more or less agreed that blackface is one tradition, like slavery, that's not worth preserving.

But that's not what you hear in the Netherlands when you ask people about the tradition of Black Pete. Dutch polls found that as much as 91 percent of the population thinks he's worth preserving.

Suzanna Koster, from the Netherlands herself, explored the story for GlobalPost in Amsterdam. Her video shows how debates over Black Pete are bringing up race and identity issues many Dutch people didn't think they had:

Debates over Black Pete are debates about tradition — what it is, how it evolves or should evolve, what it means. One thing is for sure: it's hard to change something somebody else calls a tradition.

As far as actual history goes, Black Pete joined a much older tradition — Europeans have been celebrating St. Nicholas since the middle ages — sometime after 1850, when he first appeared in a children's book by Jan Schenkman called "St. Nicholas and his servant" ("St. Nikolaas en zijn knecht"). As you can probably guess, the servant was Black Pete.

The Netherlands was still in the business of colonizing and enslaving brown and black people, even though its global empire had been eclipsed by Britain and France. The Dutch wouldn't abolish slavery in its colonies of Surinam and the Antilles until 1863, and it held onto the Gold Coast of Africa, the seat of the Dutch slave trade in the 18th century, until 1870. Surinam didn't achieve full independence until 1975, and while the Netherlands technically dissolved the Dutch Antilles in 2010, several islands remain part of the Kingdom of the Netherlands.

And yet there are those who insist the tradition of Black Pete has nothing to do with race.

GlobalPost's Koster spoke to Alex Rüter, spokesperson for Pro Zwarte Pete, a group that advocates for keeping the blackface tradition.

"He's black because he came through the chimney," he said, a widely-made claim that doesn't account for Pete's stereotypically large red lips, his Afro, the total lack of soot on his clothing, and the fact that Black Pete performers once spoke with a Surinamese accent.

"Black Pete is black and that's a tradition. We've always celebrated it like this and it should stay this way. ... If I look at the history, Sinterklaas bought the slaves and set them free. He offered them work and they voluntarily accepted it. [Opponents] just connect it to racism. They make it personal."

But it's getting harder to make this argument as opponents speak out and organize into groups like Zwarte Piet is Racism, founded in 2011.

Of the nearly 17 million people in the Netherlands, about 79 percent are ethnically Dutch, according to national data. Ten percent of the population has a "non-Western foreign background," says the Dutch bureau of statistics. Many ethnic minorities in the Netherlands are migrants from elsewhere in Europe as well as North Africa and Asia.

Most opponents aren't saying Black Pete needs to disappear from Sinterklaas festivities. They just want to give Pete a makeover and the Dutch people a history lesson. People have in recent years showed up to parades dressed as a yellow-faced "Cheese Pete" and multicolored "Rainbow Petes." There have been blue "Flower Petes" and even "Stroopwafel Petes," after the national "syrup waffle" cookie.

"We are in favor of a character who has been stripped of all its racial added characteristics," said Roelof Jan Minneboo, historian and founder of Facebook group Zwarte Piet is Racism. (There is at least one other group, a smaller one, that goes by the same name.) "So no more wig, no more full black face and no red lips, but just someone whose face looks like [it's covered in] chimney soot."

It's going to be hard to convince 91 percent of the population that Black Pete is racist and need to change. Protests this year suggest that progress is being made but there's a lot left to do, and education is the key.

"We still do not acknowledge the fact that we share a history of colonialism and slavery," Minneboo said. He explains:

"Factually [school teachings on the Dutch colonial past] are not wrong, but there’s more emphasis on the abolition than there is on the fact of slavery. If you ask an average Dutch person to tell you one detail about lives of slaves in the Dutch colony they won’t be able to give an answer. They will say there was slavery but we abolished this in 1863. But no one knows anything else about that. We tend to shy away from the darker pages of history. We still call a colonial war which we fought in Indonesia ‘police actions.'"

Debates over Black Pete are forcing Dutch people to reckon with their history, and that's good news, because Dutch racism isn't confined to the past.

There's blatant racism among some of the fiercest defenders of Black Pete, like the right-wing, anti-immigrant Freedom Party, which has tried to pass a law that would make it illegal to change Black Pete's appearance.

There are also systemic inequalities that Dutch people, accustomed to imagining themselves as progressive and tolerant, are less likely to perceive. Black Pete helps sustain that form of de-personalized racism, said one anti-Black Pete organizer, Anousha Nzume, who noted racial disparities in employment, education, and opportunity.

"My dream is that people make the connection," she told GlobalPost. "That they realize there is a connection between how we view people and how we perpetuate the stereotype yearly."

Suzanna Koster contributed reporting for this story from Amsterdam.