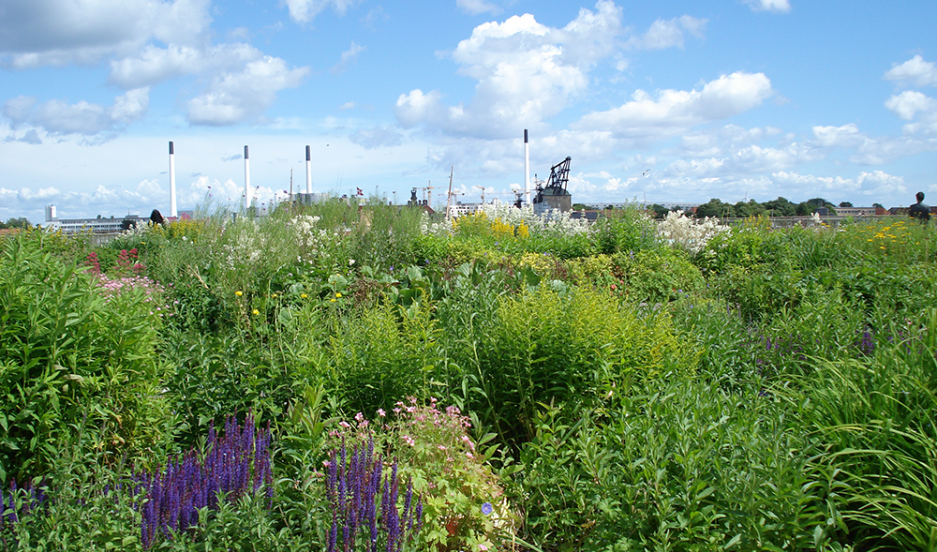 Gardens blanket the roofs of shops in Copenhagen.

The roof of the new Danish National Archive, near Copenhagen’s inner harbor, is about the size of a football field — but it looks for all the world like a meadow.

There are vetch, thyme, thrift and nodding grasses, interspersed with strawberry beds, walking paths and benches bordered by trellises clad in purple clematis. A bike path weaves its way across the roof. In one corner, a group of office workers are having a barbecue. Further along, the ramps that lead down to street level are a magnet for local skateboarders.

Green roofs like these have been mandatory on suitable new buildings in Copenhagen since 2010. There are oases of green on houses, hotels, city buildings, parking garages — even on bicycle and storage sheds. The roof of a development of shops and cafes is covered with flowerbeds, benches and walkways, but no gutters: a three-foot-wide bed of stonecrop and sedum along the edge takes up all the rain.

They're a big part of why Copenhagen, the capital of Denmark, keeps winning green awards. The EU officially declared it the EU's greenest city in 2014.

Urban planners tout the benefits of installing plants on rooftops as insulation, and as an antidote to urban "heat islands." That's not a problem you'd expect in a place that's on roughly the same latitude as Moscow and Goose Bay in northern Canada. But Dorthe Rømø, a consultant to the city's Department of Planning and Climate Adaptation, says Copenhagen must plan for a different future.

“Due to climate change, we expect there will come higher temperatures in our city,” she says. “We know we will have more intensive rains, and more rain in general... [W]e know that green roofs and green areas can absorb, infiltrate, evaporate and delay the rainwater.”

Rømø says they provide other important benefits, too, like creating habitats to support biodiversity. Butterflies, bees, birds and invertebrates and a wide diversity of plants — all are thriving on the rooftop gardens. Visitors to the city, familiar with the global problem of bee colony collapse, marvel at the abundance of bees among the vegetation.

Copenhagen intends to have half its citizens getting to work or school or running errands by bicycle by 2015, and to generate all its power from renewable sources by 2040. Rømø says the city is on track to meet those goals: 40 percent of its energy is already green.

It's too soon to know what impact the green roofs will have on the carbon balance, but Rømø is sure they affect the citizen's balance and their well-being. “We like to have the view of some beautiful areas, but, in fact, you can also create these beautiful areas,” she says. “I have also heard from people that they are surprised at being in a silent area even though they are in the middle of a city.”

This article is based on a story reported by Helen Palmer for PRI's Living on Earth with Steve Curwood.