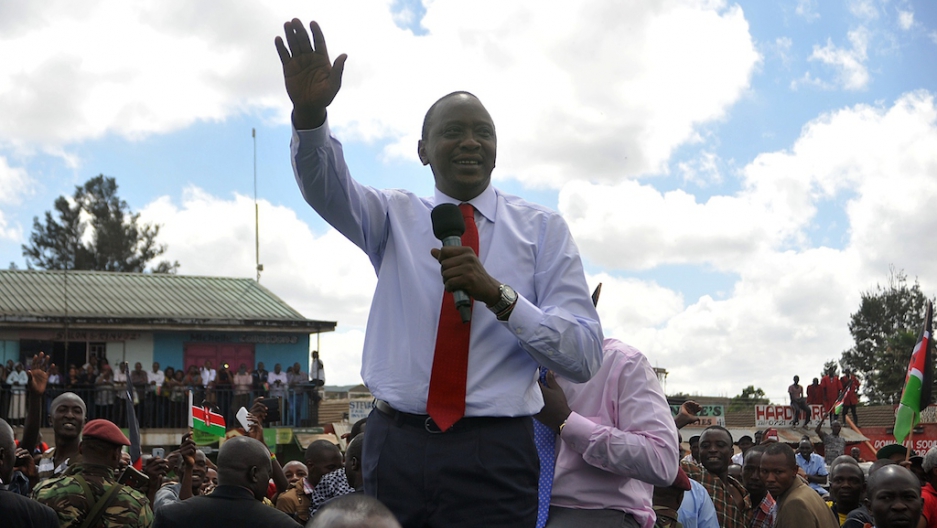 Kenya's president Uhuru Kenyatta addresses a welcoming crowd after arriving in Nairobi on October 9, 2014, a day after appearing before the International Criminal Court on crimes against humanity charges, becoming the first sitting president to do so.
Credit: Simon Maina
Share

NAIROBI, Kenya — Prosecutors at the International Criminal Court have dropped all charges against Kenya’s president Uhuru Kenyatta, who had been accused of crimes against humanity after violence engulfed the country following elections in 2007.

"The Prosecution withdraws the charges against Mr Kenyatta," read a notice issued by Chief Prosecutor Fatou Bensouda on Friday.

The decision had been expected after judges rejected a request by the prosecution for a further deferral of a case that has already dragged on for years with little progress made.

On Wednesday judges at the court in The Hague directed the prosecution to decide, within a week, whether to withdraw charges or proceed to trial.

"Unless the evidentiary base has now improved to a degree which would enable the trial to proceed, [the trial judges] considered the appropriate course of action to be a withdrawal of charges by the Prosecution," said the ruling.

Kenya’s government has been widely criticized for "non-cooperation" and stymieing attempts to put the Head of State on trial. In their ruling this week the ICC judges agreed that Kenya “had not met the standard of good faith cooperation required” but decided any punitive action would not further the interests of justice.

Kenyatta has always maintained his innocence and will welcome his exoneration. Within minutes of the decision being made public Twitter lit up with congratulatory messages and 140-character cheers from his supporters.

Those not cheering were the victims of the post-election violence of late 2007 and early 2008. Over 1,100 people died and hundreds of thousands were forced from their homes and lost property in politically motivated tribal violence that tore through Kenya in the wake of a disputed election.

For them justice has never come, nor looked more distant. "The victims’ quest for justice has been cruelly frustrated, both in Kenya and at the ICC," said victims’ lawyer Fergal Gaynor.

The ICC is weakened by the collapse of this, its first case against a sitting head of one of its member states. The world court was established to bring to justice those who are otherwise above or beyond justice. In accusing Kenyatta and then failing to prosecute him the court has shown itself incapable of performing this function.

There may be repercussions for Kenya’s domestic politics too. The ruling Jubilee Coalition was hammered together by Kenyatta and his deputy William Ruto in the run up to the 2013 elections. The two men had been on opposing sides in the violence of nearly seven years ago and were both accused of crimes against humanity at the ICC.

But while Kenyatta’s case has collapsed, Ruto remains in the dock, raising questions about how long their alliance can survive.