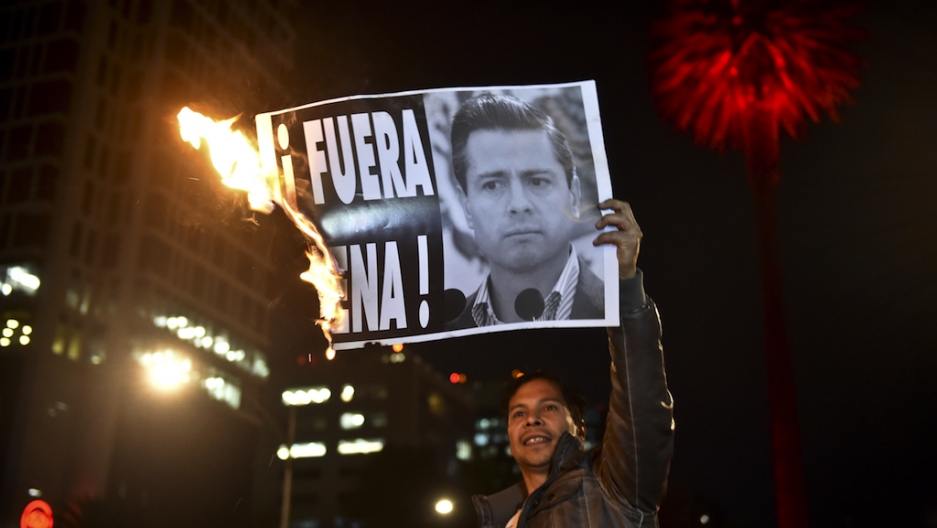 MEXICO CITY — In this mountain capital, tens of thousands marched downtown, with a few hundred smashing the windows of banks and shops. In southern Oaxaca state, protesters blockaded the entrance to an oil refinery. In Ciudad Juarez, demonstrators took over a cross-border bridge, letting cars enter from the United States toll free. In Guerrero state, rioters burned four police cars.

This all happened on Monday. But almost every day, citizens take to the streets somewhere in Mexico, from gatherings with a few hundred to mass marches with more than a hundred thousand.

Mexico's biggest protests in years began two months ago in response to the Sept. 26 attack on students by corrupt police and drug cartel gunmen. Demands have widened to include the resignation of President Enrique Peña Nieto. Protesters also rage against pervasive corruption, violence and disappearances suffered during years of narco bloodshed. The movement has even led to solidarity rallies in the United States.

Political analysts are trying to figure out what the movement represents and where it could lead.

Some are comparing it with “Occupy” in the United States and the “Indignados” (the outraged) in Spain: Fed-up Mexicans are spreading their messages using social media and have few visible leaders.

“This is part of a wave of protests that has spread through Europe and the Middle East, hit Brazil and is coming through the Americas,” says political scientist Raul Benitez. “It is also similar in some ways to the Ferguson protests in the United States.”

Others see the movement — which has no clear name yet (see hashtags below) — as part of the cycle of uprisings and upheavals the country has gone through periodically since winning independence from Spain almost two centuries ago.

One of these outbursts took place in 1968, when a student-led movement took to the streets to challenge one-party rule by the Institutional Revolutionary Party, or PRI. The government responded by sending out soldiers to shoot dead the protesters, culminating in the notorious Tlatelolco massacre. The movement was a key stepping stone toward multiparty rule here, historians say, even though PRI held the presidency for a lengthy 71 straight years.

“Today’s protests are the most important since 1968 and they might become bigger still,” says politics professor Maria Eugenia Valdez, who participated in the ’60s protests as a student. “The temperature is very high in Mexico right now.”

More from GlobalPost: 43 haunting portraits of Mexico's missing students, who are still waiting for justice

Some analysts have also made the comparison between the 1968 Tlatelolco massacre and the attack on students in the southwestern Mexican city of Iguala. In Tlatelolco, soldiers killed 44 student protesters, according to official numbers, although some rights groups claim it was many more. In Iguala, the police and cartel gunmen kidnapped 43 students as well as shooting dead three more and three passersby.

“There are very obvious similarities,” academic and human rights activist Sergio Aguayo says in a commentary on YouTube. “They were both barbarous criminal acts in which agents of the state were involved.”

Both attacks also took place under PRI presidents, with Peña Nieto bringing the party back to power in 2012 after 12 years in the wilderness.

However, while the central government likely sanctioned the 1968 Tlatelolco massacre, Peña Nieto’s government blames the Iguala attacks on rogue police officers working with a drug cartel.

In response to the Iguala violence, Mexican federal agents have arrested more than 70 people, including the city mayor. Detainees confessed they murdered the 43 kidnapped students and burned their bodies. However, the victims’ families are refusing to accept this explanation without more evidence, and are demanding the students be found.

“Alive they took them, and alive they we want them,” protesters chant.

Such a mandate could be impossible for Peña Nieto to fulfill, putting him in a difficult position and prolonging protests.

Nevertheless, under the pressure, federal agents carry on sifting through mines, forests and mass graves searching for the students.

“Mexico cannot continue like this. After Iguala, Mexico has to change.”

The president has also promised a package of new security measures, including the biggest police overhaul in decades, to try to stop narco corruption.

“Mexico cannot continue like this,” Peña Nieto said last Thursday, trying to regain his footing as his approval ratings fell to his lowest yet. “After Iguala, Mexico has to change.”

However, many protesters are calling for this change to start with the head of state, holding up banners with the slogan “Fuera Peña Nieto” or “Peña Nieto out.”

“Peña Nieto has to go,” says Bernardo Hernandez, a 23-year-old engineering student who marched Monday. “We have had enough of these corrupt puppets. It is time that we put in politicians who have a basic level of honesty and respond to what we want.”

Movements to topple presidents also characterized the protests in the Arab Spring.

But in contrast to blatant dictators like Muammar Gaddafi of Libya and Hosni Mubarak of Egypt, Peña Nieto won power by election. While his electoral rival Andres Manuel Lopez Obrador accused Peña Nieto of vote buying, Mexico’s electoral court upheld the result, which governments across the world recognized.

What’s more, protesters are not suggesting any alternative to the current leader. They pour scorn on politicians of all stripes, including the leftist opposition Democratic Revolution Party, of which the former Iguala mayor was a member. A well-known leftist politician, Cuauhtemoc Cardenas, attended one march and demonstrators hurled bottles at him.

“Getting rid of Peña Nieto is not going to happen. It is not a realistic demand,” says the political analyst Benitez. “No Mexican president has been forced out since 1934.”

Another possibility is for protests to become increasingly confrontational while Peña Nieto serves out his remaining four years in office. So far, despite media spotlights on some demonstrators throwing firebombs and smashing windows, the vast majority of protesters have been peaceful.

“I see these protests as the beginning of a social movement that will lead to gradual and peaceful change,” Valdez says. “But I think the change will come through the electoral system. I don’t see any alternative. People have learned from the past. After years of disappeared and killed, they don’t want a war now.”

So many protests, so many hashtags

#TodosSomosAyotzinapa — WeAreAllAyotzinapa, referring to the teacher training college where the Iguala kidnap victims studied. The simpler hashtag #Ayotzinapa is often used too.

#YaMeCanse — The phrase can mean "I’m tired" or "I’ve had enough." It refers to comments by Mexico’s attorney general to reporters about the case of the missing students. Protesters have appropriated the phrase to say they’re the ones who’ve had enough of corruption and lack of justice. The hashtag sometimes appears with an accent mark as #YaMeCansé. And on Thursday, Twitter users added a number to the end to begin to count the missing: #YaMeCanse2 was Mexico’s top hashtag at the time of writing.