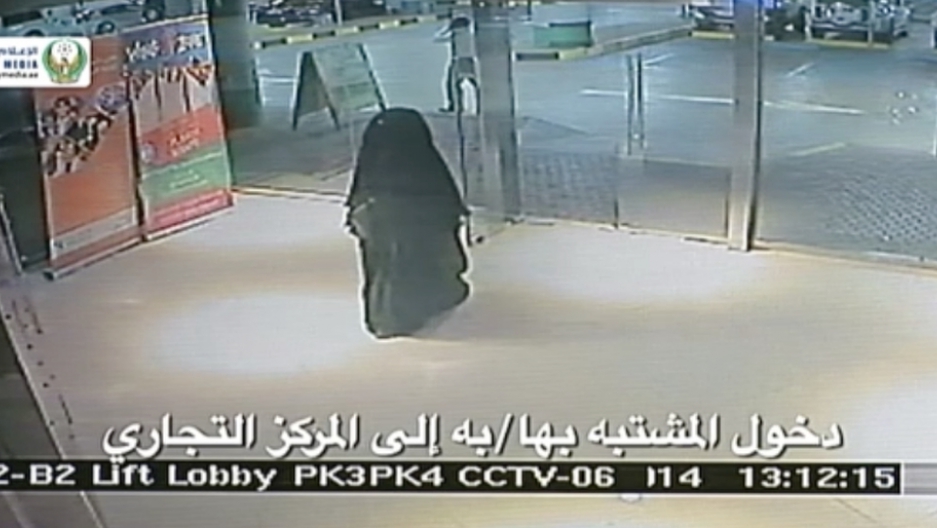 UPDATE: Abu Dhabi police have arrested a woman over the horrifying stabbing murder of an American school teacher in the restroom of a shopping mall on Monday.

The suspect confessed to murdering 47-year-old Ibolya Ryan at the Boutik Mall and to planting a bomb outside the home of an American doctor, Interior Minister Saif bin Zayed Al Nahyan said Thursday.

He said the victims were targeted because of their nationality and the aim was to create chaos. The bomb was discovered and dismantled before it went off.

This person is the prime suspect in a horrifying murder of an American school teacher in the public toilet of a shopping center in Abu Dhabi on Monday.

The mother of twins was stabbed to death in the upmarket Boutik Mall on Reem Island following a fight with the suspect, whose identity and gender are not known.

CCTV surveillance footage released by police shows the suspect, covered from head-to-toe in a black robe, gloves and veil worn by many women in the region, entering the lobby of the mall at 1:12 p.m. local time, according to the timestamp on the video.

Moments later the suspect is seen exiting the elevator. After talking to a security guard, the suspect picks up a newspaper from a stack next to the elevators and heads towards the restrooms.

Ninety minutes later the suspect is seen rushing back to the same elevators as apparently frightened shoppers disperse. A woman standing nearby appears to try to stop the suspect from escaping, but she suddenly backs away. The elevator doors open and the suspect disappears. A man attempts to stop the elevator, but is too late.

Seconds later the suspect is seen fleeing the building the same way they entered.

Some time during that hour-and-a-half period, the American woman, whose name hasn’t been released, was fatally stabbed.

"The injured woman was immediately rushed to Sheikh Khalifa Medical City where she succumbed to the wounds she sustained in the attack," Abu Dhabi police said in a statement.

The Ministry of Interior has called on anyone with information about the suspect, dubbed the Reem Island Ghost, to come forward.

The Ministry of Interior urged the public to call 8002626 to provide any information related to the case. http://t.co/6NxPYHn6vM

The motive for the brutal attack isn’t clear, but US embassies in the region warned in October of an anonymous posting on a jihadist website urging attacks against teachers at American and other international schools.

Monday's attack also came on the same day as a recording, believed to have been made by Islamic State spokesman Abu Mohammed al-Adnani, encouraging Muslims to attack Westerners.

There have been a number of attacks on foreigners in the region in recent weeks.

A Canadian national was stabbed and wounded in a mall in Dhahran, Saudi Arabia, on Saturday.

And IS supporters this week claimed responsibility for the shooting of a Danish citizen in the Saudi capital Riyadh on Nov. 22.