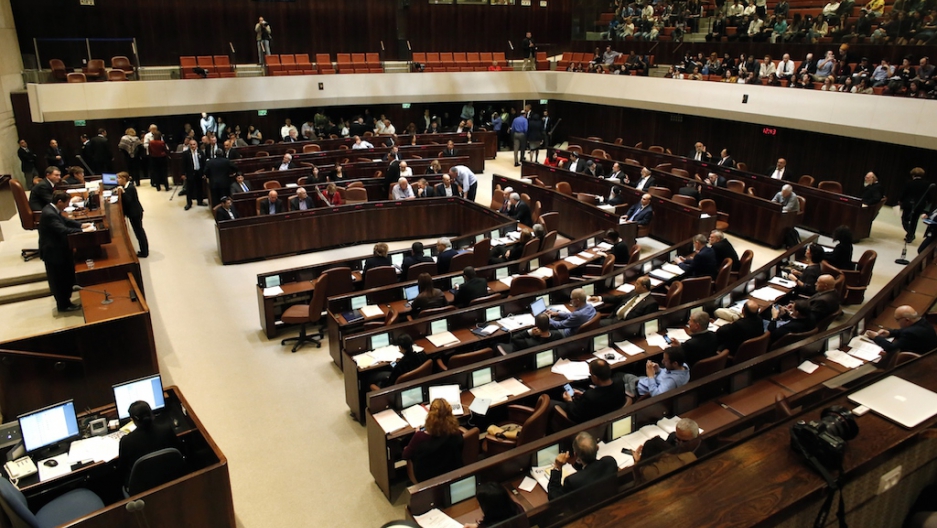 General view of the Knesset is seen during the vote to dissolve the parliament on December 3, 2014 in Jerusalem.
Credit: Thomas Coex
Share

UPDATE: The Israeli government voted unanimously on Monday to dissolve parliament and hold new nationwide elections in March, two years ahead of schedule.

TEL AVIV, Israel — The Israeli government is teetering on the brink of collapse, its legislative body almost certain to be dissolved within days, and the catalyst is a largely symbolic draft law that few understand — and which may never actually pass.

Ministers spent four hours last week holding a stormy debate on a bill declaring Israel the "nation-state of the Jewish people." The session was closed to the press, but lawmakers could be heard through the closed door shouting and banging on tables. They eventually approved it, 15-6, with all of the "no" votes coming from center-left members of Prime Minister Benjamin Netanyahu’s ungainly coalition.

His government has been in crisis for months, after a protracted budget battle and a series of other incidents. But the "Jewish state" bill was a tipping point: It drew sharp criticism from Finance Minister Yair Lapid and Justice Minister Tzipi Livni.

The cabinet’s approval last week meant that the bill would reach the full Knesset (Israel's parliament) with the endorsement of the government. Ministers were not given freedom to vote according to their conscience — so Lapid and Livni could not vote against it and remain in the coalition.

After a week of public bickering, Netanyahu decided to blow up his government, less than halfway through its four-year term. He sacked Lapid and Livni on Tuesday night, and called for early elections "as soon as possible." The next day, lawmakers scheduled them for March 17.

Here’s everything you need to know about the controversial bill and the impacts it could have.

It came from the right

Economy Minister and head of the far-right Jewish Home party Naftali Bennett listens to the debate during the vote to dissolve the Knesset on Dec. 3, 2014 in Jerusalem.

The bill is actually three bills, one drafted by Netanyahu, the other two by right-wing members of his governing coalition. The cabinet approved a vague "statement of principles" that asks the Knesset to merge the various drafts.

All three share a number of banal provisions, like affirming the national anthem and the design of the flag. More substantively, they also specify that Jewish law shall be "a source of inspiration" for the Knesset, and that Jews will retain the right to immigrate to Israel and receive automatic citizenship.

These points are not particularly objectionable for centrist politicians, but the right-wing bills include a few items that are.

In the prime minister's bill, Israel is defined as a "Jewish and democratic state," whereas in the right-wing bills it uses the more limited definition of Israel having a “democratic form of government."

One of them also demotes Arabic from its status as an official language, reducing it to a language with a "special standing," an ill-defined term. The bill also includes a measure that seems to encourage Israel to expand its illegal settlement enterprise.

Many fear it will alienate Israel’s minorities

Much of the criticism has been directed at the right-wing bills, rather than Netanyahu’s version. Lapid, for example, said in a speech last week that the proposals put "the Jewish state before democracy," a clear reference to the more strident drafts. Livni has similar reservations.

But Lapid also expressed concern that it would alienate minorities, citing the example of Zidan Seif, a Druze police officer killed last month while responding to the scene of a synagogue attack in Jerusalem.

"What can we say to the [Seif] family now? That we are passing a law that would turn them into second-class citizens?" he asked.

Palestinian citizens of Israel — who make up around 20 percent of the country’s population — oppose the bill for the same reason. Ahmad Tibi, from the Ta’al party, said it would cement Israel’s identity as "officially an ethnocentric country that persecutes its minority."

Criticism has also come from less likely sources. Reuven Rivlin, the Israeli president, dismissed the bill as a political stunt. "What is the point of the proposed law?" he asked last week. "Does this proposal, not in fact encourage us to seek contradiction between the Jewish and democratic characters of the state?"

Rivlin is generally considered a right-wing figure, a staunch opponent of the two-state solution. But he has made coexistence between Jews and Palestinians the main focus of his short term in office, which could explain some of his criticism.

Prime Minister Benjamin Netanyahu listens to an adviser during the vote to dissolve the Knesset on Dec. 3, 2014 in Jerusalem.

Netanyahu first proposed a "Jewish state" law in May, but the war in Gaza largely overshadowed the Knesset’s summer session.

The bill did not seem like a top priority when lawmakers reconvened in October; all eyes were focused on the budget. Netanyahu hastily brought the bill to a cabinet vote, though, over the objections of Livni, who tried to block the legislation.

He did this in part to burnish his credentials with an increasingly right-wing electorate. Analysts have been talking for months about early elections, as Netanyahu’s bizarre coalition of far-right and center-left parties seemed to be fraying.

The prime minister is under growing pressure from the right wing of his own Likud, and from Bennett, the head of the national-religious Jewish Home party.

But he was also looking for a way out of his unworkable political predicament. Rumors have been swirling for weeks that Lapid and Isaac Herzog, the Labor party chief, were trying to cobble together an alternative coalition of center-left and ultra-Orthodox parties. Netanyahu saw this as a looming coup, and wanted to preempt it.

"They were merely the excuse for dissolving this Knesset. No one in Israel knows what this law is about," said Amit Segal, a political analyst for Israel’s Channel 2. "Netanyahu was the prime minister for six years, and he never took a step to promote these laws, so one can infer that this was merely an excuse for dissolving the Knesset."

Centrist Israeli ministers Justice Tzipi Livni and Finance Yair Lapid (L) chat during the vote to dissolve the Knesset on Dec.r 3, 2014 in Jerusalem.

So the bill probably will not be approved by the current Knesset, nor will anything else.

Netanyahu and Lapid met on Monday night in what was described as a last-ditch effort to save the coalition. Both men said the meeting was a disaster. The prime minister demanded that Lapid support the bill on Wednesday, and that he drop his plan to exempt first-time homebuyers from paying tax, his signature economic initiative.

He refused, and both men spent Tuesday sniping at each other, with Lapid accusing the prime minister of "acting irresponsibly." Netanyahu fired him that night, and in an angry and defensive press conference accused Lapid (and Livni) of insubordination, bad policymaking, even plotting a “putsch.”

The Knesset voted on Wednesday 84-0 to approve a no-confidence motion. A second and third vote on the measure will follow next week, which could mean dissolving the parliament as early as Monday, with elections to follow in March.