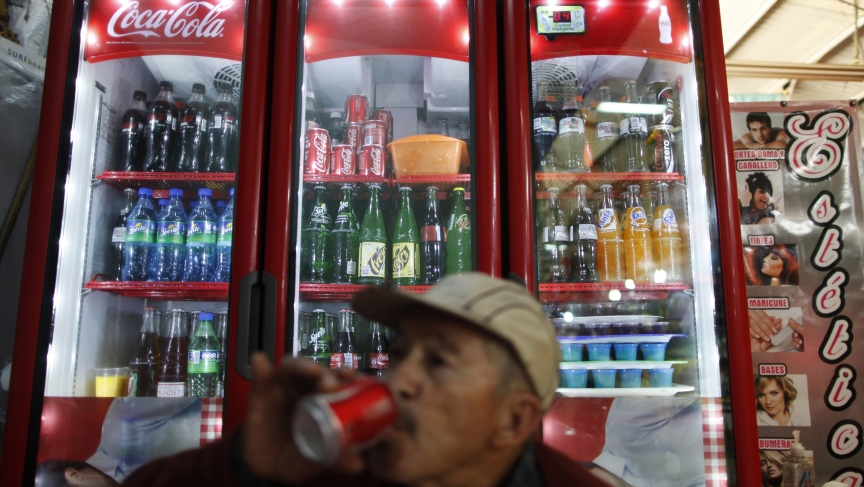 A man drinks a soft drink at a store in Mexico City. Last year, the Mexican government imposed a 1 peso per liter tax on soda and sugary drinks to combat obesity.

At Mexico’s biggest family medicine clinic in Tijuana, workers and their families come in when they have a cold or joint pain — and increasingly when they have symptoms of diabetes.

“That's basically one of the critical diseases we have here,” says the clinic director, Alonso Perez. “Obesity and diabetes are rising, their complications are rising, and every day it's from younger patients.”

Thirty percent of school children in Mexico and about 70 percent of the nation's adults are obese or overweight, pretty close to the rates in the US. In fact, in recent years, Mexico has competed with the US for the dubious title of fattest country in the world. Nearly 13 percent of Mexico’s population has diabetes, which is closely linked to obesity.

“When you find out you’re diabetic, it feels like your world falls apart,” says Armando Huerta, who was diagnosed two years ago. He’s come to the clinic to get weighed and have his blood glucose levels checked. “I used to eat a lot of fried stuff, chicharrones, a lot of tortillas, mole.”

And always with soda; any kind of soda.

“We Mexicans say it helps you burp and feel better,” Huerta says.

Armando Huerta, who was diagnosed with Type 2 diabetes two years ago, says he's cut out soda and fried foods.

He says these days, he eats healthier food — and no more soda. He’s lost weight and has his diabetes under control. But he struggles to get his three kids on board with the new diet.

The country’s struggling with it too.

In hopes of stemming what’s become a public health crisis, Mexico is doing something the city of Berkeley in California just did last month: it imposed a soda tax. Last year, Mexico slapped a one peso (about seven cents) per liter tax on soda and other sugary drinks. It also added an eight percent tax on high-calorie snacks, like potato chips and cookies.

Revenue from the tax is supposed to support water fountains in public schools, though public health advocates say that the program has been slow to get off the ground. The revenue is also supposed to fund health education programs, like the one that’s helped Huerta learn how to manage his condition.

“Taxation, just like it did for tobacco, is the most effective way to get people to change their behavior,” says Barry Popkin, who teaches global nutrition at the University of North Carolina. He’s working with researchers from Mexico’s National Institute of Public Health to document the impact of that country’s soda tax.

It’s still early, but their preliminary results suggest that during the first three months of 2014, purchases of sodas and other taxed beverages declined by 10 percent compared to the same period last year, while purchases of bottled water went up 13 percent.

“Essentially, people were substituting the plain water, the healthiest beverage we could drink other than milk, for the sugary beverages,” according to Popkin.

ConMexico, the country’s major consumer product group, which fought against Mexico’s soda tax, says it’s not clear the tax is directly responsible because consumer spending is down in many categories thanks to a weak economy. And the industry group argues the tax is regressive, hitting poorer families especially hard.

While Mexico’s soda tax may be changing some consumer habits, it’s not hard to find people in Tijuana who think it’s a bad idea.

“I don’t think taxing a product is going to do a lot of educating the public. I just don’t,” says Juan Valle, whose family owns a small market less than a mile from the US border.

Valle says sales of Coke at his store are actually up — despite the tax. But Valle also says his customers seem to like a new product called Coca-Cola Life. It's half-sugar, half-Stevia, a no-calorie sweetener.

Public health advocates say if consumers would just start choosing lower-sugar sodas or smaller bottles, that alone would be a victory.

In the border region, though, many Mexican consumers have a way of getting around the soda tax: They can cross the border and just shop in the US.