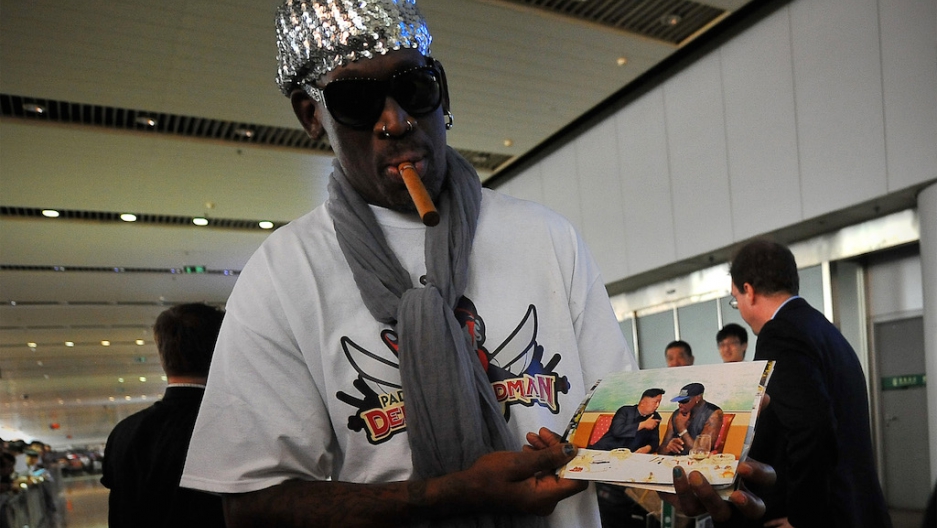 SEOUL, South Korea — Kim Jong Un has had a wild and crazy 2014. He rang in the New Year with rumors (later retracted) that his executed uncle had been “stripped naked, thrown into a cage, and eaten alive by a pack of ravenous dogs.” If you think that’s a grotesquely creative way to die, a second unconfirmed tale soon swirled that his uncle’s loyalists were killed by a rocket grenade and their corpses “incinerated by a flamethrower.” By September, the boyish leader had gone missing, only to show up later walking with a cane.

And now his regime is in full hissy-fit mode, threatening to test another nuclear weapon and forewarning “catastrophic consequences” for his detractors.

Why the belligerence? A few analysts speculate that Kim and his friends may someday find themselves behind bars.

In mid-November, the United Nations General Assembly passed a resolution requesting that North Korea’s leadership be referred to the International Criminal Court, for possible charges of “crimes against humanity” relating to its human rights record.

North Korea had lobbied hard to squelch the move, going on an odd charm offensive that featured an actual press conference at the United Nations — a big deal for the reclusive regime. It also released two American prisoners last month, Matthew Miller and Kenneth Bae.

And it tried, ham-handedly, to discredit the UN commission that investigated the country’s rights record. Through state media, Kim’s regime questioned how a gay man (Mark Kirby, who happens to be a distinguished Australian lawyer) could lead such a prominent global inquiry. And it issued a 50,000-word counter-report, claiming North Koreans "feel proud of the world's most advantageous human rights system."

Which raises the point that even a celebrated rogue like Kim Jong Un needs political allies around the world — and not just drunken hoops-players.

It turns out that North Korea does court allies. The People’s Republic of China is a fairly reliable BFF. Yet while Beijing values the Kim clan as a useful buffer against US influence near its borders, there’s evidence that China’s leaders are growing impatient with their awkward neighbor.

As a global outcast, the regime also has a lot of friends of dubious value at UN headquarters. Here’s a gallery of the businesspeople, humanitarians and ideologues who’ve warmed up to North Korea:

North Korean military parades look like the garish rituals you would have seen in Nazi Germany or the Soviet Union, with triumphant goose-stepping soldiers, missiles (and missile mock-ups), and, looking on from a regal pedestal, the Supreme Leader himself.

Such cavalcades reveal the soul of this hawkish regime, which is built on a fervor for Korean racial purity and admiration for Kim’s personality cult.

This thinking has garnered attention from like-minded cliques: white supremacists and neo-Nazis, who yearn for the “nobler days” of supposed Aryan rule.

The regime found this sort of ally in John Paul Cupp, officially recognizing him as the Chairman of the Songun Politics Study Group USA more than ten years ago while he was homeless in Oregon, according to a report by investigative journalist Nate Thayer. With several regime-sanctioned visits under his belt, state media have portrayed Cupp as a “prominent US public figure” who led a mass movement against American imperialism.

In 2011, Cupp was dropped as the leader following a power struggle with another pro-Pyongyang group, the Rural People’s Party (RPP), Thayer reported. Its chief, Joshua Sutter, ran the RPP’s North Korean study group out of a trailer home in South Carolina, displaying on his website a North Korean flag and portraits of Kim Il Sung and Kim Jong Il.

Spaniard Alejandro Cao de Benos is the head of the “Korean Friendship Association,” a more structured global club that claims on its website to have “full recognition from the Government of the Democratic People’s Republic of Korea.” The organization claims close to 13,000 members, although it’s unclear how many swear true loyalty, or just signed up for fun on the website.

On a mission to promote North Korea to the world, Benos arranges study visits for tourists interested in North Korea, in which he wears military garb, affably shakes hands with officials, and lends a hand to construction projects for what he calls a “worker’s paradise.”

His work has led to at least one tussle with the American press, which, of course, tends toward a critical stance on anything North Korea. Benos once ransacked an ABC News reporter’s hotel room in Pyongyang, taking tapes and forcing the journalist to sign an apology letter before leaving the country. Benos admitted culpability in the 2006 documentary "Friends of Kim."

Benos has much to say about the regime’s position on the UN human rights inquiry. “The United Nations is fully manipulated by the interests of the big powers,” he told GlobalPost. “Since they cannot destroy our socialist system by the force of military pressure, they are trying to buy and bribe some people and organizations in order to fabricate a case against the DPRK.”

Jindallae Safarini is actually the daughter of a former Palestinian ambassador to Pyongyang. But she proudly finds an honorary father in Kim Jong Il, the now-deceased former dictator, staking truth in a story that the Dear Leader’s blessings allowed her sterile mother to conceive following the death of an earlier child.

“I was given the name by aboji [father] Kim Jong Il,” she claimed in a state television interview, explaining that her name is the Korean word for the bright-pink Azalea flower.

Jindallae, in her late twenties, last popped up in the media in 2012, traveling to Pyongyang for the first time in 20 years to set up a children’s health charity. But since then, she’s kept a low profile, and efforts by GlobalPost to reach her have failed. North Korea-connected sources in China and Vietnam say she has either relocated to Palestine after studying medicine in China, or continues to work at a hospital in Beijing.

Seeing the potential for business in North Korea, Hon made inroads in Pyongyang in the mid-2000s, announcing a sudden takeover of the Daedong Credit Bank, a now heavily sanctioned institution that has since been acquired by a Chinese firm, the Nice Group. Hon’s buyout never materialized, and he no longer has any ventures there.

Later, Hon emerged as the chairman of the “International Kim Il Sung Foundation” until 2012, according to his curriculum vitae. State media said the goal of the organization was to “contribute to the study and dissemination of the Juche idea worldwide,” referring to North Korea’s self-reliance ideology. That may sound like a propaganda gig, but Global Group vice chairman Keith Bennett claims the group had purely “humanitarian and philanthropic aims.”

“Dr. Hon's position as Chairman did not make him a spokesman for the DPRK government,” he said.

Get ready for a power struggle, Nobel.