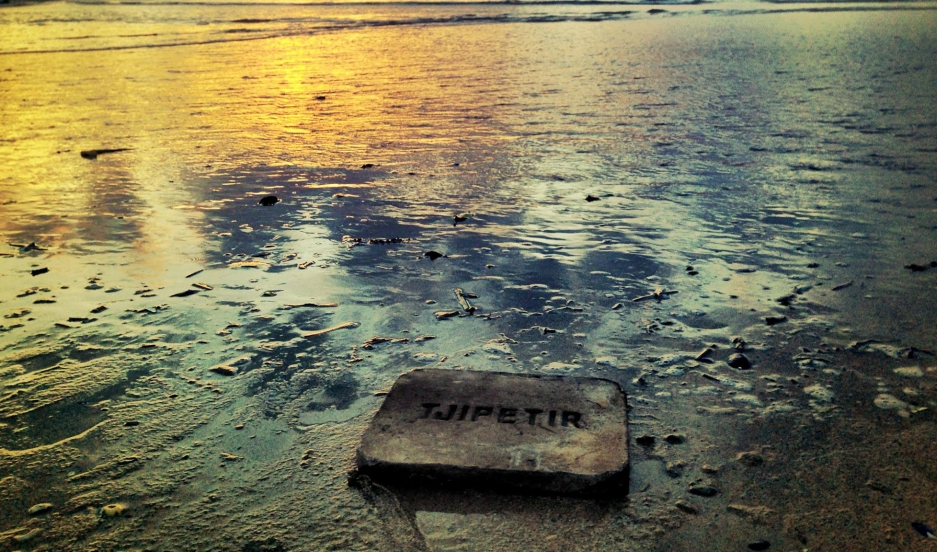 Beachcomber Tracy Williams discovered her first Tjipetir block in the summer of 2012. Now, she runs a Facebook group collecting photos and stories of other blocks that have washed up on beaches throughout northern Europe.

Beach visitors for years have wondered why rubber-like slabs, imprinted with the word "Tjipetir," were washing up on beaches throughout northern Europe.

But recently, the history of these blocks was uncovered by British beachcomber Tracy Williams. And it dates all the way back to submarine warfare of World War I.

“I’m not a historian, I just clean the beaches,” she says. “I do walk on the beach with my dog every day, and I’m always absolutely intrigued by everything that washes up and where it comes from.”

Back in 2012, she discovered her first Tjipetir block during a beachside stroll in Cornwall, England.

“I took it home, and I googled the word 'Tjipetir,' and at that time there was hardly anything on the internet about it. It really just said it was a village in Indonesia,” she says. So, she put it in her yard and forgot about it.

But just a few weeks later, on a different beach, she found the same oddity — this time, accompanied by bales of rubber. “Finding one was understandable, but a second one turning up was quite odd.”

Naturally, Williams got curious and decided to do some investigating.

Turns out, Tjipetir was the site of a 19th century Indonesian rubber plantation. She also discovered the slabs aren't technically made of rubber, but rather, most likely, something called gutta-percha, a substance that is yielded from a tree native to Malaysia and the Malay Peninsula. Because gutta-percha predates plastic, it was used for everything from teddy bears' noses to book bindings, hot air balloons, fireman’s hoses, and — most commonly — waterproof coating for submarine cables.

Williams logged her findings on a Facebook page. She soon began to receive submissions from people who had found their own slabs on beaches in England, Shetland, Norway, Sweden, France, the Netherlands, Germany, Denmark, Spain and the Channel Islands.

“The Tjtipetir story really did intrigue me ... I have been fascinated," she says. "And it has taken over my life slightly in recent years.”

For a while, it was widely believed — due in part to reporting from a French newspaper — that the Titanic had carried the capsized gutta-percha. While that's true, she says the current findings aren't from Titanic cargo. In 2013, Williams learned about the cargo ship Miyazaki Maru, a Japanese vessel that was sunk by a German submarine during World War I, which was carrying gutta-percha blocks.

The British government, specifically, the Receiver of Wreck, believes that is the source of the blocks washing up on European beaches. But Williams isn't satisfied with just knowing where the blocks came from.

"The important thing is, for me, that the story’s only just beginning. We might know the name of the ship, but there are the stories of everybody on board that ship, and what happened to it."

By the way, here's another mystery that was solved after Legos started washing up on beaches.