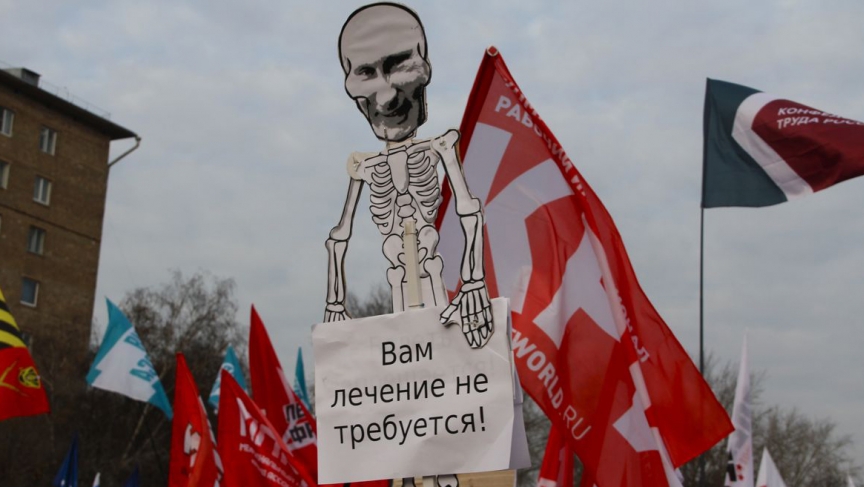 At Sunday's protests against hospital closures and medical layoffs in Moscow, one sign featured Putin as a skeleton. The sign reads: "You don't need treatment."

Most doctors will tell you it's not healthy to spend too many hours outside in subzero temperatures, smoking cigarettes to stay warm.

Yet that's what some Russians were doing this weekend, in Moscow and other cities across the country. Several thousand doctors, nurses and patients went out on Sunday to protest reforms to Russia’s healthcare system. As part of cost cutting measures, authorities announced last month they plan to close dozens of hospitals and lay off up to 10,000 medical staff.

Protesting against the government was something new for many, and it showed: doctors marched in awkward rows; their chants never really took hold.

But what they lacked in organizational experience, the protesters made up in conviction. Their message? Amid trying economic times, Russians' health is being sacrificed by a government with deeply misplaced priorities.

Elena Kovaleva says it was her first time out protesting. A mother of three, Kovaleva says after watching prices rise in the shops and seeing cuts to education, the healthcare layoffs were the “last drop.”

“The country has reoriented itself around protecting the ruling class,” Kovaleva says. “And now there's no money left for problems faced by average citizens.”

As an example, some point to the so-called Rothenberg law — the nickname given to a government-sponsored bill that would compensate Kremlin-connected businessmen, like the billionaire Arkady Rothenberg, for losses incurred as result of punishing Western sanctions.

That legislation has not passed, yet, but Dr. Valerie Ivkin, a longtime cardiologist, is already angry.

“We'll have to give money to stave off the financial risks facing some oligarch, while the sick and the poorest of the poor are left to die,” Ivkin says.

Sentiments like that could create problems for Russian President Vladimir Putin. The Russian leader has enjoyed record approval ratings since a wave of patriotism swept the country following Russia's annexation of Crimea earlier this year.

Only now, according to a young father named Grigori Petrov who was out protesting, healthcare and other social progams are suffering so Putin can pay for Crimea. Petrov says the recent reforms have him reconsidering his past support of the Russian leader.

“The presidential elections showed that the majority of our country supported Putin, and I basically agreed. But politics is one thing and social issues are another. I felt I had to come out here in the cold with my wife and my child to defend our rights to free education and healthcare.”

In statements like these, Oleg Shein sees a nascent political movement. Shein, a member of an opposition party, was one of the only politicians allowed to speak at Sunday's rally.

But Shein was also an important player in anti-government protests that swept Moscow and other cities back in 2011. He admits that movement fizzled with good reason: democratic leaders failed to connect to the bread and butter issues that matter to most Russians. But Shein says the doctors rebellion represents a new and important opportunity.

“A protest for democratic freedoms was seen by many in society as something really abstract, far from daily life. But when those democratic demands combine with social needs, we'll see a completely new Russia, both free and just,” he says.

Nikolai Oleinnikov was part of a group of young leftist radicals who came out to support the doctors, and were, by all appearances, having a good time doing so. But Oleinnikov says his group has a sincere desire to form an alliance with those protesting about healthcare.

“These people, for the first time, feel the need to be on the street, to protest. And we have to support them somehow. They have to feel our energy so we are together as well, so it's not just them marching. They are us,” he says.

In a sign that the Kremlin appears to be concerned about that, President Putin has called for Moscow’s government to revisit the doctor layoffs. City officials have since announced compensation packages will be offered to those affected by cuts.

How Russian medical workers respond may determine whether Sunday's rally was just one day of anger or the start of a something more troubling for the Kremlin.