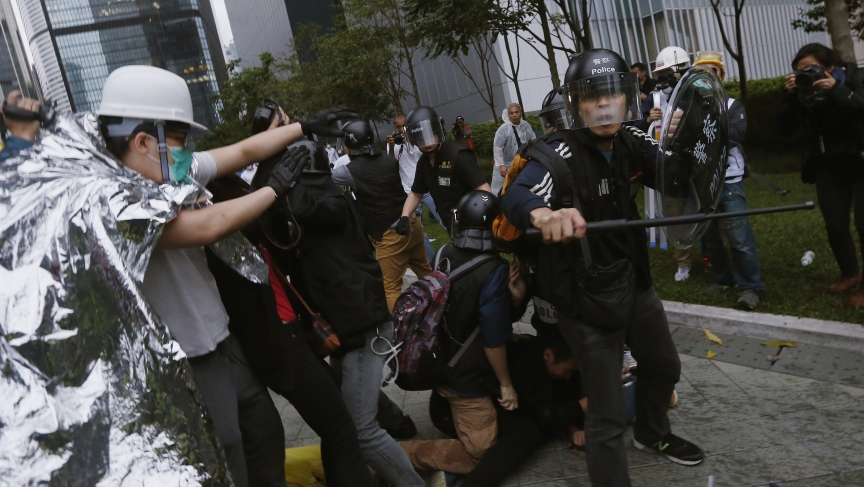 Hong Kong police baton-charged and pepper-sprayed thousands of pro-democracy demonstrators in the early hours of December 1, 2014. The protesters were trying to encircle government headquarters, defying orders to retreat after more than two months of protests.

Student protest leaders in Hong Kong apologized to fellow demonstrators on Monday after their attempt to force action by the government over the weekend led to clashes with police and no concessions from city' leaders.

Organizers asked supporters to block government buildings on Sunday, hoping to paralyze the government and break the calm but fruitless status quo. But police responded with their most heavy-handed actions yet, and authorities say more than 40 people, including 17 police officers, were injured and at least 40 protesters were arrested.

“The whole plan did not achieve its objective of paralyzing government," protest leader Alex Chow admitted on Monday. C.Y. Leung, Hong Kong's chief executive, has warned protesters against returning to the streets. "From this day on, the police will take resolute action when carrying out their duties."

Ilaria Maria Sala, a Hong Kong-based correspondent for Italian newspaper La Stampa, says the protest movement has been losing steam. “The government has been pursuing the strategy of waiting the students out, letting them get tired,” she says. “And this largely has happened.”

The demonstrators’ ongoing occupation of Admiralty Centre, the main protest site, has also become an irritant to many Hong Kongers. The area is typically a busy commercial and administrative hub, but traffic flow has been hindered by makeshift barricades and hundreds of tents set up by protesters in the middle of the street.

"For the past few weeks, really, [protesters] have been trying to work out what comes next,” Sala says. But she argues that, in trying to break the status quo, the student leaders miscalculated how police would respond.

But Sala points out that its main goal of winning “true universal suffrage” ahead of the 2017 election for Hong Kong’s chief executive is still widely supported by the public. And three student protest leaders — including Joshua Wong, the founder of the group called Scholarism — now say they will go on hunger strike until the Hong Kong government agrees to restart negotiations about the Chinese territory's democratic rights.

"Living in these troubled times, there is a duty. Today, we are willing to pay the price," the students said in a statement.

Sala believes the hunger strike is likely to generate a strong reaction from the public. “Nobody wants to see these young kids go through something so painful and open-ended," she says.

“On the other hand, until now, what we have seen is complete indifference [on] the part of the government toward whatever hardship the students have been putting themselves through,” she added. “There is this strong refusal of any kind of consultation and dialogue."

Divisions within the Hong Kong protest movement present another obstacle. Leaders from the pro-democracy group called Occupy Central with Love and Peace, which took on a very prominent role in demonstrations early on, have removed themselves from the forefront of the movement. Smaller and more radical protest groups have also had disagreements with the main student protest organizations, Scholarism and HKFS, over tactics and methods.

“It is a leaderless movement,” Sala said. “So, of course, it has all the difficulties you may imagine that can come from a movement of this sort.”

Many Hong Kong people who once supported the students now believe the protest leaders missed an opportunity, Sala said. Instead of stepping back from street protests with the benefit of widespread public support, the students are now struggling to find a way forward.