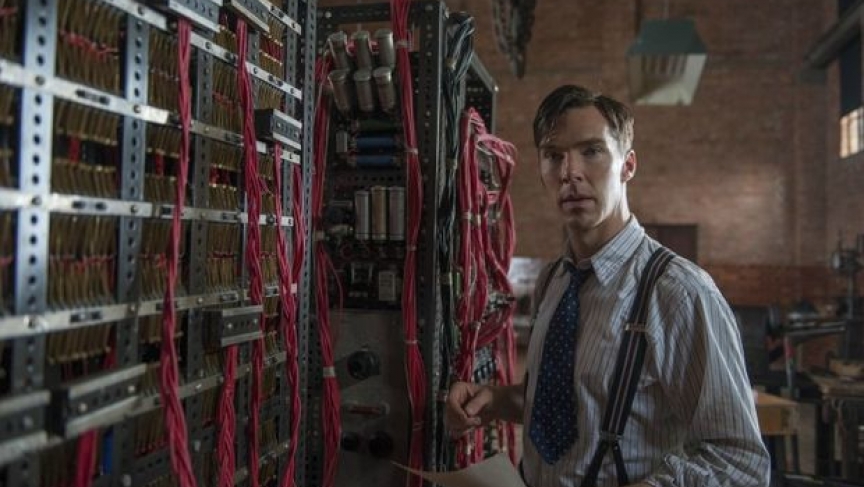 Benedict Cumberbatch stars as Alan Turing in The Imitation Game.

Benedict Cumberbatch's latest movie — The Imitation Game — has him playing the English mathematician Alan Turing. Turing is both a famous and obscure figure, known for his brilliance in code-breaking and computing and long ignored because of his homosexuality.

Turing is best known today for the Turing test of artificial intelligence — where he posed the challenge of whether a computer could ever pass as a human in a conversation. Namely, could it pass what he called "the imitation game?" — hence, the title of the new film.

During World War II, Turing's team cracked the Nazi’s “Enigma” code at Britain’s top-secret spy center, Bletchley Park, significantly speeding the Allied victory. That breakthrough led Turing to invent the basis of modern computing and his innovations underlie the digital world as we now know it.

Yet Turing was never truly celebrated for his feats during his lifetime. On the one hand, he remained silent about his wartime heroics, obeying his oath of secrecy. On the other, he was persecuted in the 1950s for being a homosexual, which was then a crime in Britain, and died under mysterious circumstances.

As late as 2001, the film Enigma left Turing out of the story of the code breakers at Bletchley Park, replacing him with a heterosexual mathematician-hero. Yet many writers and artists have been taken with the tragic arc of Turing’s story. He has been a character in plays, a dozen or more sci-fi novels and a rock opera by the Pet Shop Boys.

And, lately, Turing's figure is taking on mythic proportions.

Graham Moore wrote the screenplay for The Imitation Game. He’s been obsessed with Turing for years. “Among awkward, dorky teenagers without friends, like myself, Alan Turing was this object of kind of cult-like fasciation,” he says.

“He was this campfire legend — 'Did you know that the man who secretly invented the computer was gay and no one knows because he was persecuted by the government after the war?'”

In World War II, Turing’s big insight was that Germany's Enigma code was too complicated for any person to decrypt it, says Columbia University astrophysicist Janna Levin, who  wrote the book, A Madman Dreams of Turing Machines. Turing realized it required a machine.

“He imagined a machine like a typewriter," says Levin, "and that machine would read a tape." That typewriter-like machine became what we now refer to as computer hardware. "And the zeros and ones — the tape that it reads — becomes like the software,”  explains Levin. In fact, early computers were once known as Universal Turing Machines.

Turing's code breaking was top secret for decades, but the mathematician's personal life was outed by an ex-lover in 1952, when homosexuality was still illegal.

Turing was prosecuted and submitted to injections of estrogen (deemed a type of chemical castration) in lieu of going to prison. Two years after the trial, he was found dead, lying next to an apple laced with cyanide — possibly a reference to Snow White, a favorite fairy tale of Turing’s. The official cause of death was suicide.

Today's fascination with artificial intelligence — as in the Spike Jonze film, Her, where a man falls in love with his computer operating system —  may be one reason Turing's story has become a Hollywood film starring Benedict Cumberbatch. Turing's life, and death, is also the focus of an opera being written by David Simpatico and Justine Chen.

The opera uses different theories about Turing's death — whether it was a suicide, an accident or a government assassination — to explore his life. In the opera, his final “death” is poetic: Turing uploads his consciousness to a computer. That may be a fitting end for someone considered the father of artificial intelligence.

Yet Turing's life was more complicated than his achievements and remains relevant. He was a government insider privy to the secrets of power, but also an outsider and maverick — and that contradiction still defines how the tech industry sees itself.

This story first aired on Studio 360 with Kurt Andersen.