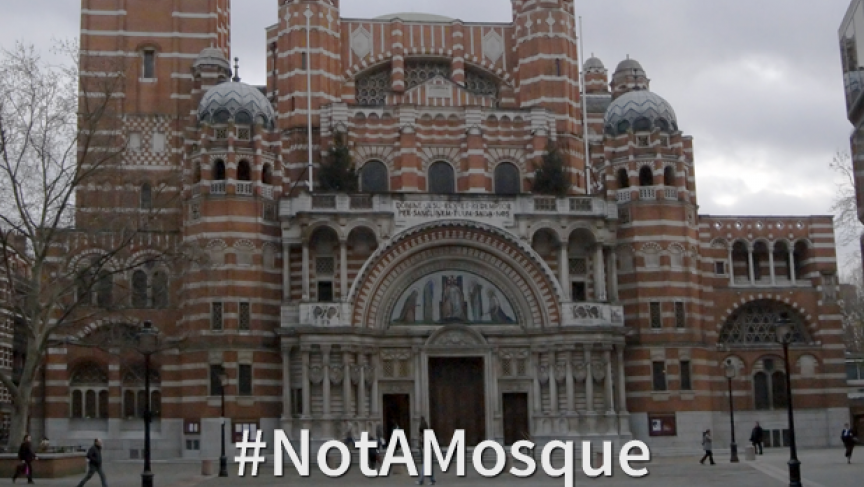 An image of Westminster Cathedral, which a local branch of the UK Independence Party mistook for a mosque.

The BBC's Daily Politics show recently asked viewers for their opinion on Nigel Farage, the leader of the upstart anti-immigration UK Independence Party that has been gaining ground on the country's traditional parties. What they got in response was Twitter gold.

Giles Dilnot, a reporter for the show, stood outside a grand brick building, asking passers-by if Farage would make a plausible prime minister. A local UKIP affiliate responded what it thought was some snark about the imagery: "Perfect place to hold vote in front of a mosque in London," the account tweeted. 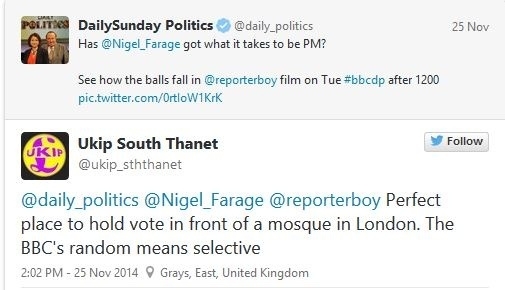 A screengrab of the tweet in which the UK Independence Party's affliate in South Thanet accused the BBC of asking passers-by about Nigel Farage in front of a mosque. The tweet was later deleted.

The problem? Dilnot was standing outside Westminster Cathedral, the most important Catholic church in England and Wales. The tweet was taken down, but Twitter users quickly picked up on the mistake and helpfully pointed out other things that might be confused with mosques.

The right-wing UKIP, whose platform calls for immigration control and withdrawal from the European Union, had never gained much momentum in British politics until this year. But during local elections held in May, UKIP "made quite an insurgency into domestic politics in the UK," Dilnot says.

The party already has two members in parliament, and is looking to make Farage its third during the parliamentary elections due next year. "Farage is a very charasmatic person, but opponents believe his party is at best xenophobic and has been branded at times racist," Dilnot explains.

Dilnot and his producers expected the accusations of bias. The informal poll was taken in London, which is not a stronghold for UKIP. "I was prepared when it was broadcast for some people to question why we had done it in London," he says, but "but not why we had done it outside a London 'mosque.'"

This is what today's UK immigration heatmap (on @Telegraph) looks like next to UKIP voting hotspots pic.twitter.com/GCyAq58UWS

The person who made the mistake was a volunteer operating the party's Twitter account in South Thanet, a district of 68,000 in the county of Kent. Yet the volunteer made the situation worse, Dilnot says, by demanding the BBC reporter send proof of his location. Quickly, the hashtags #ThingsThatAreNotMosques and #NotAMosque caught fire.

Yes shoes off, but no it's #ukip @Nigel_Farage @UKIP #notamosque pic.twitter.com/x2H92nTB3B

Dilnot's favorite tweet is of the supermodel Kate Moss.

The backlash on Twitter indicates that next year's general election in the UK might mirror the "gaffe culture" that dominates elections in the US. "It just goes to prove that the ripples you make in a small mistake domestically can lap all the ways to the shores of the Atlantic," Dilnot says.

For its part, the BBC asked Farage for a response to the gaffe. Dilnot says that he handled it with humor: "He said that the people's army ... is an enthusiastic bunch but not always completely trained."