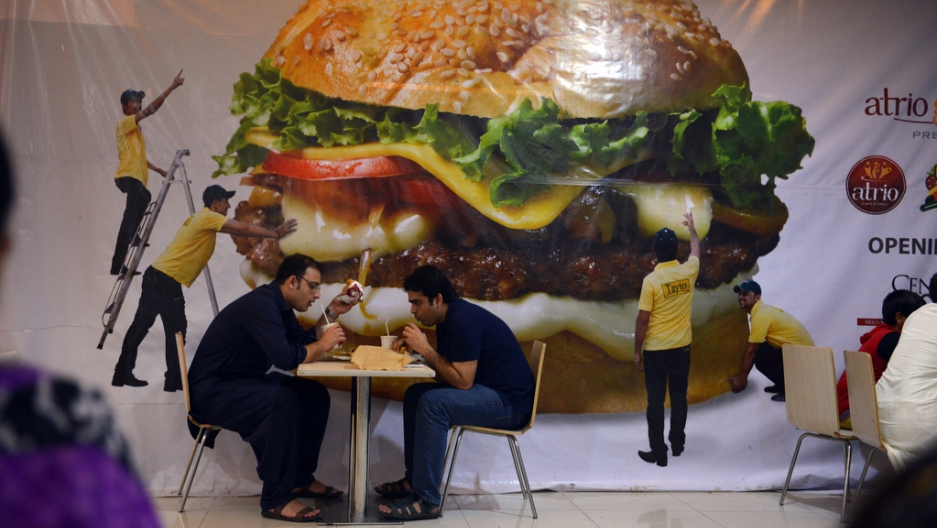 Pakistani men eat burgers at a mall in Islamabad on October 25, 2014.
Share

Here’s a statistic to think about after stuffing yourself with turkey and pumpkin pie this Thanksgiving. More than half of the world’s 671 million obese people live in just 10 countries.

And — surprise, surprise! — the highest proportion, 13 percent, are in the United States.

“Obesity is an issue affecting people of all ages and incomes, everywhere,” said Christopher Murray, director of the Institute for Health Metrics and Evaluation at the University of Washington, which led the study of 188 countries published in The Lancet.

“In the last three decades, not one country has achieved success in reducing obesity rates and we expect obesity to rise steadily as incomes rise in low- and middle-income countries in particular, unless urgent steps are taken to address this public health crisis.”

Obesity is measured by a person’s body mass index, which is a weight-to-height ratio. A person with a BMI of 25 to 29 is considered to be overweight, while someone with a reading of 30 or more is obese. According to the World Health Organization, more women than men are tipping the scales at obesity levels.

Fridge-loads of studies have been published about the global obesity epidemic and, owing to its huge health, social and economic impact, that trend is likely to continue.

It is estimated that the number of overweight and obese people has more than doubled over the past 30 years, from 857 million in 1980 to 2.1 billion people in 2013, the equivalent of nearly 30 percent of the world’s population.

In fact, there are now almost two-and-a-half times as many overweight and obese people on the planet as there are undernourished. And more people die from eating too much than from not eating enough. Yikes.

The reason we are so fat — and getting fatter — is pretty simple:  We are consuming more calories than we are burning off. This wasn’t such a problem for our ancestors, who were more physically active and survived on a diet that was based on less calorie and fat-dense food. But in the modern age we have computers, Netflix, potato chips and sugary sodas.

While most people probably think about obesity as a health problem, it also has pretty serious economic consequences.

Obesity costs the global economy about $2 trillion a year, or 2.8 percent of global GDP, almost the same as smoking or armed conflict, McKinsey Global Institute, the research arm of management consultancy McKinsey & Company, said in a report.

So that's $2 trillion a year that could be spent on something else, like helping the hungry, if we all stopped gobbling so much. That's food for thought as you ask for a second serving of dessert.

This is a list of the top 10 countries with the most obese people.

10. Indonesia; 11 million or 6.8 percent of the adult population