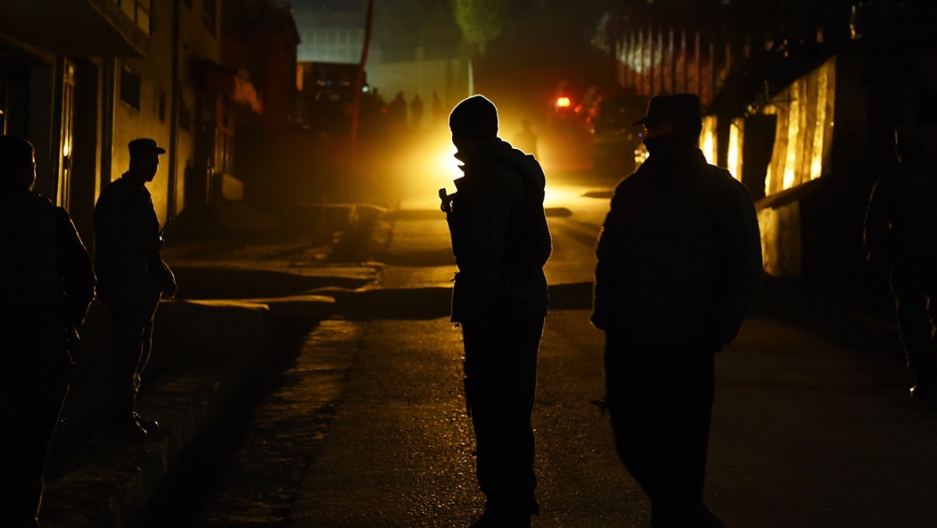 Afghan policemen stand guard at the site of a suicide attack at the foreign guesthouse in Kabul on Nov. 27, 2014.
Credit: SHAH MARAI
Share

KABUL, Afghanistan — It was almost a traditional holiday. There were two Butterball turkeys, complete with pop-up thermometers, procured from friends of friends. There was a vat of Ocean Spray cranberry sauce, bought at the “Bush Bazaar,” a market in the city where goods that seem to have fallen off US military trucks find their way into the local economy.

Many of the guests were “hyphenated Americans,” and the toast at the onset of the feast brought a tear to even the most cynical eye.

“This is a very special holiday for me,” said a woman born in Iran, her voice trembling. “We will always be grateful to the United States for giving us safety from the war and destruction in our home countries.”

But it had been a difficult day for Kabul residents. The morning started off with a massive suicide attack against a British convoy that killed six and injured some 35 more.

Two of the dead were employees of the British Embassy, and all of the guests at the Thanksgiving celebration, who included Afghan dignitaries, UN officials, aid workers, and the occasional journalist — could feel the war drawing uncomfortably close.

Barely had the first golden, crispy bird been cut when reports came that another attack was underway in central Kabul, in one of the most heavily guarded parts of the city.

A suicide bomber had breached the defenses of a guesthouse belonging to the International Relief & Development (IRD) organization. Gunmen were apparently still in the compound, resisting Afghan police.

The party talk grew a bit nervous, the television was turned on, but instead of football the screen alternated between CNN and Tolo, one of Afghanistan’s premier news outlets.

Several guests were stuck in place, since their respective security advisers said it was too dangerous to move around the city. So the festivities continued, with a bit of a “Masque of the Red Death” air about them.

Finally, at about 11:30 p.m., most everyone was home, safe, and ready to put the day away. But then the bombs started again. For more than an hour, blasts rocked the city, punctuated by gunfire. Helicopters circled overhead, and only the bravest or most foolhardy were able to sleep.

Twitter went crazy, as Kabul’s tech savvy crowd issued minute-by-minute updates. But the blasts were coming so fast that even the cyber world could not keep up.

two more just now. what is happening in #Kabul? Three explosions in 10 minutes. no, make that four. and more gunfire.

Bilal Sarwary, a former BBC reporter, did a lot of the legwork: using his numerous contacts with the police, he kept anxious Kabulians updated.

Finally, after 1 a.m., the fighting stopped.

#AFG Police chief GZahir,we V confirmation from our US allies flying helicopter attacker is not moving, we think he is dead& attack is over.

Taliban spokesman Zabiullah Mujahed had his own Twitter take on the fighting:

The “heavy enemy losses” apparently boiled down to a Nepalese security guard for IRD who was injured, but not killed.

It had been an entire week of mayhem in Afghanistan. On Sunday, a suicide attack killed three and injured more than 30, including a prominent female lawmaker.

Most thought that the lawmaker had been the target: Shukria Barakzai has been an outspoken advocate for women’s rights, and the supposition was that the notoriously misogynistic Taliban had had enough.

But the Taliban, normally not shy about taking responsibility for such attacks, denied involvement, and rumors almost immediately began swirling that the intended target had been Second Vice President Sarwar Danesh, whose car had preceded Shukria’s.

According to a UN official, speaking on condition of anonymity, there may have been some fire amid all the smoke. “According to my sources, Danesh was indeed the target,” said the official. “And the perpetrators were from a rival political group.”

No one will name the alleged evildoers publicly, but the rumors are persistent enough to have some wondering whether this was an opening salvo in a civil war.

On Sunday afternoon a suicide bomber targeted a packed volleyball match in eastern Afghanistan; the death toll is estimated to have reached more than 60, with dozens more injured.

Paktika province, where the attack took place, is on the border with Pakistan, and a stronghold of the powerful Haqqani network, an insurgency group that allegedly has backing within the Pakistan’s security establishment.

The Taliban themselves were far from idle.

On Monday they targeted a NATO convoy, killing two US soldiers on the outskirts of Kabul.

Some smaller explosions and a few rockets were heard in Kabul on Tuesday and Wednesday, fortunately without casualties.

The tension is rising.

“Kabul is turning into Baghdad,” grumbled an Afghan journalist.

The week marked another milestone in this longest of American wars. On Sunday the Afghan Parliament ratified the Bilateral Security Agreement, which provides from some 10,000 US troops to stay in the country after the end of the US combat mission this year, to continue to train and advise the Afghan forces.

“This endorsement by both houses of Parliament is a clear statement of the Afghan government’s desire to secure the gains we’ve made and to continue our partnered efforts in establishing enduring, sustainable security in Afghanistan,” said General John F. Campbell, commander of the International Security and Assistance Force (ISAF), in a statement issued Thursday.

But these troops will be doing more than mere advising. Last week, President Barack Obama quietly extended the US role in Afghanistan; American troops will be involved in fighting the Taliban, a dramatic turnaround from Obama’s previous position, that the US combat mission would be over as of Dec. 31, 2014.

The move is apparently dictated by fears that Afghanistan could become another Iraq, which descended into chaos after the withdrawal of US troops in 2011. Afghanistan’s new president, Ashraf Ghani, is also more receptive to a direct role for the US military than was his predecessor, Hamid Karzai.

Over the past few years, Afghanistan went from “The Good War” to “The Forgotten War.” Now it is thrusting itself once again into the spotlight, as attack piles upon attack, and Afghans wonder uneasily what awaits them.

Friday dawned in Kabul, cold and quiet. No more rat-a-tat-tats from automatic weapons, no more percussive waves from bombs. Planes and helicopters still circle overhead, but the sound is more reassuring than alarming.

No one knows what the night will bring.