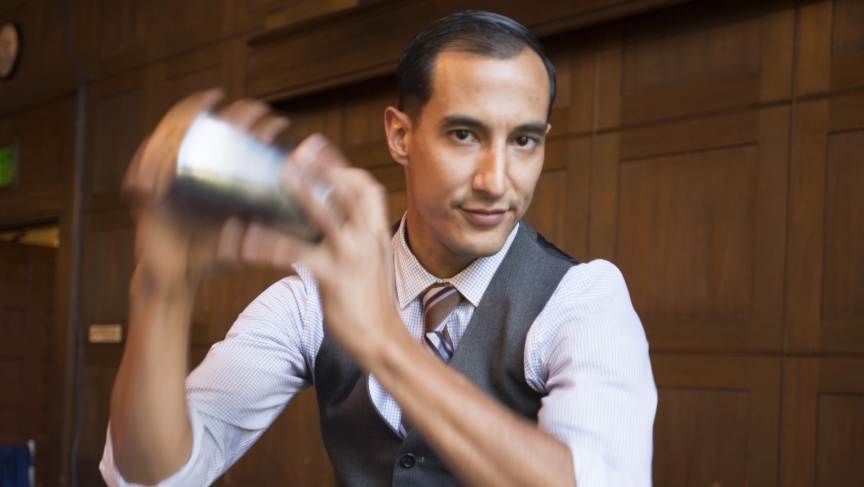 Tony Gurdian, at Imperial in Portland, Oregon, uses his homemade switchel to make a drink called The Haymaker's Revival.

Tony Gurdian pretty much looks the part of a hipster bar manager. He shakes up cocktails at Imperial, a restaurant in downtown Portland, Oregon. And one of his most popular drinks features a very old ingredient: switchel.

“It’s almost like one of the original mocktails,” explains food writer Corin Hirsch, who has studied the drinks of colonial New England. “It’s a drink that has a lot of flavor and layers to it, but it doesn’t have alcohol."

Hirsch says switchel was a thirst quencher of choice a few hundred years back. While switchel wasn’t at the first Thanksgiving, it was popular from the 1700s through the 1900s — especially as a farm drink, like lemonade.

​“It actually has electrolytes in it — I’m not sure people understood the mechanism of it back then, but it was just seen as a healthful drink,” Hirsch says.

So what is switchel, anyway? 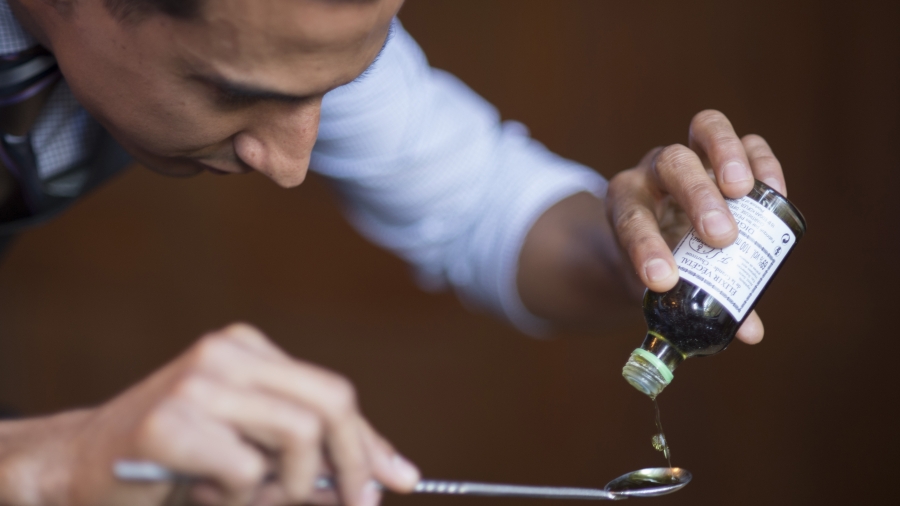 “Switchel is actually really, really simple,” says Gurdian. This being Portland, he makes his from scratch. “You want to start off with some really, really fresh ginger. And then I get blackstrap molasses. I add half of a cup apple cider vinegar, and put that in a pot with just a little bit of water.”

Vinegar-based drinks may sound a bit unusual to modern palates, but they were actually pretty common in centuries past. “Vinegar could substitute pretty well for alcohol in terms of providing some tang, or for citrus, which didn’t always make it inland from the coast,” Hirsch explains.

“The addition of vinegar is probably a New England adaptation of what had been a Caribbean drink,” says Frederick Smith, an anthropologist at the College of William and Mary, who studies the role of alcohol in the Caribbean.

“The fact that switchel combines these different ingredients suggests that it was a form of sour punch,” Smith says. “Basically, planters were mixing a variety of different exotic fruits and spices to come up with not only refreshing drinks, but what they thought were elixirs of life.”

But while switchel resembles Caribbean punches, and uses Caribbean ingredients, Smith says it’s American. Molasses and ginger are both from the Caribbean, but from different parts — molasses from sugar islands like Barbados and Martinique, and ginger from the spice Islands like Grenada. For the most part, they only come together as exports on the shores of America.

That drink became popular with everyone from New England farmers to temperance advocates to members of Congress — who liked to flavor their switchel with a little bit of rum. Now some are hoping it’ll become popular again.

Garrett Riffle started selling switchel at his farmer’s market a few years back. “We would have older Vermont folks come up to the table and tell us how their grandfather used to bring it out in the field with them," he says. "It brings back a lot of memories."

Like a lot of Vermonters, he swaps out the molasses in favor of maple syrup for a more local variation. His company, Up Mountain Switchel, now sells their jars in stores from Whole Foods to Fairway — about 300 gallons a week.

“It’s refreshing, and it’s really versatile,” says Riffle. “You can heat it up like a tea, or you can mix it with a little moonshine. Make a nice cocktail with it.”

And, we should point out, it's a fine complement to your Thanksgiving leftovers.