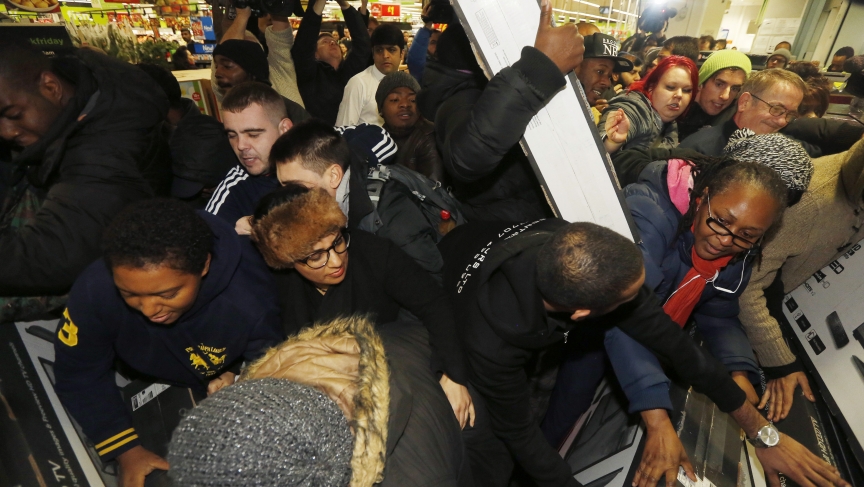 The day after Thanksgiving has historically been the biggest day for shoppers in the United States, but it's now being adopted as a retail extravaganza in other countries, too.

Bargain hunters struggled through store entrances for deals on flat-screen TVs and other consumer electronics at stores across the UK on Friday.

“It got a little bit nasty at one point when people were pushing each other over, fighting over boxes and a big pile of wide-screen TV boxes almost fell over," says the BBC's Adam Kirtley, who witnessed the rush at a branch of British superstore ASDA in the London suburb of Wembley.

Police were called to a number of stores to calm angry crowds, but London’s Metropolitan Police said officers worked with staff to "ensure that sale-goers were able to enter and exit the stores safely," and that no-one had been injured "as a result of the overcrowding".

“This is [Black Friday’s] third year here in the UK — but this is the biggest by far,” Kirtley explains. “Walmart lays claim to bringing it over to the UK — so does Amazon. Amazon says it brought it over here three years ago because British online shoppers spotted bargains in the US on Black Friday that they weren’t getting here.”

And it's not just Brits who are embracing Black Friday. Canadians traditionally have crossed the border to the US to take advantage of Black Friday sales, but the weak Canadian dollar has made shopping at home more appealing.

At Toronto’s Eaton Centre, over 270,000 shoppers came out to get Black Friday deals. But the Canadian shoppers were more orderly and polite than the Brits, according to the CBC’s Linda Ward.

“So far, everyone here has been well-behaved,” says Ward.

Scenes from a mall #BlackFriday pic.twitter.com/ABwHSSWghx

Instead of scrambling for cheap flat-screen TVs, Canadians had other concerns.

“I did hear from one retailer who said they had a bit of a run on peppermint bark, if you’ll believe it,” Ward says. “They got a little bit nervous , but they do have quite a bit of stock, so everybody was calm and collected. The Canadians tend to be calm and collected over this kind of thing.”