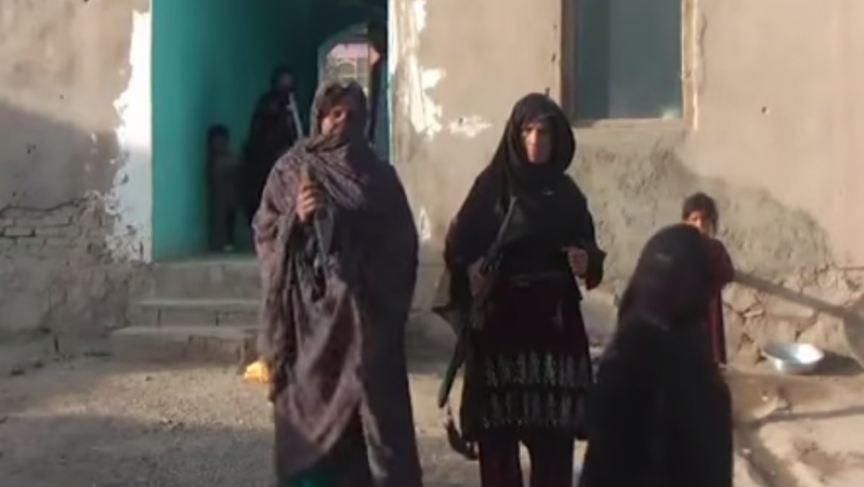 Rezagul, pictured here with her daughter Fatima, has become a symbol of the struggle against the Taliban.

Image from video posted by Afghanistan Wish on YouTube

When an Afghan mother lost her son to a Taliban attack on a police checkpoint earlier this week, she took matters — and an AK-47 — into her own hands.

Having all but destroyed the Taliban detachment with round after bullets, the woman is now being hailed as a “symbol of courage” on Afghan social networks.

Afghanistan's Tolo News reported on Monday that the Afghan mother from the western province of Farah, aided by her family members, killed a slew of militants and injured several others after watching her policeman son die when the Taliban launched a surprise assault on his checkpoint.

"It was around 5 am when my son's checkpoint came under attack by the Taliban," said the woman, identified only by her first name, Rezagul. "When the fighting intensified, I couldn't stop myself and picked up a weapon. I went to the checkpoint and began shooting back."

An Afghan local news agency, Khaama Press, reported that the woman was helped by her daughter and daughter-in-law during a gun battle that lastest nearly seven hours. "We started a kind of family war against the Taliban," said the woman's daughter, Fatima. "I was personally preparing bullets for my father [Abdul Satar, also a policeman] and mother to fight off the enemies."

Farah's police chief, Abdul Razzaq Yaqoobi, verified the death of 25 militants in the checkpoint battle. "We are proud of the bravery of this family," he said. "This is a tale that will be remembered for long by police and residents of Farah province."

Afghan social media networks have filled with praise for the woman. Sediq Sediqqi, spokesman for the Ministry of Interior, tweeted: "The armed campaign by women against the Taliban militants is a symbol of a major revolution and public uprising against the group."

Lina Rozbih Haidari, an anchor for the Voice of America's Afghan service, wrote on Facebook: "If Kurdish girls can defend their nation [from ISIS], then today i can proudly say that we have Rezaguls in my homeland who can give us back the honour that has been violated for many years."

One tweet even joked that Rezagul should become the country's minister of defense.

Gender relations are highly politicized in Afghanistan, but Rezagul's assault on the Taliban appears to have pleased both conservatives, who think of women mainly as bearers of family honor, and advocates of gender equality, who see her actions as a powerful rebuttal to the notion that women are weaker than men.

This story by Sahar Hashimzada was originally published by our partner Global Voices Online, a community of bloggers from around the world.