Beatriz Jaimes cooks up pork and chicken for tamales and shares them with employees of her family's construction company in Texas.

For Beatriz Jaimes, Thanksgiving tradition kicks off with a shopping trip through Austin, Texas.

First, she stops at El Milagro, a national tortilla producer with a store in the state capital. Jaimes buys the powdered corn she needs to make masa dough. She'll fill the dough with meat or other ingredients, and then wrap the package in a corn husk to make a single tamal.

Beatriz Jaimes creates a make-shift kitchen to prepare tamales in the offices of her family's construction company in Texas.

Every year, Jaimes makes more than 1,000 tamales from scratch for people she regards as family: the employees of a construction company she created with her husband in 1984. They started with three employees and now have about 45.

Next, she is off to Fiesta Mart for tomatillos, or small, green tomatoes. Jaimes peels open the fruit’s papery shell to find ones that aren’t bruised. She also picks up other vital tamale ingredients: corn husks, garlic, pork, chicken breasts and lard. Then she heads to a makeshift kitchen at the construction company to start cooking.

Beatriz Jaimes mixes masa, or a corn-based dough, for the hundreds of tamales she prepares for her employees, whom she considers part of an extended family.

As she begins to make hundreds of tamales, she says this holiday means a lot to her.

“I think we got blessings from God,” says Jaimes, who fights back tears remembering how tough things were when her family first arrived in the United States. “It was really, really sad, our lives. We were very, very poor when my kids were so little. Our situation was really bad with no money.”

Jaimes says they didn’t know anyone in Texas at first, but today there are plenty of people around. As she makes the tamales, employees stop by to say hello after work.

When Rolando Jaimes, Beatriz’s husband, stops by, he agrees that their employees are like family. That’s why they enjoy keeping the tamales tradition for them.

“There’s people working here that have been working for us for 25 to 27 years,” he says. “They’ve been here pretty much since they were teenagers, and they’re in their late 40s and they’re still working for us. We’ve been pretty successful thanks to them, to their efforts, and we appreciate that.”

And while Thanksgiving is a US holiday, the Jaimes family says they weave in Mexican traditions. Rolando says he even blends in Nochebuena, or Christmas Eve, traditions, too. 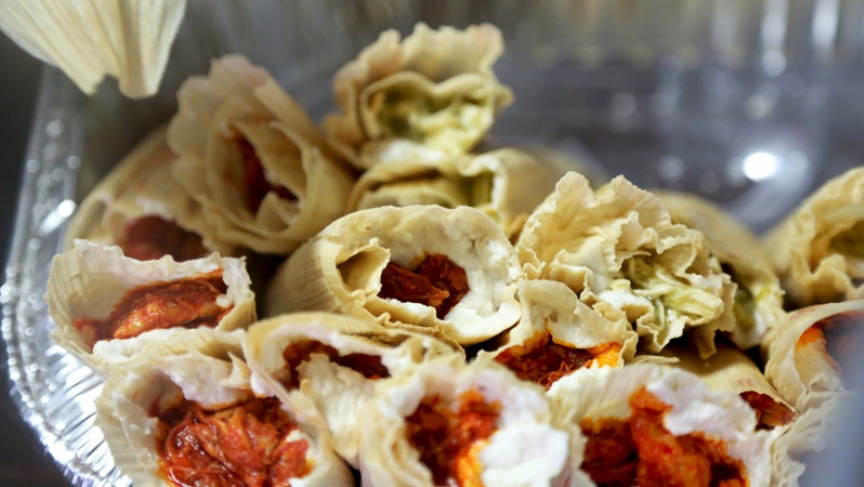 Every year for Thanksgiving, Beatriz Jaimes cooks hundreds of tamales to thank the employees who work for her family's Austin-based construction company.

It’s pig fat, or manteca in Spanish, and it’s often vilified by health purists (unfairly, perhaps, since it contains less saturated fat than butter.) It’ll keep your tamales light and non-crumbly. There are many types out there, but Beatriz Jaimes uses Armour Lard. “When you have something that you know is good, keep that one,” says Jaimes.

Mixing the dough, or masa, by hand is the best way to work in the fat, salt, baking powder and other ingredients. Jaimes’ trick is to add broth from the cooked chicken or pork (for the filling) into the masa. You’ll know your masa is ready if you drop a tiny ball of it into a cup of water and it floats. If it sinks, keep mixing.

If you go with a pork filling, go with cuts that still have skin. It adds more flavor. Jaimes boils the pork, shreds it, and put the meat into the already cooked sauce.

Do this for about 30 minutes in water. It will let you fold the husks easily.