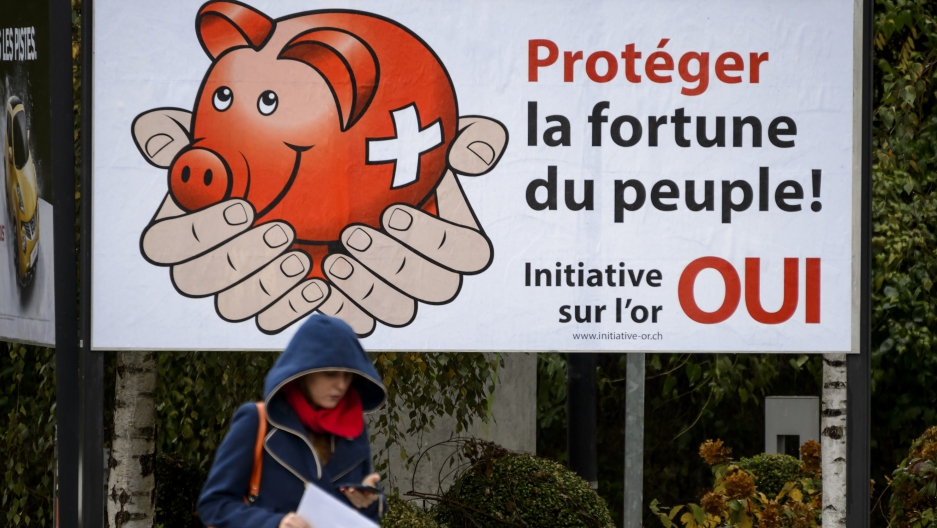 BERLIN, Germany — Switzerland may be best known for its bucolic Alpine scenery, chocolate and banking secrets. But they’re sometimes overshadowed by the country’s traditional policy of neutrality.

Now the controversial tendency to avoid alliances is raising eyebrows again as the Swiss prepare for a national vote on Sunday over compelling the national bank to hoard gold instead of foreign currency.

In one of the country's frequent exercises in direct democracy, voters will have the chance to walk back the country's growing ties with Europe by supporting a “Save Our Swiss Gold” initiative by the right-wing populist Swiss People's Party, the SVP.

Critics believe a yes vote could spell more trouble for the euro zone along with a spike in gold prices.

The proposal would force the central bank to increase its gold stocks to a minimum of a fifth of its total assets. It would also bar future sales, effectively handcuffing the country's monetary policy for better or worse, currency experts say.

It may not come to that, however. Support for the measure has fallen from 44 percent in favor in October to 38 percent early this month, according to a recent poll.

If it succeeds, however, the referendum could hold political implications across the Alps.

On one side of the coin, currency experts like Axel Merk of Merk Investments argue that the move would cut the strings that all but made Switzerland part of the euro zone when the Swiss National Bank vowed to intervene to keep the franc below 1.20 euros in 2011.

By buying large amounts of euro- and dollar-denominated assets, the bank is going beyond its mandate by speculating in the currency markets, Merk says.

“This initiative would not have come up if the Swiss National Bank had not veered away from its traditional way of conducting policy,” he said. “The backlash comes because the Swiss don't want to join the euro.”

On the other, Swiss National Bank chairman has called the initiative “dangerous” because it would make it prohibitively expensive for the bank to protect the franc by forcing it to match any acquisition of euros with a purchase of gold to maintain the required asset ratio.

"The connection between a minimum share [of gold] and a ban on selling which it embraces would very greatly restrict our monetary policy room for maneuver," SNB chairman Thomas Jordan said last week.

The implications go beyond the gold and currency markets.

Coming after a February vote to introduce curbs on immigration despite Switzerland's membership in the visa-free Schengen Area, the referendum is essentially about the country's present and future role in the European Union, says Patrick Emmenegger, a professor of political science at the University of St. Gallen.

“It is a reflection of the mindset that we would be better off on our own and being more isolated from our neighboring countries,” he says.

A yes vote could also boost euro-sceptics in countries such as the United Kingdom and Germany, where the anti-euro Alternative for Germany Party has already drawn fire for instituting an online gold shop that skirts the borders of the country's campaign financing laws.

Specifically, a yes vote could increase opposition to European Central Bank Chairman Mario Draghi's commitment to do “whatever it takes” to increase the bank's balance sheet and protect the euro, Merk says.

“It doesn't have practical implications for the rest of the world, but the debate could heat up in other places,” he says.

After the Swiss voted to curb immigration, Britain's UK Independence Party, or UKIP, leveraged the news to open a discussion about leaving the EU.

“This is wonderful news for national sovereignty and freedom lovers throughout Europe,” UKIP leader Nigel Farage said at the time. “A wise and strong Switzerland has stood up to the bullying and threats of the unelected bureaucrats of Brussels.”

This time, the Swiss banking referendum is likely to inspire critics of the European Central Bank's efforts to stave off deflation through negative interest rates, prompting banks in savings-obsessed Germany to start charging depositors to hold onto their cash.

Across Europe, the economic crisis has raised the stakes in debates about such sovereignty-related issues. Meanwhile, mainstream parties’ reluctance to take up such issues has greatly encouraged the rise of right-wing populism, Emmenegger says.

“These parties come from unpleasant corners, but they articulate things that are very clearly on people's minds,” he says.

More from GlobalPost: How to foil spies in the Snowden era

Two more measures on the Swiss ballot reflect similar isolationist sentiments from the left, although they’re even less likely to pass. One sponsored by the environmental group Ecopop would introduce a more severe limit to immigration at 0.2 percent of the resident population. Another would scrap tax breaks for wealthy foreigners.

Switzerland's low threshold for putting such measures to a vote is yet another way the mountainous country differs from the rest of Europe.

The gold market is already jittery about the prospect that the Swiss bank may be compelled to buy as much as 1500 metric tons over the next five years, equal to nearly three-quarters of all gold mined around the world in a year.

By some estimates, prices could spike 18 percent next week if the initiative goes through.