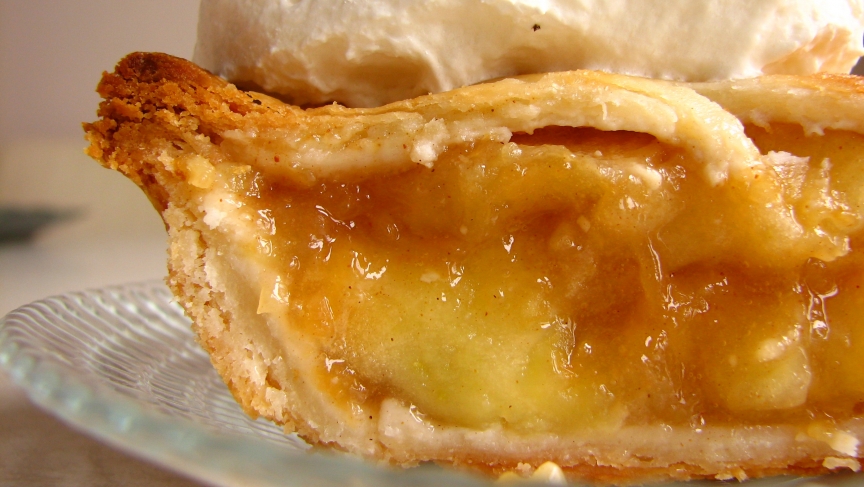 Nothing could be more American than apple pie, right? Well, sort of. But the pie goes back way before the founding of the United States.

It turns out the "American" apple pie dates at least to the Middle Ages in northern Europe, according to food historian Rachel Laudan, who wrote the book, Cuisine & Empire: Cooking in World History.

“Pie came to America with the first English settlers,” says Laudan. "It was an absolutely essential dish in northern Europe from at least the Middle Ages on, and [the colonists] couldn’t contemplate life in the New World without this basic item of their cuisine."

Traditional pies from northern Europe contain just about every filling from fish to eggs, meat to vegetables to fruit.

“Pie, after all, is another word for ‘package.’ Before you have baking tins and pie pans, the crust serves as something that you can bake in. So wrapping something in a crust allowed you to make this wonderful, handy, single meal.”

There’s no clear sense of exactly when apples came into the pie picture, according to Laudan. Still, "by the beginning of the 19th century, Jane Austen the novelist can say, ‘Good apple pies are a considerable part of domestic happiness,’” notes Laudan.

Apples were essential in northern Europe because they would keep throughout the winter. They’re the only fruit that will keep without added sugar.

“They also get turned into hard cider. And where you can’t make wine and where beer is a bit complicated to make, cider is the drink,” the historian says.

Cider was also the drink of the United States until the late 19th century.

“There was a growing movement for beer," Laudan says. "There were a lot of German immigrants and the big beer companies — like Budweiser, Schlitz, Pabst — all were setting up beer brewing on an industrial scale.”

And then prohibition put an end to beer and cider-making. The apple industry also went through a slump, according to Laudan.

She says that's when apple growers "embark[ed] on advertising campaigns and it's said that the tag line, ‘An apple a day keeps the doctor away,’ was one of the advertising slogans to try to persuade people to eat fresh apples."

“She was very insistant when she wrote about [Thanksgiving] that it was to be a meal for all the American people," Laudan says. "It was not to be a national meal celebrated by diplomats or aristocrats or the rich. That would’ve been a French meal and it would’ve had a fancy dessert like a mousse or a crème."

That opened the way for the humble apple pie, says Laudan. "This was to be an American meal for all citizens and ... apple pie and the other pies are citizens' everyday dishes.”