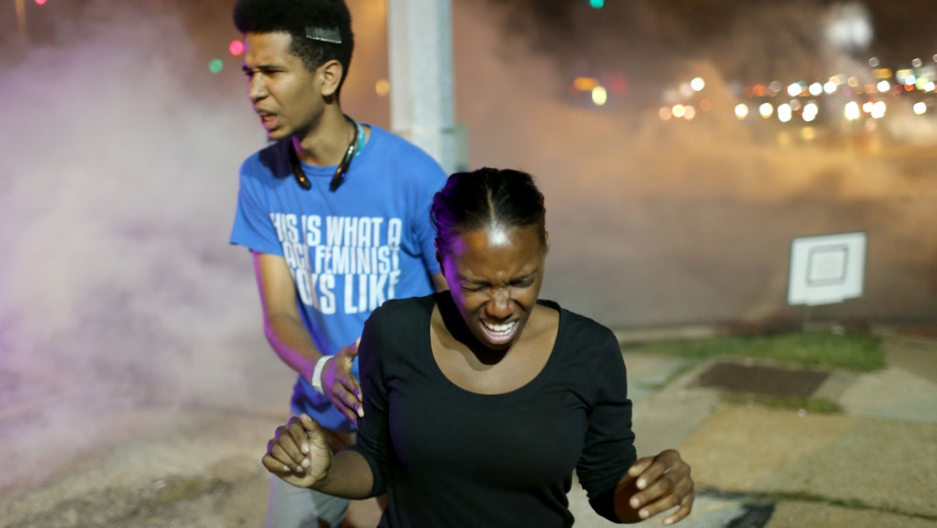 Demonstrators react as police fire tear gas at them while protesting the shooting death of Michael Brown on Aug. 17, 2014 in Ferguson, Missouri.
Credit: Joe Raedle
Share

The world's eyes have turned once more to Ferguson, Missouri, after a grand jury decided Tuesday not to indict Darren Wilson, a white police officer who shot dead Michael Brown, an unarmed black teenager, in August.

The decision sparked a night of violent unrest in Ferguson, with photos emerging of the St. Louis suburb on fire, and its protesters facing off once more with heavily armed police. More than 80 people were arrested overnight.

Brown's story is tragic to so many people because it isn't unusual. According to ProPublica, young black males like Brown are 21 times more likely to be shot dead by police than their white counterparts. For many inside and outside of Ferguson, it's a case emblematic of persistent racial inequality in the United States that remains unaddressed by the justice system.

Earlier this month, prominent activist and scholar Angela Davis pointed out that despite having a black head of state, the United States is far from being "postracial":

Trayvon Martin in Florida and Michael Brown in Ferguson, Missouri, are only the most widely known of the countless numbers of black people killed by police or vigilantes during the Obama administration. And they, in turn, represent an unbroken stream of racist violence, both official and extra-legal, from slave patrols and the Ku Klux Klan, to contemporary profiling practices and present-day vigilantes.

She goes on to point out that the international response to Ferguson "suggests a growing consciousness regarding the persistence of US racism at a time when it is supposed to be on the decline."

But the huge response hasn't stopped Brown's story — that of a law enforcement officer using deadly force against a black youth — from being repeated. Over the weekend, a Cleveland police officer fatally shot Tamir Rice, a 12-year-old boy carrying a BB gun.

Writing for the Toast about the decision, author Roxane Gay eloquently summed up the exhaustion powering the outrage over Brown, Rice, Martin, and the long list of young black men whose killings have gone unpunished:

While the Ferguson story is about race, it's also about guns. Like Trayvon Martin and Jordan Davis before him, Mike Brown was an unarmed young man, perceived as a threat without a weapon.

Officer Wilson claimed that Brown looked "aggressive" and said the 18-year-old "looked like a demon" during their confrontation. Wilson testified that he wasn't carrying a non-lethal taser at the time because he finds them uncomfortable to wear; instead he was armed with mace and a handgun. He also told the grand jury that Brown appeared to reach into his waistband as he charged him.

Back in August, Adam Winkler, a professor of law at UCLA, argued that "the problems of racial harassment and police militarization are exacerbated by the fact that America has a heavily-armed civilian population."

Demonstrators take part in a protest in Washington, DC against the Missouri grand jury's decision not to indict Darren Wilson for shooting and killing 18-year-old Michael Brown.

According to the Washington Post, the US has the world's highest gun ownership rate, and tops other developed countries when it comes to firearm-related murders per capita.

"Because there are so many guns out there, police officers are trained to live in fear of the very people they are supposed to protect and serve," Winkler wrote in the Huffington Post. He pointed out that gun control could help address the problem, since "restricting unusually high-powered weaponry reduces the need for the police to have even more powerful weapons for protection" — but said it would only be part of the solution.

Here are two charts to help you understand where America stands in relation to other developed nations when it comes to gun violence. In the chart above, we see the number of guns in each country per 100 people on the left in blue. On the right, in red, we see how many homicide deaths are caused by firearms in that country, per 100,000 people.

The data used here came from the Washington Post, which compiled numbers from the United Nations Office on Drugs and Crime in 2009 and 2010, the years that had the most complete data sets. They also used data from the Small Arms Survey from 2007, the last year they carried out the survey. It's important to note how tough it is to actually estimate how many guns there are in a nation. As the Small Arms Survey notes:

Differences in national gun culture — each country's unique combination of historic and current sources of supply, laws and attitudes towards firearms ownership — often have distinct effects on the classification, ownership, and perception of firearms, and this complicates the calculation of international figures. The chart above shows which are the weapons of choice for homicides in different parts of the world. The data here come from the UNODC's 2013 Homicide Report. With 60 percent of homicides committed using a firearm, the United States is a large contributor to the high firearm percentage in the Americas.