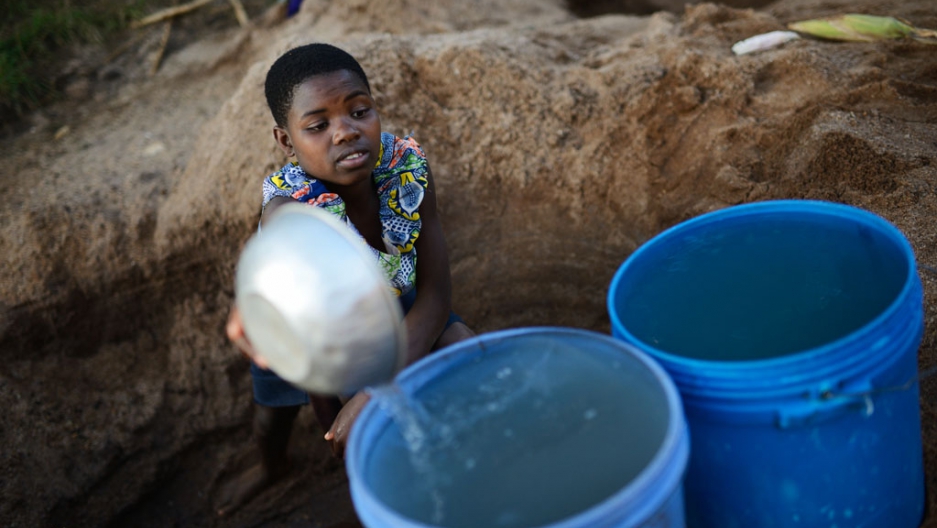 Safina Religious, age 12, collects water. According the Tanzanian government's water point data, Mtumbatu and its ward, Mamboya, have the worst access to water in the district, and yet it was not chosen as one of the initial ten villages for the WSDP.
Credit: Shannon Jensen/The GroundTruth Project
Share

Editor's note: This is Part Three of a series produced by The GroundTruth Project for GlobalPost, funded by the Galloway Family Foundation. Part Four, which looks at whether the project can be fixed, will be published on Monday, December 1.

DAR ES SALAAM, Tanzania — The water sector in Tanzania once resembled the Wild West. The government did little to ensure that every person had access to clean and safe water.

Donors and non-governmental organizations (NGOs) worked to solve the problem, sometimes together and sometimes on their own. But there was a flaw, explained Amani Mafuru, an engineer for rural water supply in Tanzania.

“One development partner can go to a region and then another comes to the same place," he said. "So there was a tendency to favor certain parts of the country.”

In 2006, the Tanzanian government launched the Water Sector Development Programme (WSDP) to do things differently. The rural component of WSDP, which the World Bank began funding in 2007, would build 10 water projects in each of Tanzania’s 150 or so districts. That way savvy politicians couldn’t unfairly draw the money to their home districts, a practice that has kept water access in the country unequal for decades.

The World Bank came into the project with a history of being criticized for its “top-down” approach to development aid — loaning money with strings attached, micromanaging, even dictating the types of water systems a community can choose from. In Tanzania, World Bank leaders were particularly sensitive to that criticism: a push by the Bank in the early 2000s to privatize Dar es Salaam’s water authority ended just two years later in utter failure. Companies had serviced the rich and neglected the poor, those most in need of water.

But when it came to constructing rural water points under the WSDP, decisions were not going to be set in Washington DC, nor in the Tanzanian capital of Dodoma.

Instead, WSDP managers would let communities decide for themselves what sort of water system they wanted to build. A simple gravity scheme to deliver water from a faraway creek? A deep borehole requiring an electric pump? No problem. It was the kind of community-led development that bucked the traditional top-down model.

“You cannot dictate the type of technology. Water is not for the government (to decide), it’s for the people,” said Amani Mafuru, an engineer in the Rural Water Supply bureau who helped implement the WSDP in the Mpwapwa District.

Though government water engineers warned communities that choosing an advanced system could be expensive to maintain, few heeded the advice. In the modern era, Tanzanians have modern expectations. Many want water pumped right to where they live and work, whatever the cost, so they opted for boreholes, pumps and other systems that bring the water closer.

But “that shift of technological choice had its implications,” said Mafuru. Granting rural villages in a way so much autonomy proved to be detrimental, causing the entire WSDP program to lag behind schedule and over budget.

“Communities were given an open envelope: Choose. The money’s not a limit,” said Herbert Kashililah, chair of Water Witness Tanzania. “So they choose Mercedes-Benz without knowing how to drive a manual car. You can’t give a poor man a Mercedes-Benz. He can’t pay to replace the tires, he can’t afford the fuel costs.”

And because the first systems were so expensive, money is now running short to build the rest.

The result, according to a World Bank document obtained by The GroundTruth Project summarizing the progress of the WSDP in January 2013, is that only 10 Local Government Authorities (LGAs) had signed contracts to start working by May 2012. That number accelerated over the next seven months to 102 LGAs under construction.

“Compared to the target of 10 schemes per district, we’re still far from that,” said Philippe Dongier, World Bank Tanzania Country Director. “You’re talking 150 districts in the country multiplied by 10. That’s 1,500 projects, while now we are only at a few hundred.”

Dongier blames the slowdown in part on bureaucracy within Tanzania’s government: initially the Ministry of Water wanted to review and approve each and every project, causing delays. Only recently has the ministry delegated that responsibility to regional governments, which has sped things up, according to Dongier.

The tendency toward high-cost technology and the complications of using private contractors have delayed access to water for hundreds of thousands of rural Tanzanians. To make up for the shortfall, Tanzania’s government and the World Bank solicited nearly $500 million more funding, part of a $1.42 billion total price tag — pumping more and more resources into building rural water points that were supposed to have been completed already this year.

Tanzania’s government and the World Bank say the fault lies in part with the legacy of socialism in Tanzania that instilled high expectations that the government should provide water access near each household.

“This country was socialist and there was a policy of that time that everyone can get water within 400 meters,” explained Goyagoya Mbenna, a top engineer in the Ministry of Water’s Rural Water Supply bureau. “So everyone would like to go not more than 400 meters from his place now, because that’s the policy that was there since independence.”

But is the government to blame if residents aren’t able to maintain systems that bring the water closer to home?

“Now, when our officers go back to home after work hours, some people go and start vandalizing the systems. Our officer comes in the morning and there’s no pump,” says Kakunda. “That was the lesson: that it’s the government’s fault. People thought it was the government’s project, not theirs. So we said, ‘let’s give ownership to communities.’”

But in every water project, there is a third party involved — someone who has a very specific incentive: to build the most expensive system possible.

While socialism left one legacy that haunts the water sector here, the push toward privatization by the World Bank in the 2000s left another: Water projects are designed and built by private contractors.

In the case of WSDP, payment to the contractor who constructs a water system varies drastically: $106,667 for the simplest of projects, up to $266,667 for the most complex. The contractor therefore has much to gain in persuading a community to choose a more complex and expensive project.

Not to worry, says Goyagoya.

“If [the architect] designs a higher design than necessary and the community feels that, they will not assign him the contract. If he causes the project to be very expensive, the project wouldn’t be given to that same consultant.”

But in rural Tanzania, contractors are few and far between. The result: “70 percent of the time, the [architectural] consultant also gets the contract,” Goyagoya admits.

What’s more, contractors and consultants tend to form strategic partnerships aimed at winning each other the most work.

“That collusion between contractors and consultants is always going to happen,” says Kashililah of Water Witness. “They’ll say ‘there’s no water here, you have to drill bore holes.’

And then, ‘there’s no electricity,’ so they say ‘OK we’ll bring a generator from China.’ You create expensive systems so you both can benefit.”

Godfrey Mpangala, a longtime water engineer in Tanzania, gave the example of the village in Singida district in the center of the country.

“The community was told ‘the solution is only borehole because your geographical setup is not favoring other types of technology.’ There was a spring, but they said this spring is likely to be polluted.”

“To me, it was a question of, ‘how could you protect the source?’ instead of digging a borehole,” says Mpangala. But the consultant advised them to drill nonetheless. “Drilling a borehole to supply more than 5,000 people is expensive. And in Mpwapwa, wells are possible. The water table is very high. But no WSDP goes for shallow wells. So why?”

Yitbarek Tessema, director of the WSDP on the part of the World Bank, agreed that “there is an incentive for the consultant to go for a complex, long-term scheme, naturally.”

But he says it’s the government’s responsibility to ensure that communities have the awareness necessary to independently arrive at their own decision about what sort of project to build. To that end, WSDP is at last creating a list of recommended contractors and consultants which communities will be able to refer to. Those familiar with the rural water sector here say it may be too little, too late.

“I’ve been doing projects in rural communities for years,” says Mpangala. “The communities are not informed well, so they don’t make good decisions.”